The Dormition of Virgin Mary the Mother of the Lord Jesus Christ, the Eastern Orthodox Church view and few words on feast origin 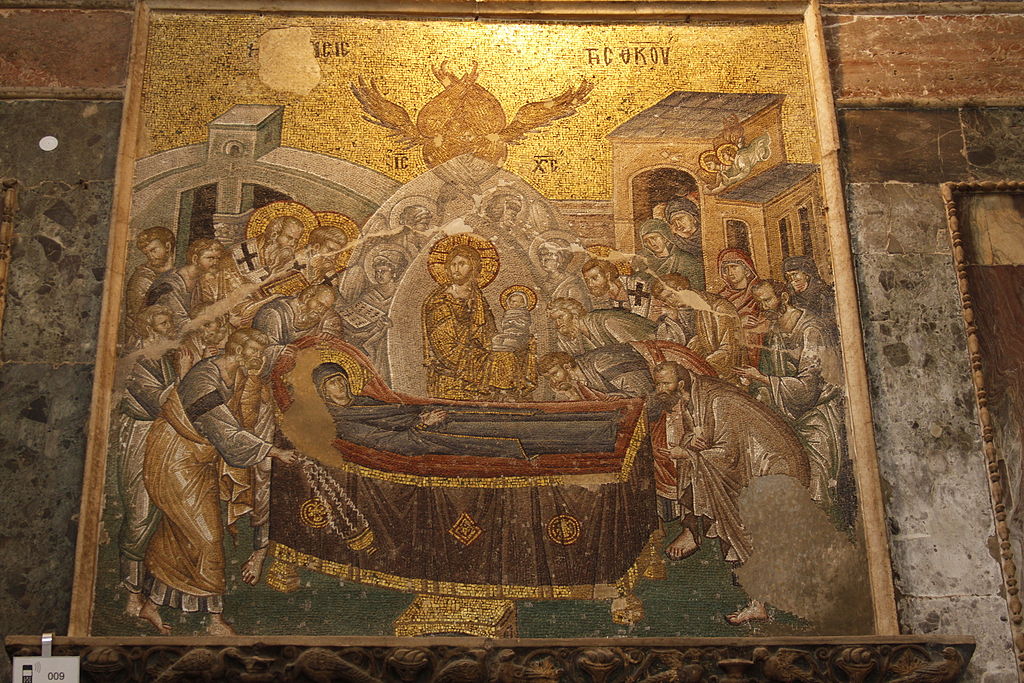 The feast is one of the major Church feasts also in Western Roman Cathic church world known as the Assumption of Mary. The way the feast is venerated varyies, but it is important to say this feast is "The Summer Easter of the Church". In the ancient times the feast has been preceded in the Church by two fastings one for the Transfiguration of God Lord Jesus Christ that was venerated on 6th of August and one week fast preceding the Dormition or the Sleeping like death called in Church Slavonic Uspenie (falling asleep) that the Mother of God experineced before her righteous Soul passed to the Lord Jesus Christ. The painless death of the Mother of God has occured according to the Byzantine author Hypollitos of Thebes who lived in VIII centuryin 41 A.D., 11 years after Jesus's Crucifix and Glorious Resurrection.

The Dormition term expresses the Church belief that Virgin Mary on her death bed has been in a completely peaceful state of the Soul that and did not suffered the terrible pains of death and division of soul and body that each of us the sinners faces because of her extraordinary righteousness and as a blessing of Christ for the ever Virgin, because of her humility and life lived in service of God, and poor and every of her near sides and for her unceasing prayer for the world that she attained even during her earthly life time. The belief of Dormition is not a Bible found doctrine but a Church tradiiton and due to that protestant do not consider it as of a high value but we orthodox firmly believe this was not mention in the bible, because the Mother of God herself unwillingness for glory because she found unworthy compared to the great miracles life, suffering and salvationory plan Jesus completed. The dormition of Mother of God is found in many of Apocryphal writtings which never become official part of the Church canon.

In the language of the scripture, death is often called a "sleeping" or "falling asleep" (Greek κοίμησις; whence κοιμητήριον > coemetērium > cemetery, "a place of sleeping"). A prominent example of this is the name of this feast; another is the Dormition of Anna, Mary's mother.

The first Christian centuries may be silent, but "The Dormition/Assumption of Mary" appears in a Greek document (attributed to John the Theologian) edited by Tischendorf published in The Ante-Nicene Fathers, dated by Tischendorf as no later than the 4th century. Then there is the apocryphal literature such as the Protoevangelium of James, regarding the end of the Virgin Mary's life, though it is asserted, without surviving documentation, that the feast of the Dormition was being observed in Jerusalem shortly after the Council of Ephesus. 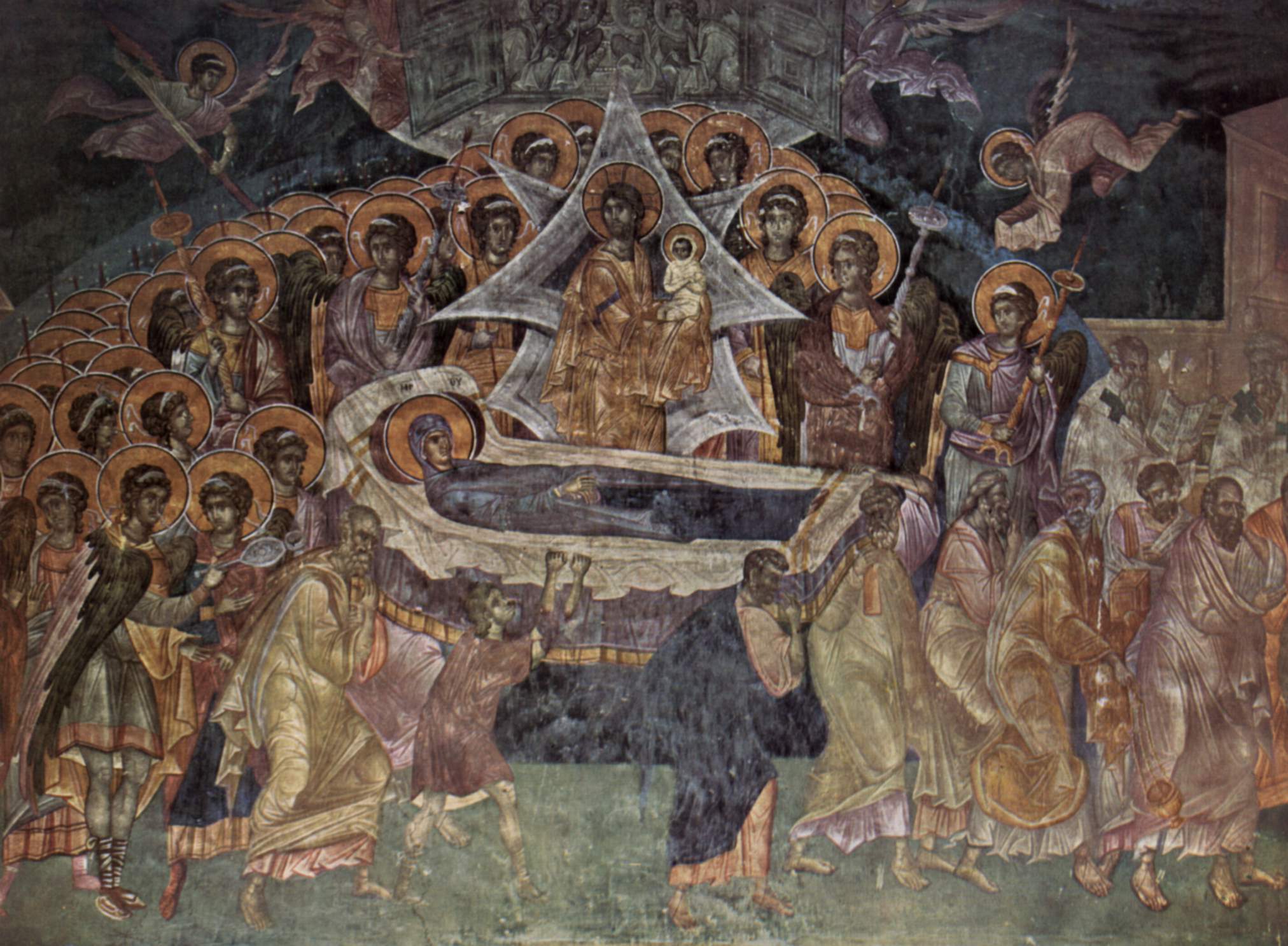 Dormition of the Mother of God, fresco from Gračanica, c. 1321. (See also:Palaiologian Renaissance)

Before the 4th-5th century Dormition was not celebrated among the Christians as a holy day and earlier it was perhaps not celebrated because the Church did not have time to celebrate too much of special feasts, as there was the era of heretics and gnostics from 1st –  2nd centuries which give birth to multiple heresies and the era of persecution that ended just about the 4th century. Only then the Church posessing freedom in the world could review its belief and clearly define the faith as earlier both Bishops (the apostle successors as the layman) was mostly busy with each one keeping their own faith instead of clearly documenting or giving separate feasts, until the 4th century many of the Church feasts of the martyr saints were still not recognized and known in the "Universal" Church around the world, because travelling was not so common as nowadays and each local established church by apostles strives to keep their faith in Christ and not clear up Church dogmas (this gave raise of course to the VII ecumenical councels who followed from 3rd to 8 centuries.).

Epiphanius of Salamis who become bishop of Salamis toda's Cypros (circa 310/20 – 403), a Jew by birth, born in Phoenicia, converted to Christianity in adulthood and lived as a monk for over 20 years in Palestine from 335–340 to 362, writes in "Panarion" (his book on Herisology) in "Contra antidicomarianitas" about the death of the Virgin Mary the following:

"If any think am mistaken, moreover, let them search through the scriptures any neither find Mary's death, nor whether or not she died, nor whether or not she was buried—even though John surely travelled throughout Asia. And yet, nowhere does he say that he took the holy Virgin with him. Scripture simply kept silence because of the overwhelming wonder, not to throw men's minds into consternation. For I dare not say—though I have my suspicions, I keep silent. Perhaps, just as her death is not to be found, so I may have found some traces of the holy and blessed Virgin. …The holy virgin may have died and been buried—her falling asleep was with honour, her death in purity, her crown in virginity. Or she may have been put to death—as the scripture says, 'And a sword shall pierce through her soul'—her fame is among the martyrs and her holy body, by which light rose on the world, [rests] amid blessings. Or she may have remained alive, for God is not incapable of doing whatever he wills. No one knows her end. But we must not honour the saints to excess; we must honour their Master. It is time for the error of those who have gone astray to cease."

"Neither the letter of Scripture nor Tradition does not teach us that Mary had left this life as a consequence of suffering from bodily ulcers." pointing to her sufferless sleep like death.

Our Orthodox Church specifically holds,teaching that Mary died a natural death, like any human being; that her soul was received by Christ upon death; and that her body was resurrect on the third day after her repose, at which time she was taken up, bodily only, into heaven when the apostles, miraculously transported from the ends of the earth, found her tomb to be empty. The specific belief of us Orthodox is expressed in their liturgical texts used at the feast of the Dormition. 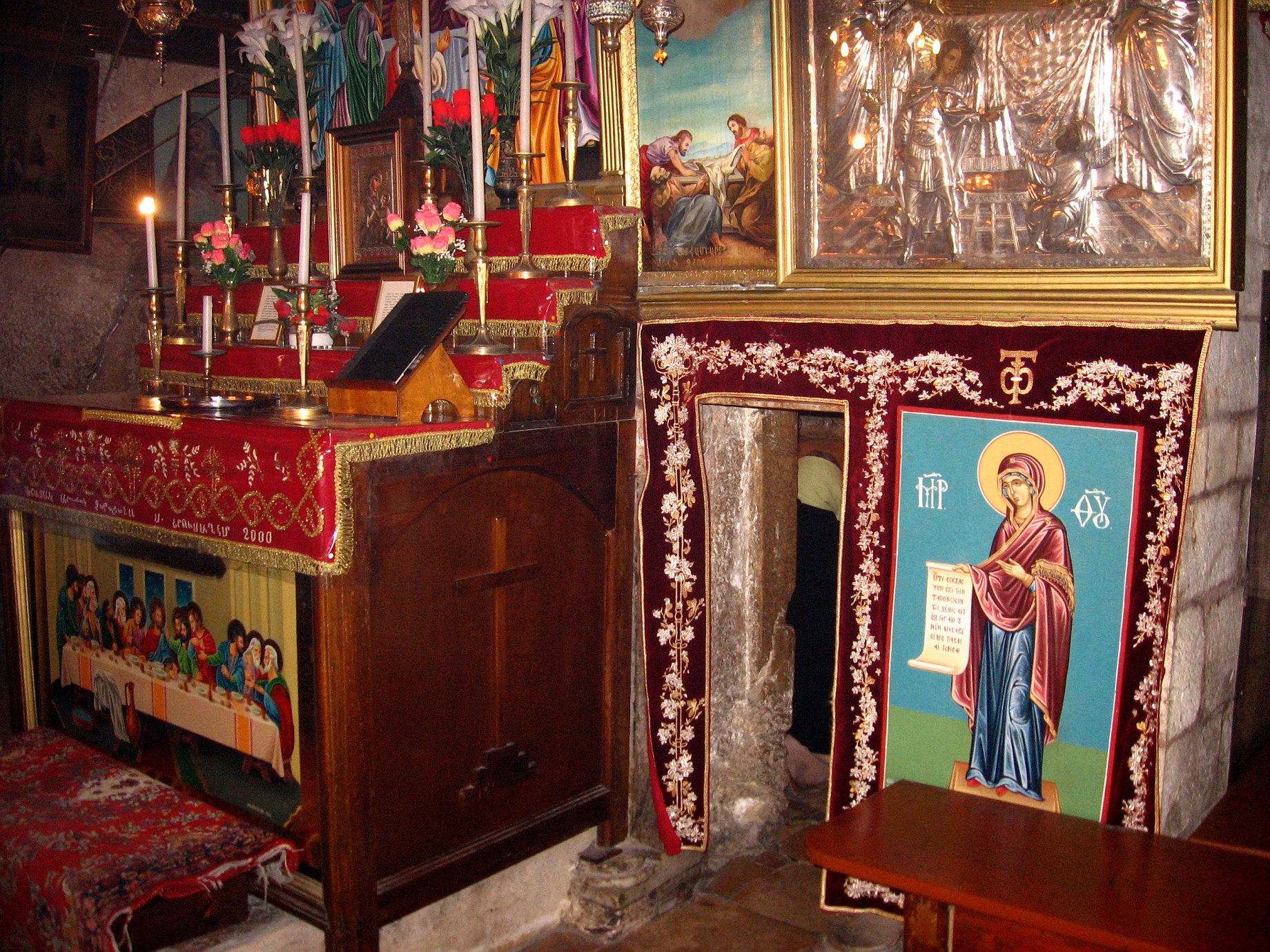 The rock-cut Tomb of Virgin Mary and its entrance, its front side covered in icons; eastern apse of the crypt


The holy body that was taken in Heaven after the Virgin's resurrection 3 days after her Dormition has been originally placed after the burial procession in 41 A.D. in the Church of the Sepulchre of Saint Mary, also known as the Tomb of the Virgin Mary (Hebrew: קבר מרים‎; Greek: Τάφος της Παναγίας) it is located (identified) by historians in the Kidron Valley – at the foot of Mount of Olives, in Jerusalem. 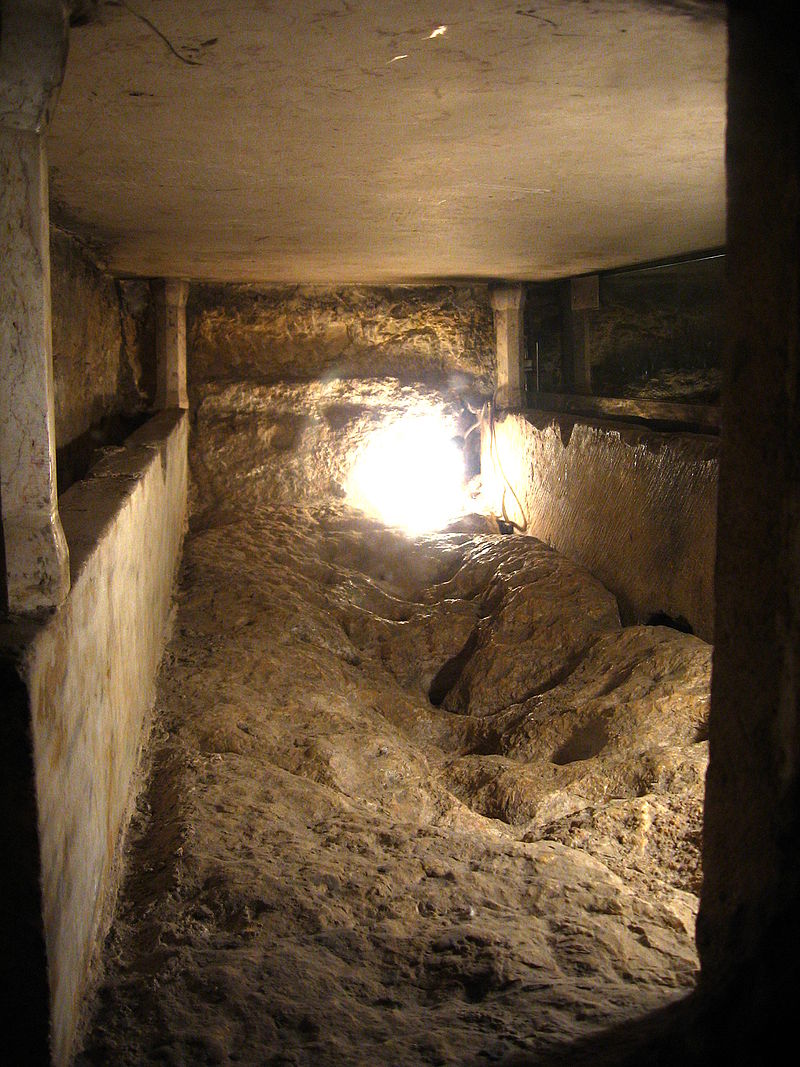 Let by the Holy Prayers of The Virgin Mary Theotokos, we find grace and God grants mercy upon anyone in torture, in fear in bitterness and sorrows, in weakness and sickness, to all broken-hearted, to all the leppers and mind sick and who lay on the death beds be granted with a painless death similar to hers.

Let the Mother of God keep and protect the Holy Land of Bulgaria and All The Orthodox Lands and the rest of lands, villages, cities and all inhabitants on earth !!! AMEN

This entry was posted on Tuesday, August 17th, 2021 at 4:04 pm and is filed under Christianity, Various. You can follow any responses to this entry through the RSS 2.0 feed. You can leave a response, or trackback from your own site.