Some time ago, I've blogged how it is possible to dump a PDF individual pages into JPG / PNG etc. pics.

Today interestingly, I've learned it is possible to not only dump single or whole PDF document pages into pictures but also to selectively dump only the pictures contained within  PDF file into JPEGs.

Dumping only PDF (contained) images into external JPEG files is doable on GNU / Linux with pdfimages.

To extract images of a certain PDF from terminal / console command line it is as simple as:

pdfimages will extract all pictures, but bear in mind with some PDF versions it might incorrectly dump some text pages thinking it is pictures too. Also with some PDFs which contain scanned very old paper documents (as pictures) trying to force pdfimages to dump it will just provide you with all pages of the PDF in JPGs. Option -j instructs dumping images from PDF in JPEG picture format, whether the second argument will save pictures in files like: prefix-of-output-file-000.jpg, prefix-of-output-file-001.jpg, prefix..-file-002.jpg etc.

nautilis-scripts-manager is very nice, but I'm sure many Linux users did not know it yet. It makes possible to add any custom shell script that does an opeartion to be visible in nautilus via one extra menu Scripts. As not normally needed on most Linux distributions, it is not installed by default so you have to install it:

Below is a Screenshot from my nautilus Scripts menu (my locale is in Bulgarian), so Scripts word is in Cyrillic "Ð¡ÐºÑ€Ð¸Ð¿Ñ‚Ð¾Ð²Ðµ" 🙂 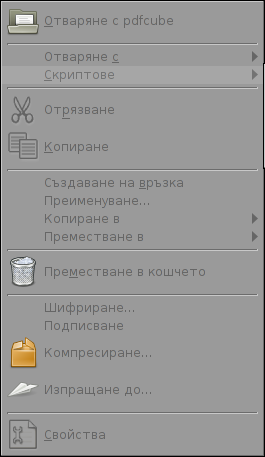 Any script placed inside can be then invoked via the newly appeared nautilus "Scripts" menu. Thus to use extract_images_from_pdfs.sh from GUI place it there.

Well that's all. Once you select a PDF and you click with last mouse button on it selecting Scripts -> extract_images_from_pdf.sh a new directory containing the filename prefix of the selected PDF with _images will appear. For exmpl. if pictures are extracted from PDF named filename.PDF in same directory where the file is present you will get new filename_images folder with all pictures dumped from the PDF.

Well that's it hope this helps, someone. Comments are welcome 🙂

This entry was posted on Wednesday, November 14th, 2012 at 7:05 pm and is filed under Gnome, Linux and FreeBSD Desktop, System Administration. You can follow any responses to this entry through the RSS 2.0 feed. You can leave a response, or trackback from your own site.