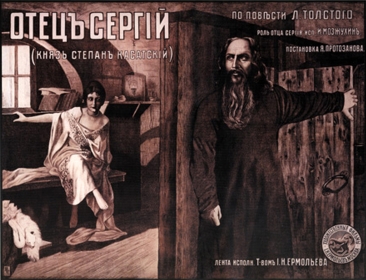 I'm in a "quest",  getting to know Russian Culture and as Cinema is an important part of every nation Culture. I've heard of Father Sergii Movie. The movie is following a plot by a book witten by Leo Tolstoy who is considered as one of the most influential Russian and Worldly poetrists of the 19th century 'till now.

Original book story was written Leo Tolstoy in 1890.  The screening of the movie is just few years before, beginning of the Russian Civil war in 1923 and thus it is an unique piece of cinema to see. The movie still reflects the all Tsarist (Monarchic Spirit) of Russia before the Communist total take over the Monarchic Power in 1923. Besides that the movie is one of the first Russian movies ever produced.

As watching it, I came to the conclusion the movie is of a great quality.
It is evident the Russian Empire was not so undeveloped and future-less as communist Bolshevik's painted it with the many proceeding years of communist propaganda after they did the terrible sin of killing the Russian Tsar with all his family (The Russian Royal Family) in y.  1918. The Tsar was brutally killed with his wife his family and the family doctor and few servants, being shot by Bolsheviks (Communist Guerillas) – with no trial and respect.
Later Tsar Nicolas II and all the Royal Family were canonized by the Russian Orthodox.

Watching the movie one should take in consideration, Leo Tolstoy  himself was preaching anti-Orthodoxy (Anti Orthodox Christian believ) and thus his books – (including the one used as a storyline for the movie)  is preaching a bit of  Anarchistic ideas. His idea about religion was close to certain modern "Protestants" who hold beliefs rejecting Jesus Christ's divine nature. In Church language Tolstoy was a type of Arian in the 19th century.

Here I include the movie in the 6 parts as provided by youtube. Anyone who held serious interest into World Cinema development and more specificly into Russian Cinema history will surely enjoy.

The story begins with the childhood and exceptional and accomplished youth of Prince Stepan Kasatsky. The young man is destined for great things.
He discovers on the eve of his wedding that his fiancée Countess Mary Korotkova has had an affair with his beloved Tsar Nicholas I.
The blow to his pride is massive, and he retreats to the arms of Russian Orthodoxy and becomes a monk.
Many years of humility and doubt follow. He is ordered to become a hermit.
Despite his being removed from the world, he is still remembered for having so remarkably transformed his life.
One winter night, a group of merry-makers decide to visit him, and one of them, a divorced woman named Makovkina, spends the night in his cell, with the intention to seduce him.
Father Sergius discovers he is still weak and in order to protect himself, cuts off his own finger. Makovkina is stunned by this act, and leaves the next morning, having vowed to change her life.
A year later she has joined a convent. Father Sergius' reputation for holiness grows. He becomes known as a healer, and pilgrims come from far and wide.
Yet Father Sergius is profoundly aware of his inability to attain a true faith.
He is still tortured by boredom, pride, and lust.
He fails a new test, when the young daughter of a merchant successfully beds him. The morning after, he leaves the monastery and seeks out his cousin Pashenka (Praskovya Mikhaylovna), whom he, with a group of other boys, had tormented many years ago.
He finds her, now in all the conventional senses a failure in life, yet imbued with a sense of service towards her family. His path is now clearer. He begins to wander, until eight months later he is arrested. He is sent to Siberia, where he now works as the hired man of a well-to-do peasant.

Just few closing impressions to share about – The movie soundtrack which is constituting only of piano. Though the soundtrack is exceptionally simple it is  totally amazingly beatiful! The actor play of father Sergius is also very real something we rarely see in modern cinema. One thing I've noticed of the movie is the ending part, which pretty much in the "spirit of Russian" cinema which follows for many years even to this day is ending with a feeling of "incomplete" (open) ending.

This entry was posted on Tuesday, December 11th, 2012 at 12:01 am and is filed under Christianity, Movie Reviews. You can follow any responses to this entry through the RSS 2.0 feed. You can leave a response, or trackback from your own site.