Every now and then my gnome keyboard layout switcher hangs. When my keyboard switcher hangs I can't switch between my two defined languages English and my native Bulgarian

The hang up of the language switcher is makes switching between my two defined languages impossible until I logoff and login again or kill the current GNOME session with CTRL+ALT+BACKSPACE.

Sometimes logging off again is not necessery so I have to logoff and login to GNOME few times until finally the gnome keyboard layout switcher reacts to an issued change language via Alt+Shift or by clicking on it.

Unfortunately the gnome keyboard layout switcher is not available as a process so there is no way to simply kill -HUP the process responsible for it.

Just until today I couldn't find a way how to restart the gnome keyboard layout switcher when it hangs.

Now today I finally found a way to restart it without restarting the whole gnome session or killing completely the Xorg server.

To "fix" up the keyboard switcher when its not responding, I had to issue in gnome-terminal or via ALT+F2:

As you can see in the screenshot below, one has to press the Move Up button to switch the default order of languages. Once this is done the keyboard layout switcher starts working again. Once working I just used the move up once again to revert back my default language order as it used to be. 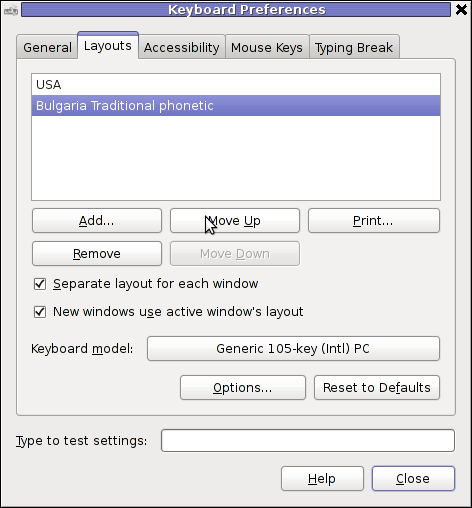 I'm not sure what exactly is causing the GNOME 2 keyboard layout switcher to hang (when it does), my guess is it is due to some kind of version incompitability between gnome versions or configurations specific to my computer. In the past I was running Debian Testing/Unstable and then downgraded back to Debian stable, probably this is the reason of the language switcher hangs.

This entry was posted on Monday, January 23rd, 2012 at 8:27 pm and is filed under Gnome, Linux, Linux and FreeBSD Desktop, Linux Audio & Video. You can follow any responses to this entry through the RSS 2.0 feed. You can leave a response, or trackback from your own site.