Presentation (Introduction) of the Holy Mother of God (Virgin Mary) to the Solomon's temple (at that time of event the second temple) is celebrated on 21th November each year in the Orthodox Church (some Orthodox Churches like Russian / Serbian Orthodox celebrate the feast 13 days later because still celebrating the feast according to the Julian Calendar). Feast is celebrated also on November 21 in Roman Catholic Church but not celebrated in Protestant Church, because the feast is part of Church's tradition and its source of veneration is not the Holy Bible but the apocryphal book the Infancy Narrative of James (Gospel of James) also known as Protevangelion dated from (~ 147 A.D. – 170 AD)

The feast is one of the Great feasts in the Church part of 12 Central Church Feasts;

The feast commemorates the entrance of the Holy Theotokos for a first time into Jerusalem's temple which (for Jewish was the only temple where believed God lived in his full Glory). The Jewish even though gathering in Synagogues to read the Old Testament (Talmud) and pray, does not understand Synagogues in the sense we Christians understand Churches. According to Old Testament given revelation to the Jews, there was one temple holding the (The Ark of the Covenant) nowadays said to be kept in Ethiopian Orthodox Church in the city of Axun. In this temple people went for a special pilgrimage, thanksgiving to God and prayer. The Temple of Jerusalem was a religious site for pilgrimage which is similar to Mecca is for Muslim and  as Jerusalem's Tomb of Jesus (The Church of Sepulchre) is for us Christians. The temple was separted in 3 major parts:
Porch, Holy Place and Holy of Holies. In the Holy Place only priests and priest helpers could enter to service to God and in the Holy of Holies only the High Priest could enter once a year to sacrificy animal according to Jewish Custom. For us Orthodox Christian the High Priest nowdays is the Bishops, Arch-bishops, Metropolitans and Patriarchs).

All believing members of the Jewish community B.C. had to be presented "officially" in front of God in the Holy Temple. When the Holy Virgin was born from the already aged (around 90 years old) St. Joachim and St. Anna. The parents out of thankfulnes to God for giving them a child dedicated their child Mary to God and when Virgin Mary turned 3 years old, st. Joachim and st. Anna decided the time to fulfill their promise and offer the Holy Theotokos to the Lord has come and after gathering other young neighbor girls (which were to introduce Mary) holding lighted torches walked in front of the young Mary.

Remarkably the Holy Theotokos walked straight without even looking back to their parents weeping (as most children does) or felt regret for being separated with parents. It was remarkable miracle showing she was choosen by God to become the Mother of the Saviour when her parents left her on the first high step (out of 15 big steps) leading to the temple, she could climb freely like a grown person without falling or showing any weakness a usual kid would do. As the young girls were singing from the Holy of Holies the High priest being told in advance by the Holy Spirit came out to receive the young kid which later become the Mother of our Saviour Jesus Christ. 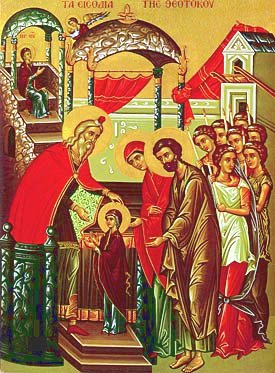 The young Mary run in joy to the hands of the High Priest Zacharias who were waiting her at the gate of the temple with other elders outrunning the other maidens.

Zacharias blessed her saying, "It is in you that He has glorified your name in every generation. It is in you that He will reveal the Redemption that He has prepared for His people in the last days."
Then, Zacharias brought the child (being moved by the Holy spirit) into the Holy of Holies place where only the High Priest was permitted to enter once a year on the Day of Atonement. He placed her on the steps of the altar, and the grace of the Lord descended upon her. The Holy Theotokos arose being overfilled by the unspoken joy that only the Spirit of Truth.

The Entrance of the Theotokos into the Temple signifies her total dedication to God and her readiness for her future vocation as the Mother of the Incarnate Lord.

HYMNS OF THE PRESENTATION OF THEOTKOS TO JERUSALEM TEMPLE

Apolytikion (Fourth Tone)
Today is the prelude of God's pleasure and the proclamation of man's salvation. The Virgin is clearly made manifest in the temple of God and foretells Christ to all. Let us also cry out to her with mighty voice, "Hail, fulfillment of the Creator's dispensation."

Kontakion (Fourth Tone)
Today, the most pure temple of the Savior, the precious bridal chamber and Virgin, the sacred treasure of God, enters the house of the Lord, bringing the grace of the Divine Spirit. The Angels of God praise her. She is the heavenly tabernacle.

This entry was posted on Saturday, November 22nd, 2014 at 2:35 pm and is filed under Christianity, Everyday Life, Various. You can follow any responses to this entry through the RSS 2.0 feed. You can leave a response, or trackback from your own site.