Nokia Communicator 9300i connection via Bluetooth on Debian GNU/Linux Unstable

I wanted to connect my Nokia Communicator 9300i device via bluetooth on Linux on
my Thinkpad running Debian GNU/Linux unstable. By default my bluetooth is disabled
because I usually do not use the bluetooth.
To make the bluetooth back running I had to issue the command:
# echo "enable" > /proc/acpi/ibm/bluetooth
Next the bluetooth-wizard came to play:
# /usr/bin/bluetooth-wizardand then I had to follow the intuitive dialogs,a 4 digit code was generated by my Linux system the whole system was required to be provided
on the Nokia Communicator.
The only left thing is to use gnome‘s bluetooth-applet “Blowse Files” feature.
Here is a screenshot showing up the bluetooth-applet in case if you wonder how the app looks like 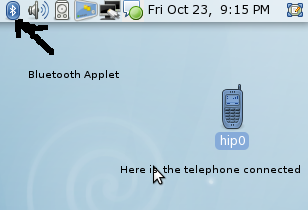 In case if bluetooth-applet is not appearing as an applet in your gnome panel. You might need to:
# /usr/bin/gnome-control-center
– Search for the Bluetooth menu:
Make sure the “Show Bluetooth icon”‘s tick is presented
Last thing to note is that I tried using the bluez-gnome debian package
as a mean to communicate with the Phone unsuccesfully. As far as I could understand
from a couple of posts I’ve red online the Nokia communicator requires the obex
protocol to communicate data. This is not supported by bluez-gnome.
I’ve also red a couple of interesting posts which explained how to usep3nfs to mount your telephone via the unix nfs protocol
There is an old article explaining how to do the mount via p3nfs in Ubuntu which
can be red here

This entry was posted on Saturday, October 24th, 2009 at 12:43 am and is filed under Bluetooth, Linux and FreeBSD Desktop, Mobile Phone Apps & Games. You can follow any responses to this entry through the RSS 2.0 feed.You can leave a response, or trackback from your own site.