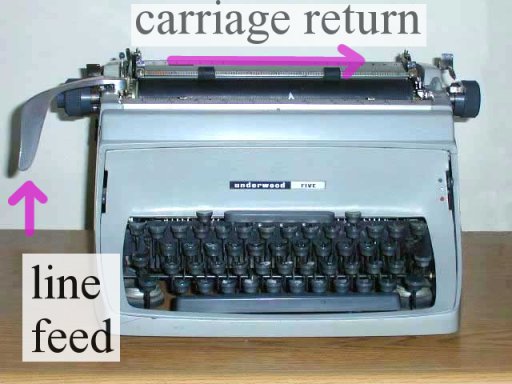 Above line greps for documentroot prints 2nd column of the matchi (which is the Apache server set docroot and then removes any " chars).

However I faced the issue that parsed string contained in $documentroot variable there was mysteriously containing r – return carriage – this is usually Carriage Return (CR) sent by Mac OS and Apple computers. For those who don't know the End of Line of files in UNIX / Linux OS-es is LF – often abreviated as n – often translated as return new line), while Windows PCs use for EOF CR + LF – known as the infamous  rn. I was running the script from the server which is running SuSE SLES 11 Linux, meaning the CR + LF end of file is standardly used, however it seem someone has editted the httpd.conf earlier with a text editor from Mac OS X (Terminal). Thus I needed a way to remove the r from CR character out of the variable, because otherwise I couldn't use it to properly exec tar to archive the documentroot set directory, cause the documentroot directory was showing unexistent.

Opening the httpd.conf in standard editor didn't show the r at the end of
"directory", e.g. I could see in the file when opened with vim

However obviously the r character was there to visualize it I had to use cat command -v option (–show-nonprinting):

To solve that with bash, I had to use another quick bash parsing that scans through $directory and removes r, here is how:

It is also possible to use same example to remove "broken" Windows rn Carriage Returns after file is migrated from Windows to Liunx /  FreeBSD host:

Other way to do remove (del) Windows / Mac OS Carriage Returns in case if Migrating to UNIX is with sed (stream editor).

There is a third way also to do it with (tr) – translate or delete characters old shool *nix command:

For sysadmins who don't want to bother with writting code to convert CR when moving files between Windows and UNIX hosts there are dos2unix and unix2dos installable commands.

This entry was posted on Tuesday, February 10th, 2015 at 11:36 pm and is filed under Curious Facts, Everyday Life, Programming, System Administration, Various. You can follow any responses to this entry through the RSS 2.0 feed. You can leave a response, or trackback from your own site.