On Windows, mostly anyone who has a little idea about computing should know of existence of the famous System Restore.

I'm currently fixing a messed up m$ Windows 7 Acer Aspire 7750, laptop whose Desktop icons has disappeared and it seems it is full of Viruses and Spyware.
ACER notebooks does not have the nice feature of IBM / Lenovo notebooks which has a separate Hidden Partition with Windows 7 Install on it, and besides this the Windows 7 with notebook is licensed to the notebook. So simply downloading any cracked version of Win 7 is not an option. 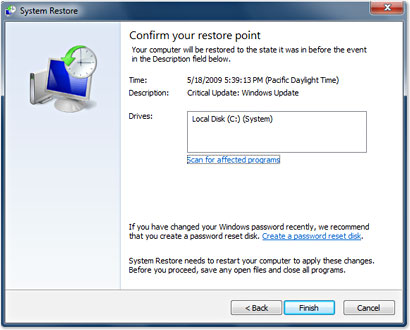 Usually the traditional way to run System menu is by Navigating to menus:

However as the notebook, I'm fixing is in Dutch as well as it is missing Accessories? Start-up menu, I thought of alternative and did a quick search on how it is possible to run System Restore from command line.

So here is how:

Also for me on this Windows 7 Home with Service Pack1, system restore is possible to run by typing in cmd.exe: I just choose the one made auto few days earlier and proceeded with the System Restore. There is a warning appearing before the system restore warning to make backups before proceeding a step further. Then few clicks a Restart the PC Worked 🙂 It is as quick and easy.

Well of course, though Restoration to a previous working state of the Windows worked like a charm. Still the restored version, was having the usual bunch of Spyware / Malware. So I had to clean up also the Spyware with MalwareBytes and Little Registry Cleaner to solveissues within registry caused by malware.

This entry was posted on Tuesday, November 20th, 2012 at 11:41 pm and is filed under Everyday Life, System Administration, Various, Windows. You can follow any responses to this entry through the RSS 2.0 feed. You can leave a response, or trackback from your own site.