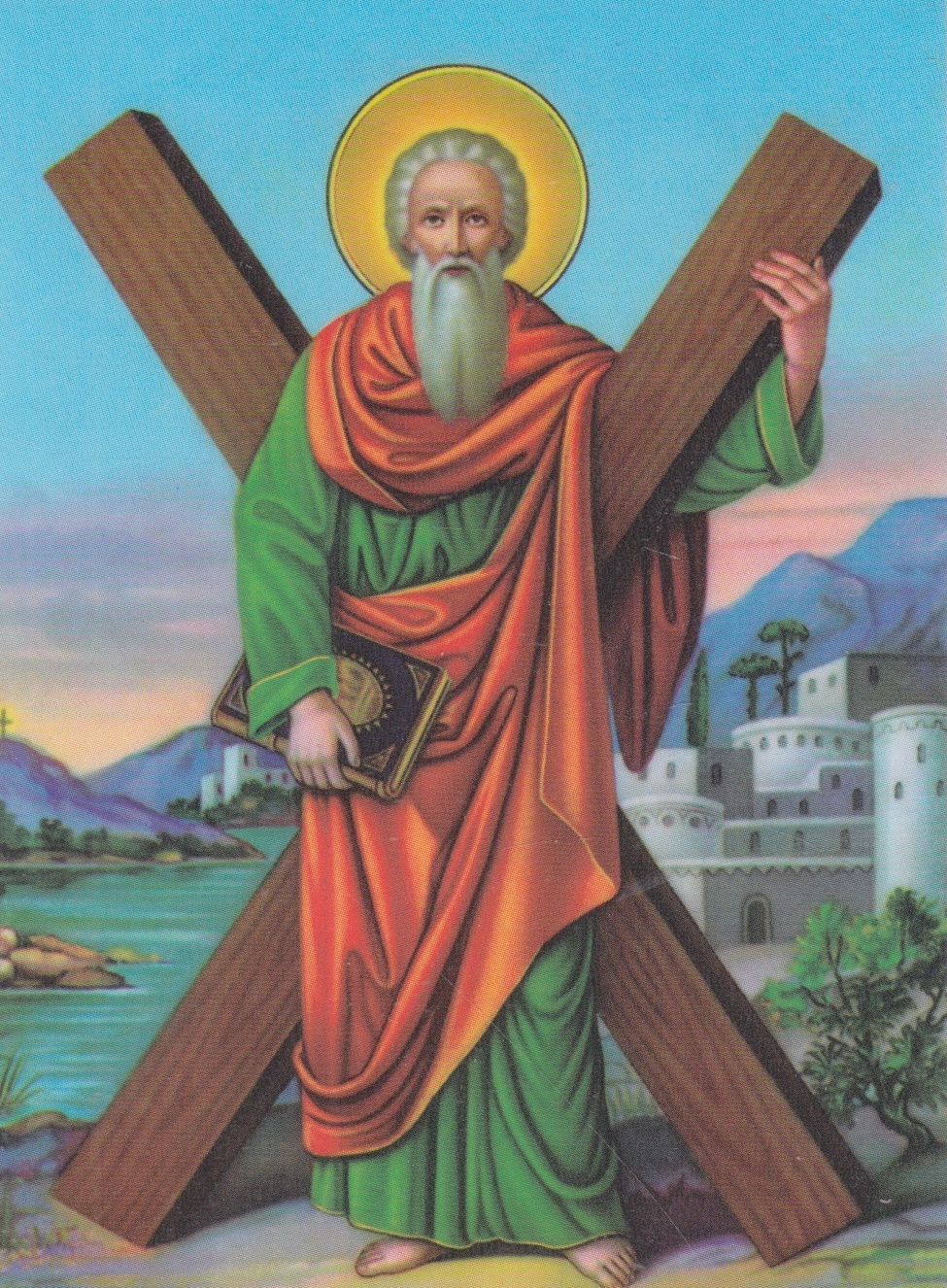 38 Then Jesus turned, and saw them following, and saith unto them, What seek ye? They said unto him, Rabbi, (which is to say, being interpreted, Master,) where dwellest thou?

39 He saith unto them, Come and see. They came and saw where he dwelt, and abode with him that day: for it was about the tenth hour.

40 One of the two which heard John speak, and followed him, was Andrew, Simon Peter's brother.

41 He first findeth his own brother Simon, and saith unto him, We have found the Messias, which is, being interpreted, the Christ.

Andrew, first-called of the Apostles
and brother of the foremost disciple,
entreat the Master of all
to grant peace to the world
and to our souls great mercy.

Let us praise Andrew, the herald of God,
the namesake of courage,
the first-called of the Savior's disciples
and the brother of Peter.
As he once called to his brother, he now cries out to us:
"Come, for we have found the One whom the world desires!"

The saviour Jesus Christ choose saint Andrew (the brother of saint Peter) to be the first among apostles in the number of his 12 (desciples) apostoles. The name Andrew is translated from Greek to Brave / Manhood, there is no known Hebrew or Aramic name as that which means that most likely the name Andrew was perhaps given by him in later times when he preached among pagans.
It is believed. As the gospel tells us he immediately turned to Christ follower and desciple being honored to be the first desciple and among the first that received baptism after Jesus Christ, he was one of the desciples of saint John the baptist (as we and once he heard the "living water" words of the savior he immediately followed without reasoning. 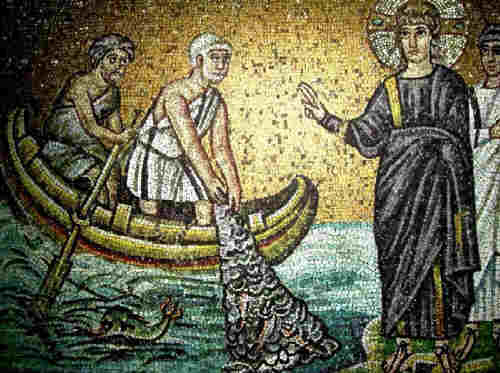 Saint Andrew's birth place according to our Orthodox Christian tradition is the village of Bethsaida on the Sea of Gallee (which has actually the size of a Lake), he was called with his brother saint Peter and promised by Jesus to be made a  "fishers of men" (Greek: ἁλιεῖς ἀνθρώπων, halieis anthrōpōn).
At the beginning of Jesus public life both apostles are said to have occupied the same house in Capernaum. He is believed to be the first bishop and founder of the holy see of Byzantium (later Constantinople today's Istanbul) in A.D. 38 and have ordained the first bishop of the city Stachys. He is known to have preached also among Thracians and travelled through the Black sea shelf (today Bulgarian lands) establishing Christian communities across the shelf lands.

He also preached in today's Greece in Peloponnese, Greece, and Epirus: he converted many to the Faith and ordained bishops and priests for them.

On a boat he entered Georgia from Ajara, preached Christianity in Atsquri, built small church there and left miracle-working icon of Theotokos (the Holy Virgin Mary). Travelling back from Georgia, he visited today Russian lands, went through Kiev, he planted a cross on one of the high hills of Kiev, and he prophesied a city that would have many golden-domed churches, and a bright Christian future for the Rus' people. 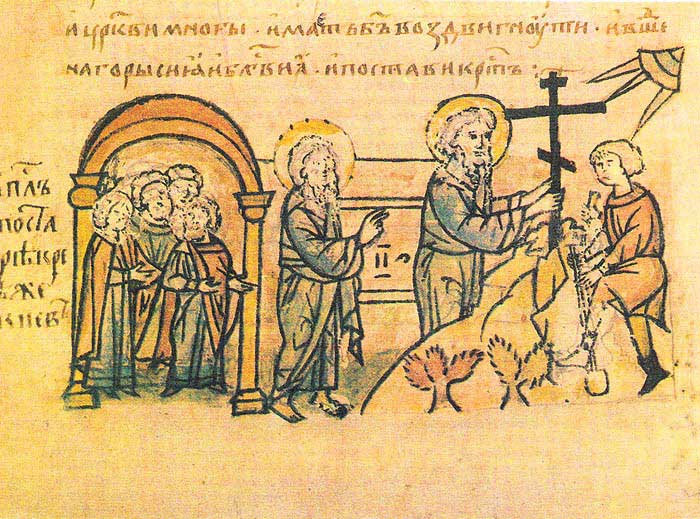 St. Andrew was martyred in Peloponnese, in the city of Patras. The Proconsul Aegeates' family believed in the miracles and preaching of St. Andrew, and the enraged Proconsul tortured and crucified St. Andrew. The new converts wanted to remove him from his cross, but the saint would not allow them. Instead, he comforted them from the cross and as he prayed an extraordinary light encompassed him for about a half hour. When it left, he gave up his soul. It was the year 62 AD.

St. Andrew's relics were taken to Constantinople, his head to Rome and a hand  perhaps transferred from Kiev to Moscow when the Russian capital changed.

Early texts, such as the Acts of Andrew known to Gregory of Tours describe Andrew as bound, not nailed, to a Latin cross of the kind on which Jesus is said to have been crucified; yet a tradition developed that Andrew had been crucified on a cross of the form called crux decussata (X-shaped cross, or "saltire"), now commonly known as a "Saint Andrew's Cross" — supposedly at his own request, as he deemed himself unworthy to be crucified on the same type of cross as Jesus had been. The iconography of the martyrdom of Andrew – showing him bound to an X-shaped cross – does not appear to have been standardized until the later Middle Ages.

Saint Andrew is the patron saint of several countries and cities including: Barbados, Romania, Russia, Scotland, Ukraine, Amalfi in Italy, Esgueira in Portugal, Luqa in Malta, Parañaque in the Philippines and Patras in Greece. He was also the patron saint of Prussia and of the Order of the Golden Fleece. He is considered the founder and the first bishop of the Church of Byzantium and is consequently the patron saint of the Ecumenical Patriarchate of Constantinople.

It is interesting that in Romania there is a cave in Romania the so called Saint Andrew Cave where saint Andrew lived for a while on his journey from Black Sea Shelf to Kiev after he preached the Gospel to Daco-Roman people in province Dobrudja Region nowadays (Scythia Minor), this tradition was a local believe and was not widely aknowledged until the 20th century. 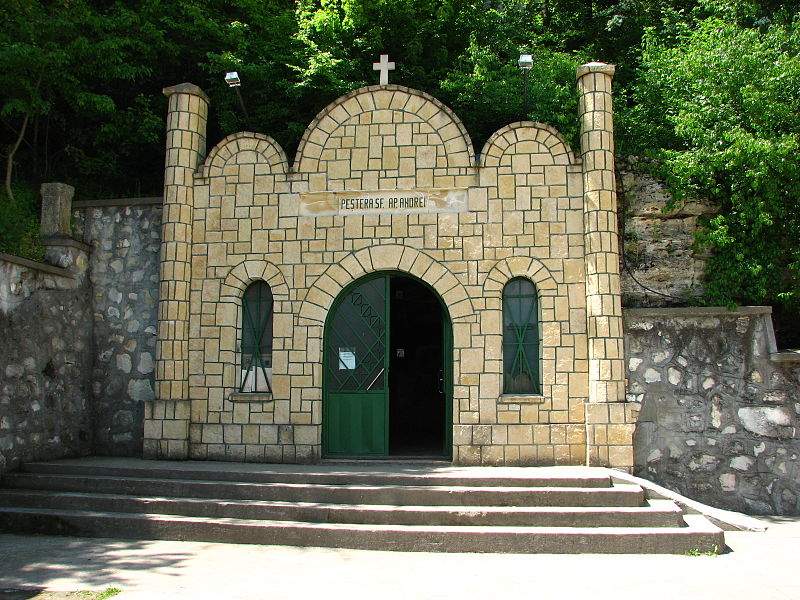 According to Hippolyte of Antioch, (died c. 250 C.E.) in his On Apostles, Origen in the third book of his Commentaries on the Genesis (254 C.E.), Eusebius of Caesarea in his Church History (340 C.E.), and other sources, such as Usaard's Martyrdom written between 845–865, and Jacobus de Voragine's Golden Legend (c. 1260), Saint Andrew preached in Scythia, a possible reference to Scythia Minor, whose territory was part of Bulgaria but was integrated into Romania in the late 19th century.

Let by the prayers of saint Andrew we Christians grow in the understanding and love and be able to withstand the temptations of the hard times we live in!

This entry was posted on Thursday, November 30th, 2017 at 7:33 pm and is filed under Christianity, Everyday Life, Various. You can follow any responses to this entry through the RSS 2.0 feed. You can leave a response, or trackback from your own site.