Saint Therapontius of Serdika is celebrated every year on on May 27 in the Bulgarian Orthodox Church, together with St. Holy Martyrs Therapont of Sardis († 259). He is born and lived in the ancient city of Serdika (today Sofia).

He is part of the nine saints of Sofia, that are celebrated in the Church throughout the Liturgical year.

A little is known of him and just like the martyrologies of much of the ancient saints, we have only few sentences left mentioning his great martyrdom for Christ, along with other local Bulgarian saints. He has a written  celebration service in the Minelogion Church book for  27-th of May.
Minelogion for those unaware is one of the service books used in the Night and Morning services songs and containing services details about the glorified saints for each day of the year. 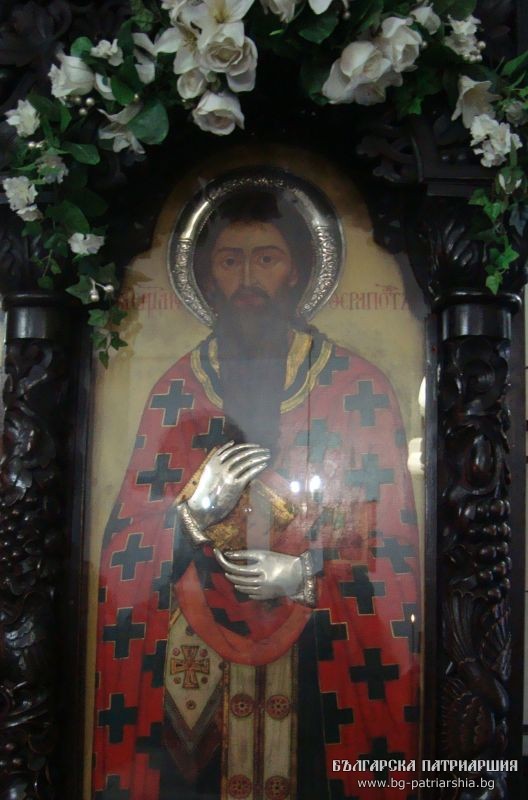 Troparion of the Holy Martyr, voice 4
He became a partaker of morals and viceroy of the apostles
in the way of your contemplation, inspired by God, you have done deeds,
therefore you have faithfully taught the word of truth,
for his faith he suffered even to the point of blood,
Holy Martyr Therapont, beg the Christ God to save our souls.

Saint Hieromartyr Therapont of Roman Fortress Serdika ( Sofia )
The famous Bulgarian medieval historian Matei Gramatik, who was a contemporary of Saint Nicholas of Sofia (a 15h century famous Bulgarian martyr saint) and a witness to his martyrdom in 1555, who wrote his biography with great skill, writes about this holy martyr. There he describes the situation in which St. Nicholas of Sofia lived – both geographically and spiritually.
In his description of the spiritual situation, he gives brief information about the saints of Sofia, including St. Terapont of Serdica (Sofia). He writes:

"When you listen for the inhabitants of Sofia, don't think about the current contemporary ones,
but for the heavenly ones, who were once co-inhabitants of us and now live with the angels.
So forth it is beneficial, to tell about 2 , 3 of them. The holy hieromartyr Therapontius, who
being a citizen of this place and a presbyter of the holy God's Church in Serdika (Sofia), lived filled
with lot of virtues and at the end, during the persecutions of Christians, has been detained by guards
by the lawless for his Christ confession. After a lot of martyrs and being enchained with a heavy
iron chains, he has been put out of the city and on a distance of one day walking, on
this place he was beheaded and henceforth he received a martyrs death for Christ.
They say on the place where his blood was shed, in that time a large oak tree has grown  and it is seen until today and there a lot of miraculous healings occur,
whenever one comes with faith."

Today a part of this trunk of the oak is kept as a sacred relic in the ancient Sofia's capital ancient church "St. Petka", where the memory of the holy martyr is celebrated every year on May 27.


Another Bulgarian saint Paisios of Hilendar / Paisij Hilendarski (1722 – 1773) also mentions in his history book History of the Slavo-Bulgarians states: "There are three holy martyrs in the city of Sofia:
1) St. George;
2) St. Nicholas;
3) St. Terapontius.

This saint was a priest in town of Tran, where many people now go for healing. Where in the Turks has slayered the saint a an oak greaw and with his prayers a lot of healing is given on the place of this oak. Same manner Saints George and Nicholas suffered from the godless Turks during Selim's reign; and their holy relics give healing in this city of Sofia. "

Icon Images of St. Therapontius are known to exist today from the XIX century. There are icons icons in the Sofia church "St. Paraskeva ”, in Pernik, in the church of " St. Petka ” in Sofia, fresco in the church“ St. Dimitar ” in the village of Yarlovtsi, Transko, wherein used to an icon also whose location now is unknown.

In Tran and Godech respectively there were folk customs associated with the saint and therein and in the region he is revered as a healer and protector of the harvests.
There is also a cave in Trun, which is indicated as a refuge for the saint.
A chapel in his name was in the city, burned by the Turks in the 30s of the XIX century.

In Glory of St. Terapontius of Sofia during the Second World War and until 1957 was dedicated the Revival church "Holy Trinity ", today – Saint Great-martyr (Mina)  Menas, in the Slatina district of Sofia. The church was built on the remains of the monastery “Holy  Trinity", according to mouth to mouth tradition kept for ages.

According to the legend, the saint was slaughtered here and this gives some reason to presume that St. Terapontius might have been one of the spiritual fathers who were serving in the monastery at that time.

Let by the holy prayers of Saint Terapont God gives forgives to our multitude of transgressions and grants more Peace, Love, Hope, Faith and goodness to everyone !