Ghost in the Shell I & II – A nice Cyberpunk Manga, Anime movie (must seecyberpunk) 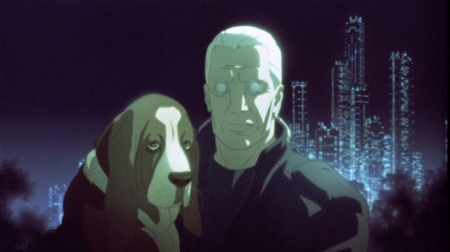 I’ve heard about Ghost in a Shell a couple of days ago from a website which reviewed some cyberpunk movies, I found it as a recommended one for people who are interested into a Cyberpunk movie genre.
As an IT guy for quite some time I have this interest into electronics and therefore my interest into futuristic ideas of a merge between Technology and Bio-organisms.
I just watched the second part of the Ghost in the Shell so I thought it will be nice to blog about it and try to make like a short review on the movie:)

Ghost in the Shell is a Japan movie and as such, always a bit hard to grind by an Europeans.

I should say that Ghost in the Shell had a good Futuristic charge, the only thing I disliked about it that there were too many killings and sometimes it was a bit hard to grasp what is happening in the movie.

The movie is actually a composition of Anime. The exact genre of the animation is actually a cybepunk thriller
The movie has some quite a good fighting scenes, but sometimes is a bit too slow and too much strained but if you have watched another Japanese movies, you will already know that this also part of the charm of the Japanese animation cinema 🙂

Something I didn’t completely liked about the movie was some of the movie characters (Cyborgs and robots etc.) were a bit too rigid, but I guess since they’re an AI, I can assume this is Okay.

The Ghost in a Shell movie tells a story about a futuristic police dealing with electronic security breaches. The main actors in the movie are The Major / Kusanagi,A bio-Cyborg and a pure human, who are equipped and trained to fight technology-related crimes (murders etc.). and consntantly battle in a real world and simulated neural networks, servers, Operating systems, hack into etc.

The referrence for “The Major” consntatly commented in the movie comes due to the movie actor Kusinagi’s past rank in Japanese Self-Defense Forces.

Kusinagi is capable of superhuman feats, and bionically specialized for her job â€” her body is almost completely mechanized, only her brain and a segment of her spinal cord remain organic.

In Ghost of the Shell II includes the character Batou which is actually a bio-cyborg or something and is quite a major actor and a guy that enpowers the movie.

Further on I’ve read that there are also Anime Series of Ghost in the Shell but I still haven’t checked them so I can’t say much about it.

The Japanese movie probably has turned quite a lot of interest in the realm of Cyberpunk fans, since even a novel and video games sprawned inspired by the film.

Even a notable best sellers and top modern movies as the Matrix – by the Wachowski brothers have shared about the influence of Ghost in the Shell I in making the Matrix movie.
I believe this info will be enough for you to get interested into Ghost in the Shell and either buy it or download it from thepiratebay 🙂
The notion of the Cyberpunk presented in the movie is really, really high! So I warmly recommend you the movie if you’re into Cyberpunk!

Tags: Anime movie (must seecyberpunk), Ghost in the Shell I & II - A nice Cyberpunk Manga

Tags: Anime movie (must seecyberpunk), Ghost in the Shell I & II - A nice Cyberpunk Manga
Posted in Movie Reviews | 2 Comments »