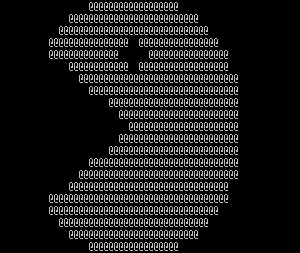 Since just few days ago it was the birthday of Pac-Man game (The abolute classic game among ’80s arcardes).
I decided to try to look if there is an ASCII Pacman available somewhere.
Luckily there are number of ASCII versions of the classic arcade PacMan for both Linux and FreeBSD, I thought,it doesn’t worth the time to check if ASCII Pacman is also available for Windows OS.
For all the ASCII game fans out there I’ve installed ASCII PacMan FreeBSD version on the Play Cool FreeBSD ASCII games free page From there you can play a number of cool ascii art games online via telnet, the reasons I took the time to add the ASCII Pacman to the list of possible games to play is that it’s a shame that the list misses one of the most notable games if not the most notable ever made.

1. The best looking one is probably ASCII Pacman Linux clone game available on sourceforge.net
You can download ASCII Pac-Man 0.9.1 from here

I’ve included 2 files with instructions on installation and usage of the game. I saw that as a completely necessery since,the game controls of the elsely nice looking game are hard to get. To play the game you will need to use the game controls:
z,x – to move right and left and m,k for up and down .

2. A bit more ugly and less interactive is another version of ASCII PacMan called:
Pac-Man for Console or simply Console Pacman

This two compiled without any troubles on my Debian GNU/Linux squeeze/sid Linux .
Unfortunately the up-mentioned ascii version of pacman won’t work on FreeBSD

3. The ASCII Pacman that is running and compatible with FreeBSD is called Pacman ASCII and herein is it’s home page

PacMan ascii is a way less sophisticated, so don’t expect too much of it. Originally Pacman ASCII was a project by some French guy in with the main task to learn C++.
Anyways he did a good job, since his little ascii pacman game is compatible with FreeBSD as well.
You can download ASCII Pacman for FreeBSD here

I did some minor modifications to few of the ASCII Pacman .cpp files in order to change the default help and game language from French to English, since French would be cryptic to most of the non-french users.