Today the 3rd of April in the Patrierchal Cathedral Saint Alexander Nevski in Sofia, the Bulgarian Church has officially canonized the martyrs from Batak and Novo Selo.

The Holy Liturgy in Saint Alexander Nevski that’s been held in the st. Alexander Nevski (Largest Cathedral Church in Bulgaria) has been led by the his All Holiness the Patriarch of Bulgaria Maxim.

The holy liturgy canonization has been also transmitted live in the Bulgarian National Television.
The canonization itself took place right in the end of the Holy Liturgy.
Where the bulgarian leading clergy (bishops, metropolitans archimandrites, the Patriarch himself) has officially announced the decision of The Bulgarian Church Holy Synod to Canonize the Martyrs, who had endured martyrship for Christ in Batak and Novo Selo villages during the April’s Bulgarian liberation revolt in May 1876.

The mini liberation revolt has been extinguished by Ahmed Aga Barutanliqta in the brutal blood-bath according to different historical estimations the murders done by The Turkish mayor Ahmed Aga had been in the range of in between 1750 and 5000 people most of which were an innocent peasants who had voluntary agreed to left behind all their weapons and surrender to the Turkish bashi-bozluk.

Therein in this Church the terrible blood bath occured. The about 200 peasent, martyrs had stood in the Church for a three days, the turkish has digged small holes in the Church walls and shooted through them to kill them, a fire and gas has been used to kill as many as possible, many of the killed martyrs has been little children with their mothers.
The Turkish soldiers (beasts) couldn’t enter the Church because the Church was so filled with layman that the people were pressing the Church doors. 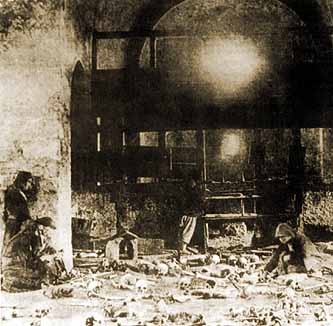 The peasent martyrs had no water in the Church, so they used the float light (icon-lamps) as a drinking liquid and blood of their dead brothers and sisters as a water substitute. The Bashi-bozouk Ahmed Aga ordered that beehives are let in the Church to sting the Martyrs as well as burning straw soaked with gas was throw in stifle the poor peasents.

On the third day all that left alive, went out of the Church, when they found out they’re doomed if they stay in.

All the Batak peasents that rejected to accept the Islam have been beheaded, this are the same saints which has publicly been announced by God’s providence to be venerated as a Church martyr saints Many of the young bulgarian mothers and girls, who have left the Church had been brutally raped and then slaughtered for their faith in Christ.

The Batak blood bath and martyrdom has been so severe and shocking that it horrifyed all Western Europe, Russia and America.

Here is another picture taken in Batak after the brutal butcheries, it depicts the widow wife of the initiator of the revolutionary rebellion
, stading near a writting in cyrilic made of bones reading Remains of 1876 . 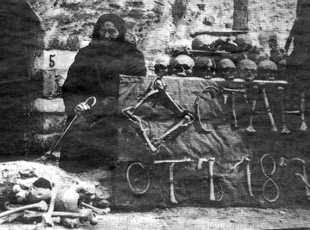 A while after the Martyrdom of the saints in Batak, the turkish army tried to withold the information about the brutal killings, which were absolutely inacceptable for the 19th century.

They tried to burn the Stone Church where they did their bestiality but without any success by God’s providence, next the turkish bashi-bozluks tried to hide about the butchery by burying many of the dead bodies and re-painted the Church laws, however as a miracle of God very soon the martyrs blood which sprinked up the Church laws has appeared on the laws.
A Pilgrim of the newly canonized martyrs could see still the blood of the martyrs preserved there on the Church laws and see the big numbers of relics of the slaughtered martyrs.

Here is the stub used to behead the Batak’s martyrs which is now kept in the Bulgarian National Museum: 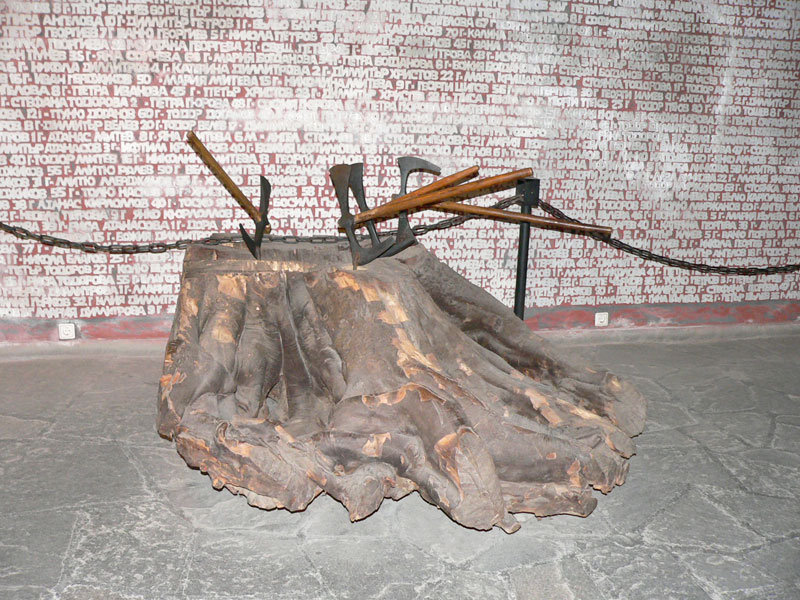 The other martyrs which were canonized on the great feast for our Bulgarian Church were brutally killed 8 nuns in a Novo Selo’s nunnery, they endured martyrdom again in 1876, the Novo Selo (a nearby village).

The newly canonized saints is the last canonization that occured in the Bulgarian Orthodox Church since the canonization in the distant year 1964 when the Church decided to canonize (venerate as a saint) saint Sofronii Vrachanski (st. Sophronius from Vratsa) 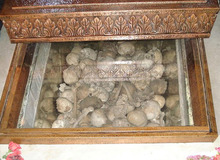 During the Holy Liturgy, an icons presenting the Batak martyrs and the Novo Selo martyrs had been consecrated by his all Holiness Maxim Patriach and head of the Bulgarian Orthodox Church.

The Batak and Novo Selo saints day feast in the Bulgarian Orthodox Church will be celebrated each year on the same day as they endured martyrdom 3rd of April.
His Holiness Patriach Maxim is currently aged 96 and is one of the oldest if not the oldest Orthodox Christian patriarch in the worl today!

A Small chunk of the Batak and Novo Selo’s saints Canonization is available for watching on the address http://www.vbox7.com/play:004f8828

The complete number of canonized saints as martyrs in the Bulgarian Orthodox Church is about 700.

On the canonization festive holy liturgy there were Orthodox Christian representatives of the Romanian and the Russian Orthodox Church.