In the Eastern Orthodox World to which my homeland Bulgaria belongs is deeply saddened and worried about the all time worsening situation with the New Worldwide pandemics which caused suffering and death to already thousands of people. We the Orthodox Christians have the rule that if you can't manage a problem you have to pray God to fix the problem and repent and try to fix what is at your power. This is exactly what pushed the Monks from Biggest on Earth Monk Republic situated on an Island near Greece the Holy Mount Athos to create a All Monasteries Night Vigil for concillation of the The God the Holy Trinity – The Father, The Son and The Holy Spirit with the mankind who has done a terrible deeds over the last 30 years against Gods well known law.

All kind of well known and prohibited sins about which the Holy Church, The Saint Writtings, Church Tradition and The Holy Bible warned us would cause a mass suffering, deaths and a havoc, that their unfollowing will bring. As the warnings and signs given by God to mankind in the form of various Cataclysms especially visible in Italy over the last few years and in virtually all countries has been ignored and the attention of the people was falsely led to material stuff and for the never ending consumer needs by the spiritually highly blind mankind, well it is not strange the payback for the Godlessness of mankind is at hand with the quickly spreading new infectious disease codenamed Coronavirus COVID-19.

Of course atheists reject that and they are giving the result of the Coronavirus to Biological Warfare / animal origin or simply a human hygiene breach, but nomatter that for anyone that has the desire to see it, it is clear that what is happening is one of the many God's mercies to mankind.

As over the centuries many times we were send the Lord, other misfortunes wars and epidemics as an attempt to save us and bring up our eyes out of the material things which are doomed to be gone one day to the Heavenly and All time lasting spiritual things.
Since the boom of the COVID-19 pandemics, Monks from Holy Mount Athos has made a Call to all Orthodox Christians world wide from All the Holy Eastern Orthodox country 14 Churches and every Orthodox Christian on Earth to read every day at 21:00 o'clock psalms and a special prayers to The well Known helper in Epidemics and Deadly diaseses Saint Haralambos (Св. Харалампий) / Saint Charalampos of Magnesia on the Maeander (Greek city in Ionia so called Asia Minor). 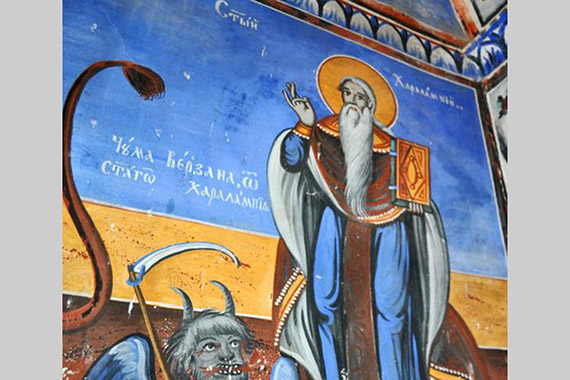 and the Mother of God (Theotokos) called Acathist to Panagia ( Всецарица ) Pantanassa – a miraculous icon of the Virgin Mary from the holy and great Monastery of Vatopedi, Mount Athos, Greece depicting the Theotokos enthroned and holding her son Lord Jesus Christ.

The athonites today decided to pray all night long continuously as they do on a Big Christian feasts such as Resurrection, Nativity and Dormition etc. (which by the way for the Athos island are relatively common but all monasteries all Night vigil together is unique and only happened in most harsh times in human history, where full spiritual backup was necessery).


In each and every monastery just like in every Holy Liturgy served we pray for the inceasingly praying for the sick with Coronavirus, the lonely, the suffering the hungry, the saddened, people in pay for our parents, grandma, grandpas, sons daughters all Nations the God-fearing governmental powers and us the childs of the Holy Eastern Orthodox Church.

This prayer is to be streamed straight from the Monasteries is to be streamed online for everyone who can to be unite to become part of the prayer by listening it and secretly repeating deep in his heart the prayer that is said to be giving the highest goods on earth, the so called Jesus Prayer.

Lets not forget that the Holy Bible and The experience from the Church history and tradition, tells us about multiple epidemics such as Black Death who were destroyed by many miracles for the humility and prayers of the saintly man and the merfiness of Christ and his Holy Mother The Holy Theotoks Virgin Mary and numerous Saints.

It is in the Church tradition in this heavy times of pestilence to make Lithia (Holy Cross Procession, Procession with Miracle making icons, Holy relics from saints) has been used to put an end to the diseases and the God's grace which has been attarcted for the faith of People and their timely repentance stopped the diseases, this can be checked in multiple ancient manuscripts and history books, written by various historions.

Also the story of the paralytic, the blindly born, the lepper, the deaf and innumerous other sick people is found in the Bible and we read that they were easily healed by the savior, so we need to come back to our faith, which we have changed with the Friday lustful enjoyment meet in Discos, Caffeterias, Bars Cinema, Theather and kind of spiritually unhealthy and most of time unusuable activities from the perspective of the Eternal Soul…

Let us pray that this terrible disease who is physically separating us, do on the contrary unite us and bring us spiritual-growth, Knowledge of God, turning out from the sinful habits, thoughts and deeds to do what is pleasant good and wonderful as the Bible says and which has been the ultimate reason why we Human were created in the Beginning.

Lord Jesus Christ son of the Blessed God have mercy on us the Sinners !!!! Lord Jesus Save and Heal the Sick, protect the Healthy, give us repentance, give us your love and strenght, forgive us our terrible sins, be with us always until the End of Ages and in all Eternity !

Ever wondered, why and how America is still officially a super-power? Many people still believe, America has something superior to offer, has some extraordinary scientists, latest technology or plays key role in global economy because of their BIG money. This is one big deception the Truth is America and Americans have no money at all, they live in constant increasing debt.

They constantly issue a financial boundaries to keep the economic balloon continue its artificial bloom. In that sense the constant print of American Dollars by the Federal Reserve is in nothing different with what was happening in the Soviet Union. A super-production, too much currency printing and mega inflation leading to devaluation of currency. The effect is nobody wants to buy the Soviets currency because its devaluated = too low value.

The consequence is the low valued currency can buy less goods and therefore people become poorer and poorer day by day because of the currency crash. The only difference between the Soviet Union and America is that USSR decided to put an end to this growing agony which would sooner or later lead to a civilian war or a huge people rebellion. The globalized economy, if its looked from a helicopter view, suffers from the same problem. As the globalized economy is closed economic system in development.

Though in its early stage globalization leads to many goods like, the decrease of goods costs, the bads its produce are way bigger. Just to name a few of the evils of globalization (ever increasing local unemployment), ever increasing costs of labor unbalanced distribution of capitals, increase of sicknesses due to consumption of products being produced with a main goal of making money.

US Debt Increasing deb will surely lead to GLOBAL ECONOMIC COLLAPSE! Besides that "thanks to Internet" and this kind of medias the local physical communities through which the society used to function are being destroyed and this is probably the biggest evil – direct result of globalization.

Actually probably a lot of people do not realize it but Internet and Mobile Phones are the main "increase" globalization tools nowadays. Also a consequence of Globalism is increased need for people to travel in order to their daily duties, this is also having a negative impact on individuals health (traveling too much is not healthy).

Probably the worsest of all is the pollution. Increased globalization leads to increased pollution, increased pollution leads to climate changes. Climate changes leads to changes in people's attitudes (climate has a slight effect on human attitude). The changed climate is also one of the reasons for increased depression among people…. There is plenty to be said on America and their puppet like orchestration of countries in order  to succeed in America's governors pro-globalist agendas but I guess mostly anyone who is a thinker already has in-depth thought on that too.