I use Debian Linux for my desktop for quite some time; Even though there are plenty of MP3 / CD players around in Debian, I’m used to the good old XMMS, hence I often prefer to use XMMS to play my music instead of newer players like RhythmBox or audacious.
Actually audacious is not bad substitute for XMMS and is by default part of Debian but to me it seems more buggy and tends to crash during playing some music formats more than xmms ….

As most people might know, XMMS is no longer supported in almost all modern Linux distributions, so anyone using Debian, Ubuntu or other deb derivative Linux would have to normally compile it from source.
Compiling from source is time consuming and I think often it doesn’t pay back the effort. Thanksfully, though not officially supported by Debian crew XMMS still can be installed using a deb xmms prebuilt package repository kindly provided by a hacker fellow knuta.

There are also deb xmms built for Ubuntu, so Ubuntu users could install xmms using repositories:

Some of the computer DOS geeks certainly should remember Terminal Velocity / (Terminal Reality Inc. – TRI) DOS 3D Realms (ex Apogee company) game. For those who are younger or for any reason miss to play TV here is a short review. Terminal Velocity is an addictive fast pace 3D Flight Simulator game.
The ship one navigates has a mean to accelerate or down-accelerate flying speed. There is also an AFTER BURNER mode which accelerates the ship movement speed drastically while in use. TRI's AFTER BURNER game feature create unique feeling whilst in game, raising gamers adrenaline and giving feeling of great dynamics 😉
The game graphics are a bit low, the game can be switched between VGA and SVGA from within the internal game menus, anyways for the year 1995 the game graphics looks fine. 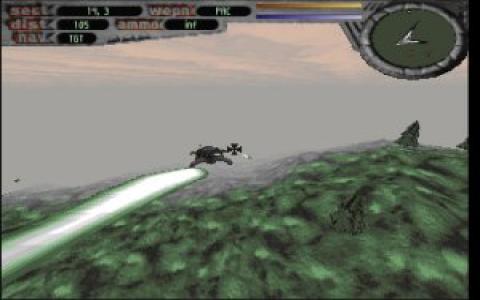 TV supports network games of up to 8 Network Players and for 1995 is among the few 3D games supporting so high number of network players simultaneously. As most of the games of its time TRI supports modem network game play. I don't know about you, but for me Modem Network game DooM peered plays brings up some nice memories 🙂

Every now and then in the levels, there are holes (Tunnels) you can enter, the tunnels is one of the most exciting part of the game as it reminds me tracking mods music culture, Future Crew's Second Reality graphics demo and the rest of the old glorious Assembly Demos – if not familiar with the aforementioned be sure to check the link cause you've missed a lot!

The ability to enter Tunnels while in the midst of the game makes TV unique and sets it apart from the rest of the games which were bombarding the 3D game flight simulator market in '95s. 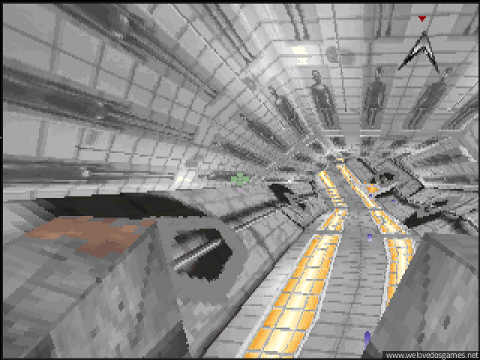 486 with 8 megs of memory.
For SVGA graphics (provided only by registered game version) require 486 DX4/100 or Pentium to display at acceptable frame rate. 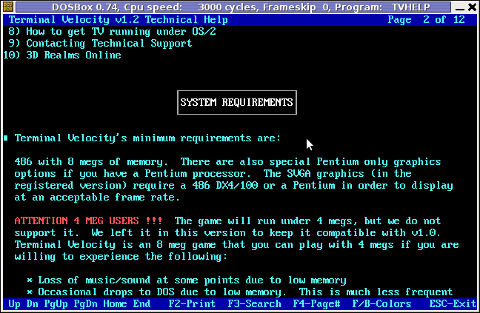 This requirements are nothing and even looks funny while compared to today's available hardware. Nowdays an Android ver. 2.2 OS running (PriVileg) mobile "smart" phone runs at at least 400 Mhz CPU and has a giga of memory.
Its quite interesting to see (from historic point of view) how thoroughful the TV Help manual is, and how well organized software documentation used to be in these old DOS days. If you want to take a look at it launch TVHELP.EXE (you will notice it along with other game .EXE files after extracting)

The game soundtrack is amazingly cool and is one of the main things that add to the great gaming experience.

It took me a while to find Terminal Velocity, as the game download link provided on 3drealms.com/downloads is broken and most of the websites with mirror of 3dtv12.zip file was no longer active.

After about half an hour of search!, I've finally found and managed to download 3dtv12.zip.
In order to preserve Terminal Violocity game from disappearing I've made a mirror of 3dtv12.zip you can download from here

Thanks to dosbox DOS Emulator ,

For all those who want to play the game in the Linux realm, you will have to have earlier installed dosbox dos emulator. Once dosbox is there you can further proceed download / unzip / run and enjoy Terminal Velocity on your Linux Desktop:

Full access on the first call. Simple, short and to the point newuser
questionaire. Over 50 door games online, all of them are registered.

After unzip is complete you will have the following list of files and directories:

The game itself is extracted automatically in TV sub directory. To launch it directly enter TV/ and run GAME.EXE , e.g. 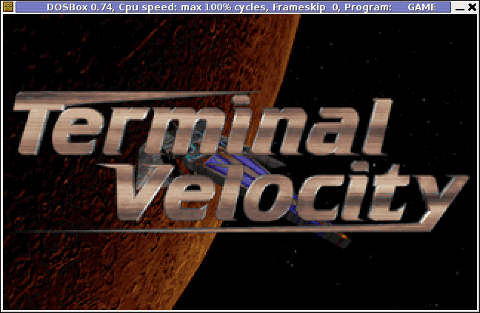 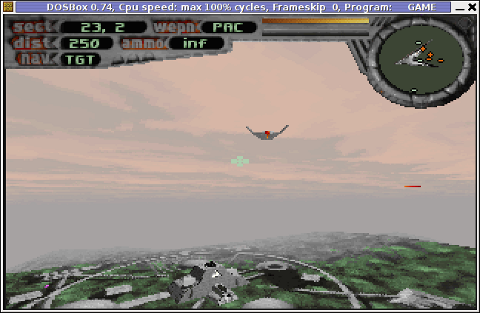 Running the game through the game launcher TV.EXE or GAME.EXE worked but the game sound was missing music and sound FX 😐
The no-music and sound issues were however pretty normal and expected. Back in the DOS era setting your exact Sound Card device type was required before the first game launch.
Configuring the exact screen resolution (EGA / VGA / SVGA) and Sound Blaster or PC Speaker type (Sound Blaster 16 / Sound Blaster Pro) in TV is done through running SETUP.EXE . 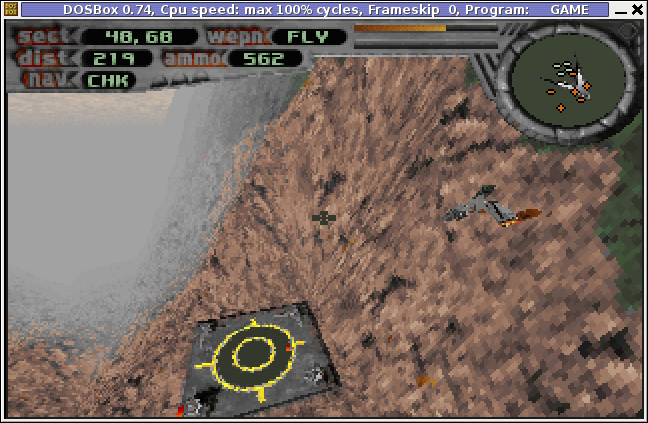 Actually SETUP.EXE used to be like a standard for almost all DOS games I've encountered.

Choosing any of the two SBs produces the same sound / music effects. I guess this is the case becase dosbox emulates a number of sound cards compatible with soudn blaster.
After choosing the SB you should select Save and Launch TV to run the game with sound. 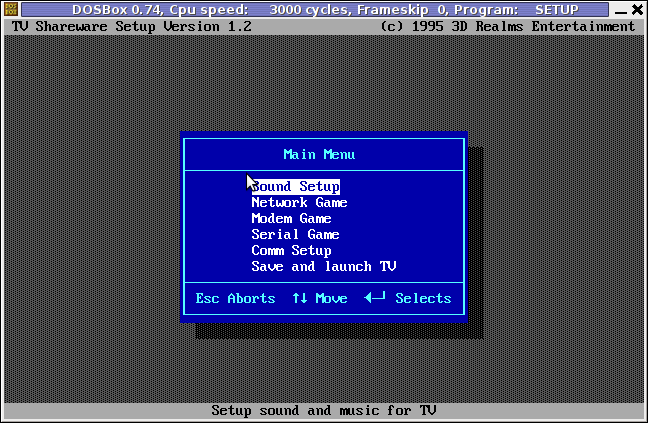 If you quit the game and try to relaunch it with dosbox GAME.EXE unfortunately runs the game without sound fx and music again. Hence the only way to make TRI run properly with music is to everytime configure sound blaster type with SETUP.EXE . TV also supports joystick and it was nice my Genius JoyPad worked like a charm with TV under dosbox emu 😉
To play the game in full screen mode with dosbox press ALT + ENTER simultaneously.

An interesting fact which is not related to the game is Terminal Velocity is a physics term, here is a quite from Wikipedia:

"In fluid dynamics an object is moving at its terminal velocity if its speed is constant due to the restraining force exerted by the fluid through which it is moving."

On 3drealms.com, I've found also a collection of Terminal velocity mod music – tvmods.zip. For the sake of preservation tvmods.zip from disappearance I've made a mirror of tvmods.zip on here

TV has also 20 cheat code words which can be typed in while playing the game for various goodies like Invisinbility, Shield Restore, Power up all weapons, skip level etc. Complete list of Terminal Velocity cheat codes is here
If you're an absolute TV addict and you want to set a TV screenshot on background Check the TV Planet 1024×768 Background resolution

We know 3DRealms release some of their source code for Duke Nukem 3D, I think it is now time to release source of TRI and the other old forgotten games.