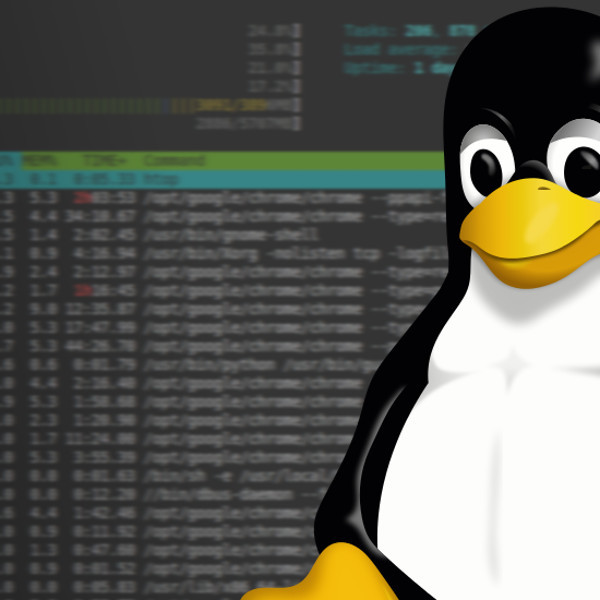 There is one very old but  gold useful UNIX / Linux trick, I remembered which will be interesting to share it's called  it is called disowning.


Lets say you run execution of a job an rsync job or a simple copy job of a very large file, but in the middle of the copy you remembered you need to do something else and thus want to switch back to shell (without opening a new ssh if on remote server) or a new console if on a local machine.
Then how can you background the copy process and move the process to the rest of long running process system list e.g. "disown" it from yourself so the process continues its job in the background just like of the rest of the backgrounded running processes on the system.

Here is the basic syntax of the disown command:

$ help disown
disown: disown [-h] [-ar] [jobspec …]
By default, removes each JOBSPEC argument from the table of active jobs.
If the -h option is given, the job is not removed from the table, but is
marked so that SIGHUP is not sent to the job if the shell receives a
SIGHUP.  The -a option, when JOBSPEC is not supplied, means to remove all
jobs from the job table; the -r option means to remove only running jobs.

Here is a live example of what I meant by above lines and actual situation where disown comes super useful.

The 'disown' command/builtin (this is in bash), which will disassociate the process from the shell and not send the HUP signal to the process on exit.


Of course you can always use something like GNU screen (VT100/ ANSI Terminal screen manager) or tmux (terminal multiplexer) to detach the process but you will have to have run the screen  / tmux session in advance which you might haven't  yet as well as it is  required one of the 2 to be present on a servers and on many servers in complex client environments this might be missing and hard to install (such as server is behind a firewall DMZ-ed (Demilitirezed Zoned) network and no way to install extra packages), the disown command makes sense.

Another useful old tip, that new Linux users might not konw is the nohup command (which runs a command immune to hangups with output to a non-tty), nohup's main use is if you want to run process in background with (ampersand) & from bash / zsh / tcsh etc. and keep the backgrounded process running even once you've exited the active shell, to do so run the proc background as follows:

Hope this helps someone, Enjoy!

How to work around screen “Cannot open your terminal ‘/dev/pts/1’ – please check.”

Most of Linux / BSD user have probably used screen to detach processes to keep running interactive programs in the background.
If you're new to Linux and you haven't heard of or used SCREEN. This is a good time to learn about it, screen is – virtual terminal emulator (manager) with VT100/ANSI terminal emulation support.
I will not enter into details of screen use as this is not the accent of this little article, however if you haven't tried screen yet, give it a try. For more info on screen, check the man; man screen

Sometimes, its necessery to run screen after a change of user identity with su command, for the sake of doing some kind of routing administration, task or for putting screen in use through a simple, admin shell script; for instance:

But instead, errs and exits with:
Cannot open your terminal '/dev/pts/0' – please check.

The error is quite explanatory, screen is unable to background mc due to inability to read /dev/pts/0

Reviewing the permissions, shows /dev/pts/0 is owned by user (root) and belongs to group (tty).
For my user hipo I have no permissions to read or write into the file – (The file is not readable to any user except root and users who belong to the group tty).
To work around the error, its obvious my user needs to be granted permissions to be able to at least read /dev/pts/0 file, because screen needs to read my user /dev/pts/x tty login file.

This would give read/write permissions for my specific /dev/pts/0, however, if you don't know your exact /dev/pts/, better use the tty command:

All tty command does is to return the current logged in user physical or virtual tty file.

/dev/pts/0 file is re-created dynamicly on each physical console tty or remote ssh user login and is calculated on the system in accordance with the number of logged in users. On Linux, different users gets assigned different ttys while a new interactive shell login is initiated.

If for instance on the server, there are 3 users logged in via

Based on the logged in tty, the error above screen produces could vary according to the user tty, for exmpl.:

There are at least, two ways to get around the unreadable /dev/pts/0 file screen problem:

1. Add the user that will be issuing screen, after a su in /etc/group to the tty group:

To do so, open /etc/group and find the line:

in the end of the line add the username to be included in the tty group. For instance to add my user hipo, I have to modify the file like so:

N. B.!!! Be sure, that the user that is added in tty group is really trusted and secured well! Being added to the tty group, the user has access to read all the logging in virtual and physical users on the system. He can even forward messages on each of the users ttys with simple echo command. If the user added to tty group is not trusted and (preferrably used only by the system administrator), he might flood other logged in users shell with junk messages, or any unwanted text with simply:

Like in my case if I'm still logged in as root on /dev/pts/0 and my hipo user is issuing this commands, the messages will appear on my root shell prompt, like so:

2. Change the permissions of /dev/pts/0 with chmod

Onwards press ctrl+A+D to detach the screen and consequently be sure to revert back the /dev/tty/0 permissions to be only readable for root:tty

Bear in mind, that playing with the /dev/tty/x file permissions imposes a serious security risk, doing stuff like this should only be done as a last resort.

Cannot open your terminal '/dev/pts/0' – please check is if you have a requirement to detach a script which needs some interactivity with screen.

Lets say for instance, you have a php, perl or bash which is written to require being run in interactive shell session. Then screen comes at play. The normal way one would do it, is to put:

/etc/rc.local, before the file exit 0 command.

This works fine, if the script is intended to run as root, but most of the scripts are intended to run through a su-ed user, like for example, lets say you have a PHP script which is supposed to run on a Debian, with Apache's default user, group permissions www-data:www-data

This will not work, however cause of the su. To work around this you have two options:

This one-liner will detach script.sh so it continues its interactive stuff in a screen and then revert back the permissions to /dev/tty*
so this doesn't later pose a security issue.

In order to connect to the detached screen, do again:

after the screen session is deteached 🙂

The screenrc was taken was taken from an article, I've red on Redhat Magazine.
Onether beatifying screen behaviour .screenrc file which makes screen be in blue and red is here

By the way, just few months ago, I've found for another great program that is a virtual terminal emulator, like screen but it appears to be way more advanced. The screen alternative program is called byobu, you can check byobu official site here
byobu is available as a deb package and installable from default Debian latest stable repositories, so you can check it by a quick:

Here is a screenshot of running byobu virtual manage: 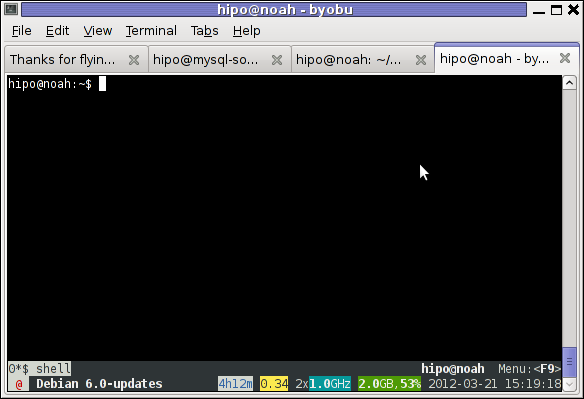 Note that, before you run byobu, make sure you don't have ~/.screenrc (laying in your home directory), otherwise byobu appearance will be exactly like screen.

Hope this helps someone, i will be happy to hear if there are better way to work around the "screen on start-up issue."?

The classical way to keep a process running in background after log out of a shell is using screen
Anyways using screen is not the only way to detach a running process , GNU / Linux and BSDs (Free, Open, Net BSDs) had a command nohup which aim is to run a command immune to hangups, with output to a non-tty

Let’s say one wants to keep track (log) constantly ICMP traffic to a certain host with ping command on a UNIX server / desktop which doesn’t have the screen manager … terminal emulation program installed. Achieving this task is possible with nohup cmd by backgrounding the ping process, like so:

Afterwards even after closing up the opened ssh session or console (tty) / terminal (pts) on which the ping process is background nohup prevents the ping to be sent kill SIGNAL so the process continues running in the background.

Later on to check in real time the statistics of the continuous ICMP ping requests tail, less, or cat can be used for example watching the tail: