Linux release of the game Savage Wheels (Destruction Derby like game) is out! 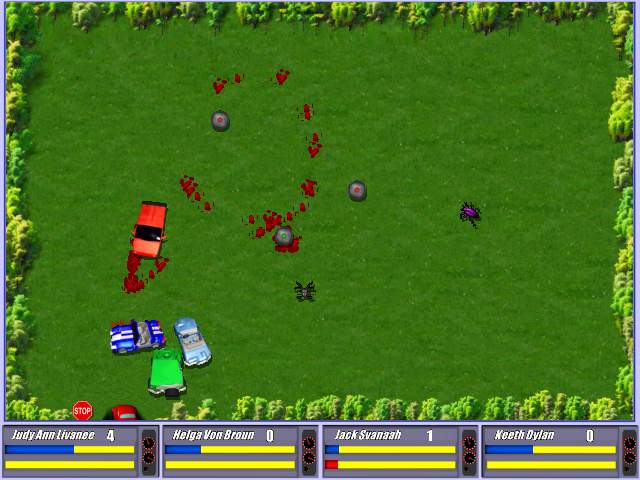 A close friend of mine Pro-Xex (a.k.a. Necroleak) has released Savage Wheels game for Linux.

The Savage Wheels game is a recreation of a game in a way similar to the good old Destruction Derby that most of the hard code old school arcade know very well.

The Savage Wheels has been an existant for a long time for a free download. However for a couple of years the Pro-XeX decided not to publish it’s code publicly, his considerations were that the code is too messy and not ready to go public.

Though the source was there for download, until recently, the game source code was not ready to compile on Linux, though the game’s programming style used is 100% compatible with the Linux / BSD platform.

Right now the game is licensed under the MIT free software license
A few weeks before Peter (Pro-Xex) has contacted me and shared and told me the good news, that he has finally ported the game for the Linux platform and asked me to help him a bit with the game testing!
I thought this is pretty cool, but I was busy until this very day that I actually downloaded the compiled binary of Savage Wheels on my Debian Testing/Unstable (Squeeze/Sid) and gave it a try.

Installing the game was a really easy all I had to do is download the archived binary of the game and untar it into a new directory I’ve created for the game.

It will take like few secs until the game source gets extracted:

To go and start up the game I directly tried executing the game main binary file savagewheels , like you can see below

The error in loading library was pretty unexpected, but counting the fact that I’m one of the first people that test the game on Linux I guess it’s pretty normal.
In order to resolve the missing shared library on game execution It was necessary to copy the libfmod-3.75.so to /usr/local/lib/

To do so I issued as a root user:

In case if you don’t want to copy the libfmod-3.75.so into /usr/local/lib, it’s also possible to use the shell export command to specify the exact location of libfmod-3.75.so to your current known systemlibraries.

If you prefer it that way issue command:

the game poped up in a window.

As I’ve red in the Readme.html file it’s already noted there that by default the game would run in window mode instead of full screen due to some bugs or video drivers etc.
Happily it was indicated in the Readme file that in order to run it in fullscreen, it’s necessary to invoke the game binary with the -force-fullscreen option included, e.g. running it in fullscreen comes to:

At first I was a bit confused when the game poped up before I notice the left side menu which appears could be only reached with the mouse pointer. So I warn you that if you go to give the game a try you will probably wonder how to start up the game after the game entry window with menus appears.

Since the game is so new with Linux it has several bugs to be fixed, one of the bugs is that the Window in which the game pops up by default couldn’t be closed if you press the close window button.

Another thing I do notice is that when I play sometimes during a I crash another car, my car gets stucked for a while.

Another thing which is not very intuitive about the game is the player keys, they could be fount expolained in Readme.html

So Player 1 keys are:

I think giving the player 1 keys are enough for the player 2 control keys take a quick look in Readme.html

Here is the time to tell you that the game music is absolutely awesome!! So the game is worthy to play just because Pro-Xex has present the user with the wonderful soundtrack that is.

I would place the game among one of the best car crash games available currently for Linux, so if you’re a arcade game maniac you would probably have a great time with the game.

If're a Linux user and you need to script certain page extraction from PDF files, crypt protect with password a PDF file or decrypt (remote password protection from PDF) or do some kind of structural transformation of existing PDF file you can use a QPDF command line utility. qpdf is in active development and very convenient tool for Website developers (PHP / Perl / Python), as often on websites its necessery to write code to cut / tailer / restructure PDFs.

On RPM based distribution CentOS / SuSE / RHEL / Fedora Linux to install qpdf, fetch the respective distribution binary from rpmfind.net or to install latest version of qpdf build it from source code.

To build latest qpdf from source


Then to build gather latest qpdf source from here


Once it is installed, if you get error on qpdf runtime:

To solve the error find in your compile directory libqpdf.so.13 and copy it to /usr/lib or /usr/local/lib

if you have time and you like reading be sure to check the extensive qpdf-manual.

QPDF has a vast range of split and merge features. It can combine all the files in a folder (*.pdf), you can use it to try to recover damaged pdf files, extract individual pages from PDF, dump and reverse page range, make new created PDF with old PDF's reversed pages (pages 1,2,3,4 to become in order 4,3,2,1), apply some single pdf file metadata to multiple files.


To try to recover some damaged file with qpdf:

If you’re building (compiling) a new qmail server on some Linux host and after properly installing the qmail binaries and daemontools, suddenly you notice in readproctitle service errors: or somewhere in in qmail logs for instance in/var/log/qmail/current the error:

then you have hit a bug caused by insufficient memory assigned for tcpserver in your /var/qmail/supervise/qmail-smtpd/run daemontools qmail-smtpd initialize script:

This kind of issue is quite common especially on hardware architectures that are 64 bit and on Linux installations that are amd65 (x86_64) e.g. run 64 bit version of Linux.

It relates to the 64 bit architecture different memory distribution and thus as I said to solve requires increase in memory softlimit specified in the run script an example good qmail-smtpd run script configuration which fixed the libc.so.6: failed to map segment from shared object: Cannot allocate memory I use currently is as follows:

The default value which was for softlimit was:

A good softlimit raise up values which in most cases were solving the issue for me are:

The above example run configuration fixed the issue on a amd64 debian 5.0 lenny install, the server hardware was:

The softlimit configuration which I had to setup on another server with system parameters:

If none of the two configurations pointed out in the post works, for you just try to manually set up the exec /usr/bin/softlimit -m to some high value.

To assure that the newly set value is not producing the same error you will have to, reload completely the daemontools proc monitor system.
To do so open /etc/inittab comment out the line:

Lastly reload the inittab script once again with command:

To check if the error has disappeared check the readproctitle process, like so: