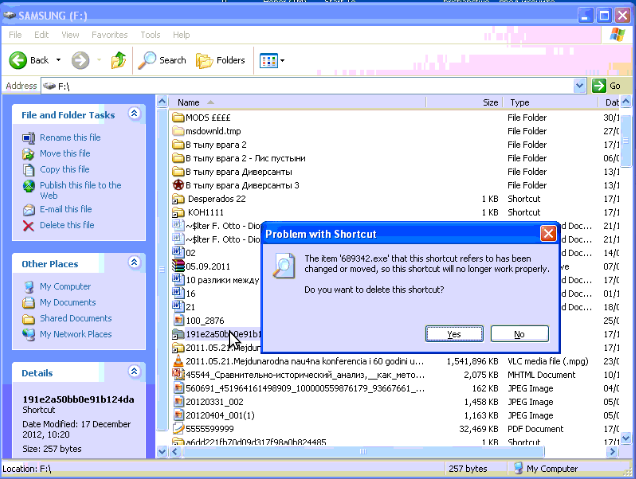 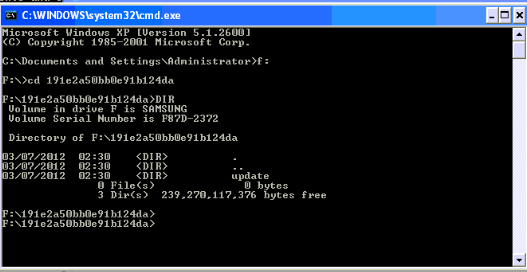 I checked for "autorun.inf", as it is so common nowadays that external Hard Drives and USB Sticks are infected with Autorun Virus variations and my guess happened to be right, there was F:\autorun.inf. As it is with the Autorun Virus-es the file was set the hidden and read-only atrribs. I checked it is there with:

Though, I hoped this would solve the problem, checking f:\ Directories in File Explorer, continued to be showing Folders linked to the unexisting 689342.exe. Then I read some posts online, discussing the weird "Missing Shortcuts" issue and after a while thx God I finally got the fix, which is as simple as: 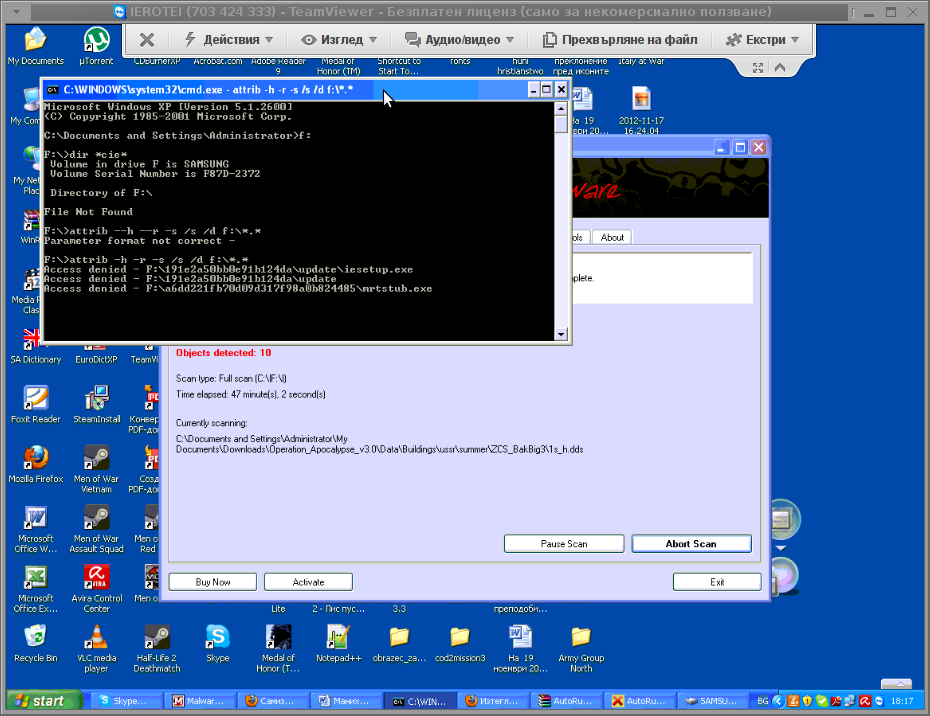 After removing, all of the badware and testing in Explorer, all folders in F:\ were showing as normal.
However, though all looked fine, after the completion of Malware Bytes scan and the removal of catched Malware, just to be sure something has not left as viruses I run oneanother Avira AV scan of all Computer Hard drives and did a Restart. This is it enjoy 😉

The exact error I got in /var/log/apache2/error.log looked like so:

At first glimpse it seems like the message is misleading and not true, however when I switched to www-data user (the user with which Apache runs on Debian), I've figured out the error meaning of unreadability is exactly correct:

This permission denied was quite strange, especially when considering the .htaccess is readable for all users:

After a thorough look on what might go wrong, thanksfully I've figured it out. The all issues were caused by wrong permissions of /var/lib/ejabberd/.htaccess .You can see below the executable flag for all users (including apache's www-data) is missing :

Solving the error, hence is as easy as adding +x flag to /var/lib/ejabberd :

Another way to fix the error is to chmod to 755 to the directory which holds .htaccess:

In the office, some of my colleagues has started receiving error messages, while trying to send mail with Thunderbird and Outlook Express
The exact error they handed to me reads like this:

Here is also a screenshot, I’ve been sent via Skype with the error poping up on a Thunderbird installed on Windows host.

Typing the url http://www.sorbs.net/lookup?xx.xx.xx.xx lead me to sorbs.net to a page saying that the IP address of the mail client which is trying to send mail is blacklisted . This is not strange at all condireng that many of the office computers are running Windows and periodically get infected with Viruses and Spyware which does sent a number of Unsolicated Mail (SPAM).

The sorbs.net record for the IP seems to be an old one, since at the present time the office network was reported to be clear from malicious SMTP traffic.

The error sorbs.net disallowing the mail clients to send from the office continued for already 3 days, so something had to be done.

We asked the ISP to change the blacklisted IP address of xx.xx.xx.xx , to another one but they said it will take some time and they can’t do it in a good timely matter, hence to make mail sending work again with POP3 and IMAP protocols from the blacklisted IPs I had to set in the Qmail install to not check the xx.xx.xx.xx IP against mail blacklisting databases.

Further on to recreate /etc/tcp.smtp.cdb and reload the new cdb db records:

Onwards, the sorbs.net IP blacklist issue was solved and all office computers from xx.xx.xx.xx succeeded in sending mails via SMTP.