Earlier I've blogged how to fix NULL error appearing in comments box, when someone tries to comment in WordPress (Comments) section. As you can read from my previous post the whole issue, was caused by wordpress-threaded-comments plugin which as of time of writing this post is incompatible with modern WordPress versions.

Recently one of my blog readers Jem, reported the same NULL comments issue happens again in my WordPress (thanks for that Jem).

Over the last 2-3 months I didn't added or removed plugins from my wp blog, so I excluded the possibility that the error, might be due to Enabling new plugins.
Since I only blogged in those 2-3 months it was completely, incomprehensible for me why this NULL comments err happens again?

I've remembered, that few months ago along with the last changes I made to my blog, was enabling FCKEditor, for comments to aid Comments with possibility to change easily, font size, add color or make bold and italic their comments, ie. – for those who didn't tried yet FCKEditor yet I warmly recommend you this plugin, below is a screenshot of FCKEditor from 1 of my comments: 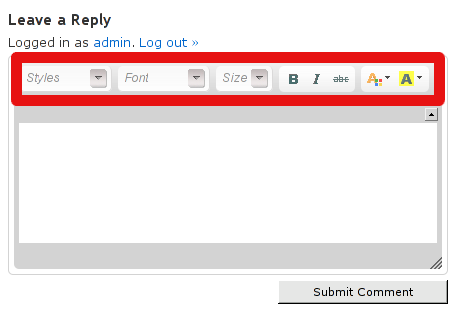 As I supposed, the problem might be caused by FCKEditor (advanced comment editor) wp plugin. I tried disabling the plugin, to see if this will solve the issue. Contrary to my expectations, the same NULL error kept hanging in the comment. However as the html form for default WordPress Comments is simplistic instead of displaying the NULL in comments box, Comments form was blank, with no ability for the user to type in anything. Here is the screenshot of it: 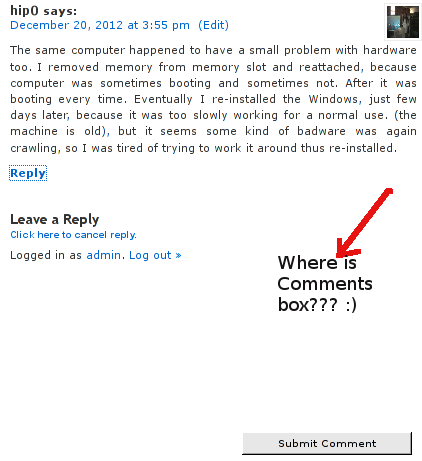 I pushed forward, to look for what is causing, the strange occurance since it is not directly caused by some conflict with my installed FCKEditor (latest stable version). Checked if I can find something on the internet, but for my amazement the first result I found in Google was actually, my own previous article on Fixing NULL Comments box error 🙂 The rest of the threads, I've saw were not so helpful. So finally I've got the idea to check in the Source Code (CTRL + U) of the returned page with the empty form box. Guess what I found there, a reference to TinyMCE Advanced WordPress editor. I've remembered some, very long time ago. When I started experimenting with WordPress plugins and still was new to wordpress, I've used TinyMCE instead of FCKEDitor which later started using as a substitute for TinyMCE, cause finding it to be more advanced and hence more useful.
Back in the time when I was still using TinyMCE, I found a little TinyMCE addon plugin  called TinyMCEComments, the function of TinyMCEComments, was to add the TinyMCEComments originally available inside snf only to wordpress logged in Administrator user to the non-registered subscribed users (e.g. beautify user comments box with allowing them to easily make comments text bold and Italic etc.).
It seems, even though I switched on to FCKEditor at some point in time and hence switched off TinyMCE plugin from Administrator's 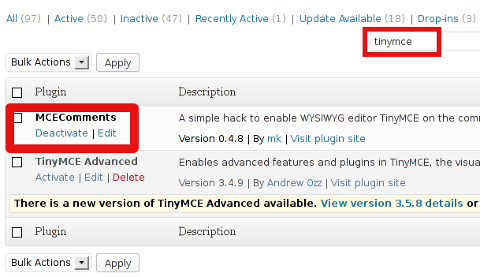 Henceforth, the NULL fix is to Deactivate MCEComments. 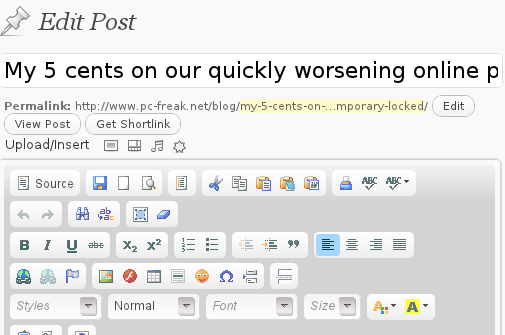 I have recently installed a new blog for my younger sister and thus am establishing a number of handy plugins to make her blog more convenient for writting posts etc.

The default text editor embedded with the default wordpress install is very unflexible and thus I looked around on the net for good substitutes which will enable my sis to feel a bit like using MS-Word.

The plugin that “made the day” was FCKEditor . The installation of the FCKEditor plugin is just like any other easy to install wordpress plugin and in newer wordpress installations for instance in ver. 3.1 it can be searched directly online and installed with 2 simple clicks.
After the plugin succesful installation I enabled it and voilla, that was all. The plugin automatically overwritted the default wordpress html editor and added up a dozen of edit buttons like you can see in the screenshot below: