As some who were in Bulgaria already know there is this new set metal / rock / underground feast called July Morning that started from years in Communism in Bulgaria but has a strong relation with pagan feasts being celebrated before Bulgarian inhabitans were baptized and Bulgaria become enlightened Christian land.

With recent serious attempt to resurrect all paganism under a new packaging through metal / rock / rap culture festivals and the rise of rebellion against the system by so many young peoplewhich started in America in the late 1960's by the Peace Anti-War / Hippy movement the tradition of rebellious and mixed head young people has quickly spread over all the lands which had a severe American Anglo-Saxon influence and after the fall of the communist-system and shortly before this influence born the so called July Morning a feast to receive the first Sun light on every 1st of July while camping near some of the beatiful Bulgairan beaches.

Young hippy / metal / rock / hardcore / techno people as well as other alternative people from all fields of undeground music and other sub-cultures from all places from Bulgaria and even abroad gather to have fun drink and enjoy the night and stay awake 'till early morning on 1st of July, then by tradition they play Uriah Heep's July Morning being inspired by the first Sun lights while others headoff themselves with inhuman quantities of alcohol, joint and other soft-drugs.

As Kavarna become over the last 5+ years, "The rock capital of Bulgaria" and a whole Europe famous metalheads destination the need for contra reaction from traditionally Eastern Orthodox Christian Bulgaria become so evident that one of the famous priests in eparchy of Varna – father Vasilij Salemet (A Besarabia Bulgarian Gagauz) who serves as a priest in Kavarna by God's great providence decided to start a new counterfeit tradition to give glory and prayer akathist to the double feast of ancient Christian healer twin saints Cosma and Damian (A.D. 287) known as Unmercenaries because of their refusal to accept any money for healing and The Transportation (Return) of Holy relics of the Greatest Bulgarian Saint John of Rila in 1195 from Tarnovo to Rila Monastery. 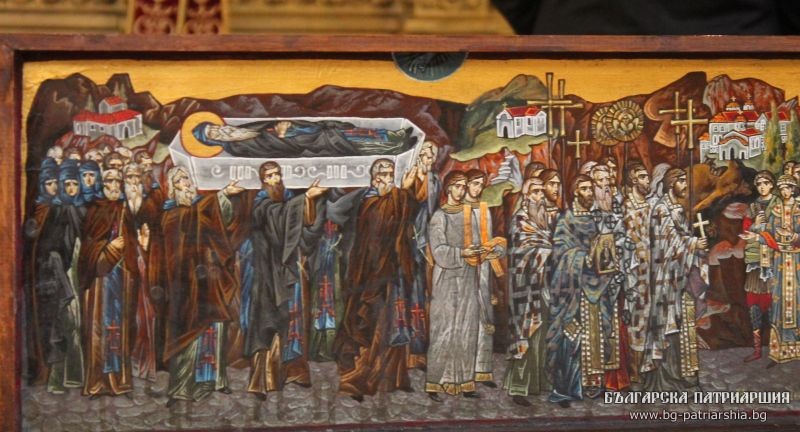 This too significant Christian feasts providently coincided with the Secular July Morning and this was a good reason for setting the Eastern Orthodox Christian litia procession "march" antiope to secular July morning is the fact that in Kavarna on the Chirakman peak cape nearby the sea is situated an enormous sized ancient Basilica which was in favour of st. Cosma and Daminos. The Christian july morning started 5 years ago by the initiative of father Vasilij's laity from the Church in honour of The Dormition of the Most Holy Virgin together laity from saint Nicolas Varna Church and people from Varna's Orthodox Christian enlightenment Center archangel Michael which btw is also famous for organizing the Week of the Eastern Orthodox Christian book and other events who aim to help people understand the Truth and Light of the Lord Jesus Christ teaching and his established Holy Church, the Holy Eastern Orthodox Church.

In the event by tradition also the famous in Varna father Vasilij Shagan was present and he give a short talk on the topic of Today's world disintegration and the importance of the teaching of the Lord Jesus Christ which called all for spiritual unity in faith of his Holy name through His established Church with his own blood on the Golgotha Cross.

A notable guests was  young people from Varna and Dobrich region, father Dimitrij who is priest in Moldovan Besarabia city of Bolgar as well as we had the blessing to have father archimandrite Konstantin an abbot of Patleina Great Preslav  / "Veliki Preslav" monastery which is either the most ancient monastery in Bulgaria or among the 3 most ancient established after the Baptismal (Christianization) of Bulgaria in 864 A.D.

The host of the Orthodox Christian July morning event was father Vasilij who as always was very hospital and settled all the guests in the few Church rooms situated nearby the Church building on the second floor of a caffeteria building. 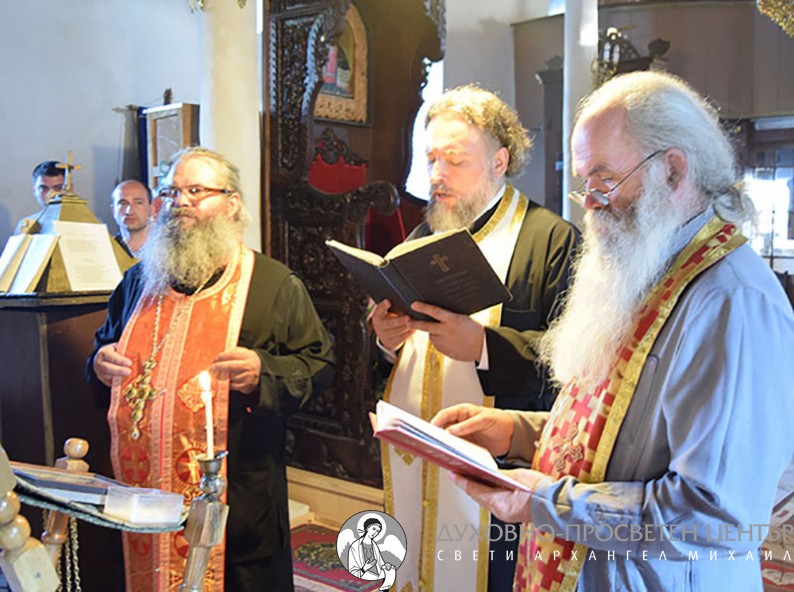 Akathist to Saint John of Rila, the Klir singers back left

The whole prayer event started on 30 of June with an akathist to Saint John of Rila in order to honor also our great Bulgarian saint this year there was no vesper or a night vigil because the people were already too tired as some of the believers came in mid day on 30th and already went to Chirakmana (hill like) cape Basilica Saint Cosma and Damian in order to clean the remains of basilica foundations from the wild grass which was taking over the place because of the heavy rains this year. 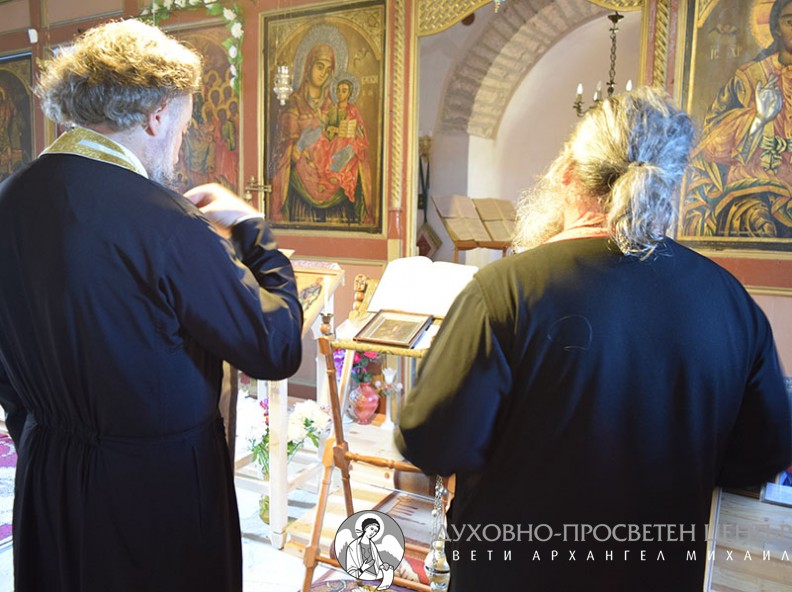 After the akathist to Saint John of Rila there was a free dinner prepared by his wife presbitera (Matushka) Ekaterina and given by father Vasilij to all present borther and sister christians and father Vasilij Shagan give his 1.5 hour speach on the need of spiritual unity between Christians and through all through faith in our Risen Lord Jesus Christ, there was a lot of referrences to Bessarabia and their previous life in Besarabia and a short speeach by father Dimitrij from Bessarabia who as we understand used to be the inspirator for priesthood of both Father Vasilij Salement and Father Vasilij Shagan which in 1992 started their priest carrers as a humble seminary students in Sofia Spiritual Christian Seminary saint John of Rila. 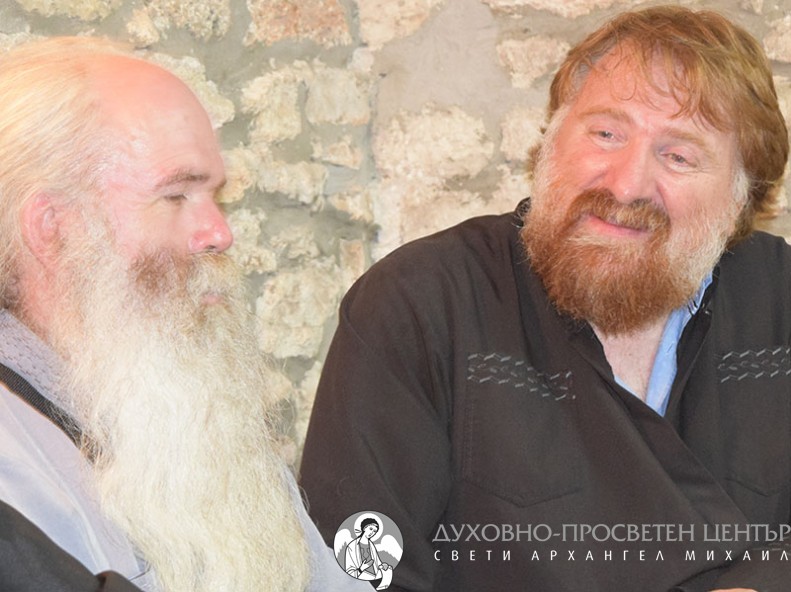 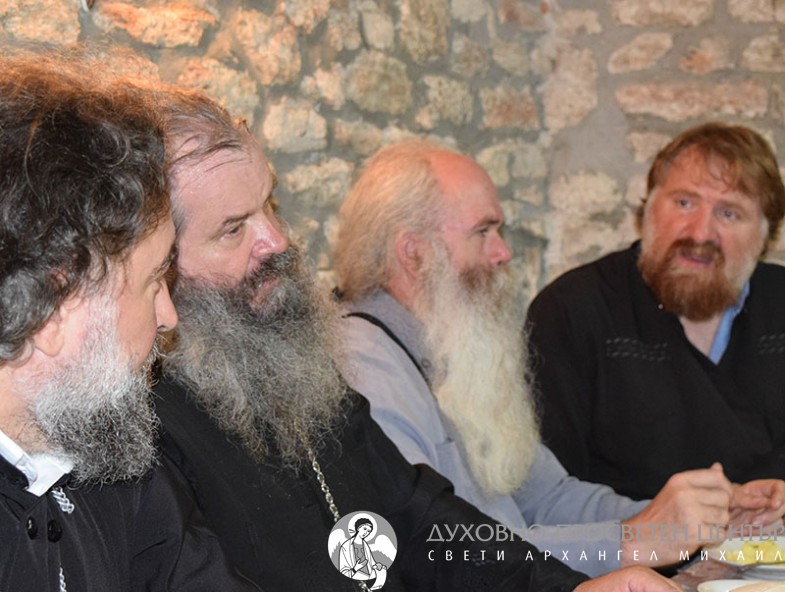 The Fathers Vasilij, Konstantin, Vasilij, Dimitrij during the dinner

It is always a true blessing to meet other Christians as Jesus said and the joy of the shared dinner which consisted of bread, clams, caviar, mashed potatoes  a nice salad of tomatoes, pepper, cucumbers and onion.

After having the shared table and joy to meet new brothers and sisters from Dobrudja region a lot of people had the chance to have long talks with Borislav Avramov (Borko Avramov) who is a key person and lecturer in saint archangel Michael Orthodox Center and Church and a truly famous person among Varna Orthodox Christian Youth. 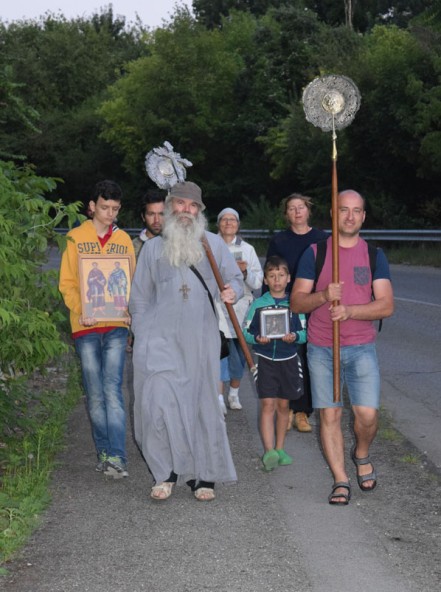 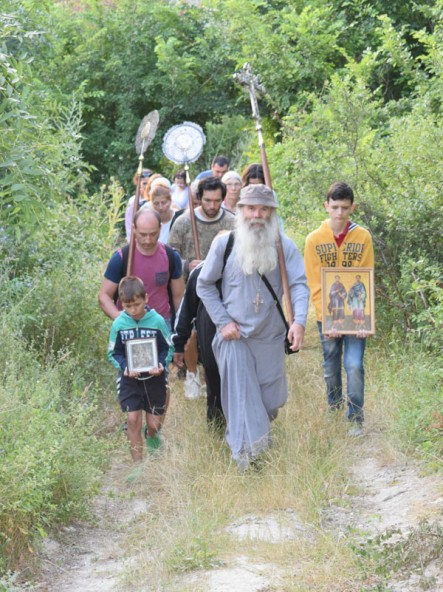 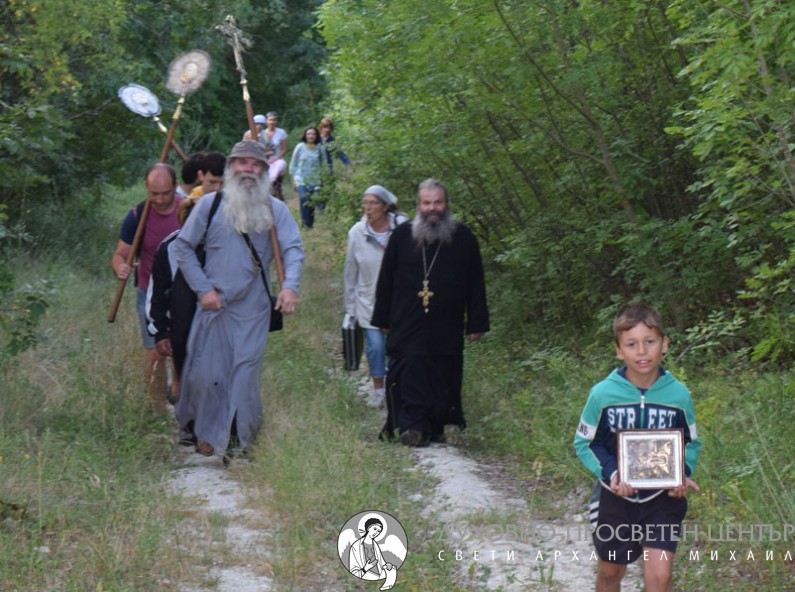 The procession climbing the way to the Roman Basilica 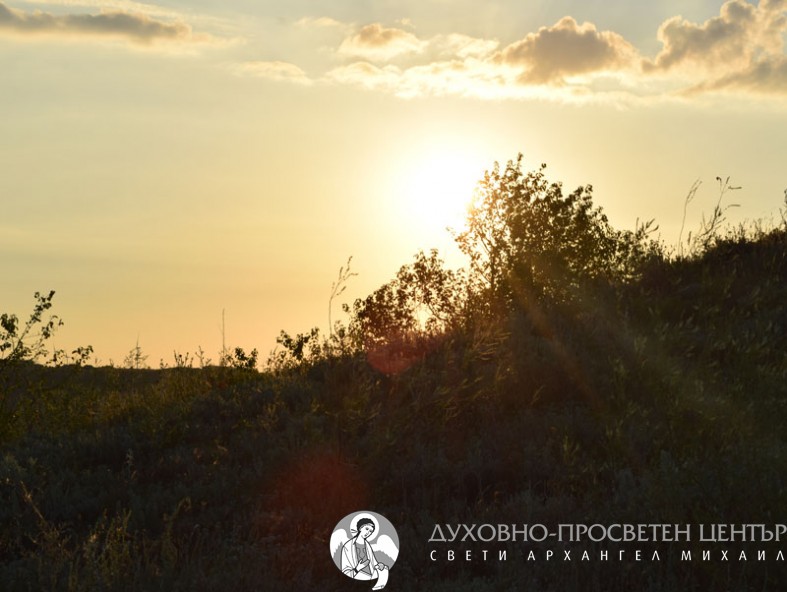 The Sun rising over the Chirakman cape, first sun lights 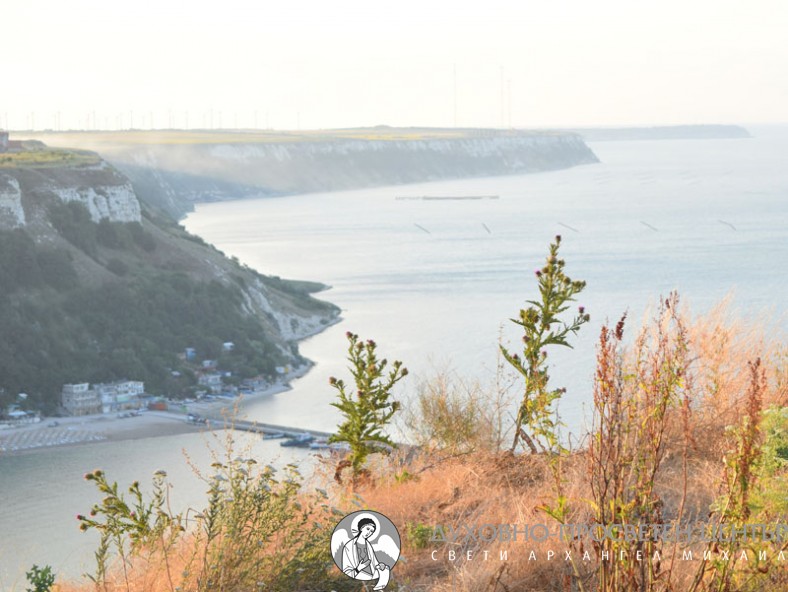 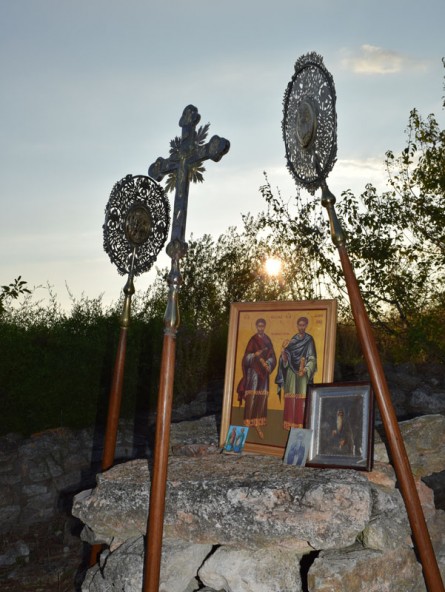 The procession icon of St. Cosma and St. Damianos (right) and St. John of Rila (left) with the Holy Cross and Ripidions 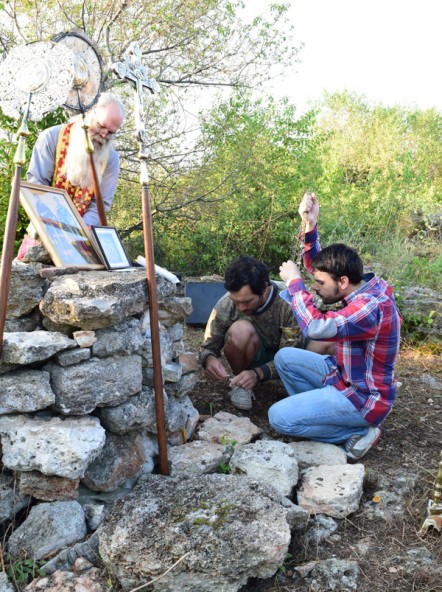 Lighting up charcoal for censor (incsensory) 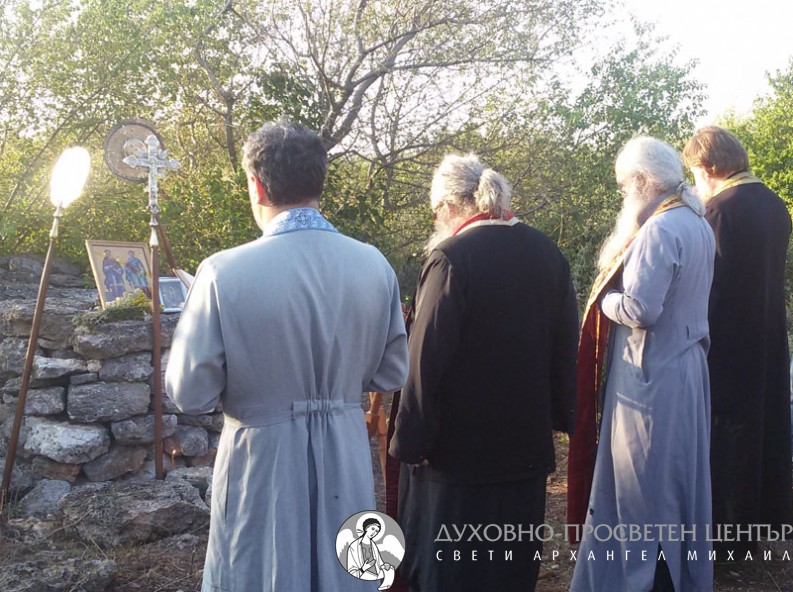 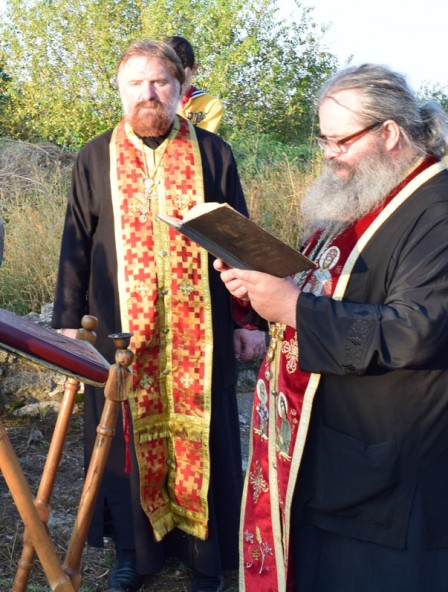 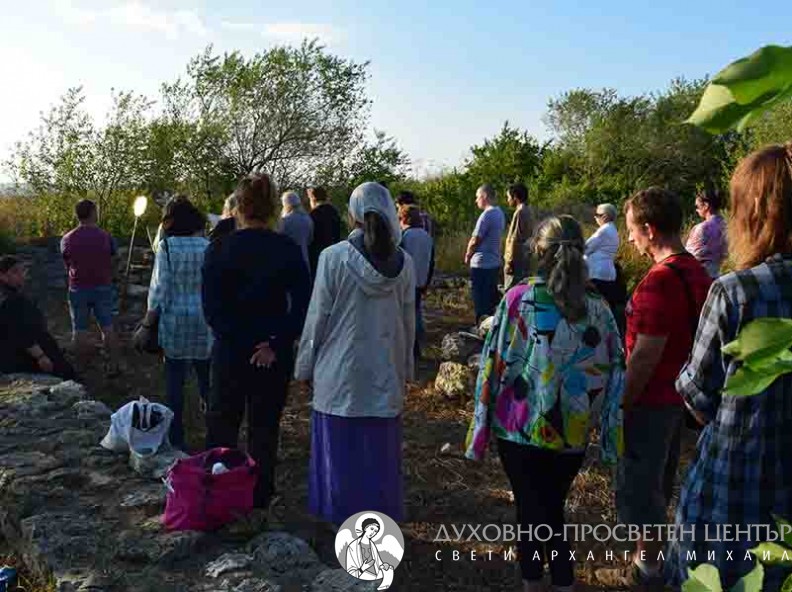 In the morning the procession started from The Dormition of the Virgin Mary Church the youngest were given icons of st. Cosma and Damian and were leading the procession and the rest of Christians were following some of which singing troparions of Saint John of Rila, The Most Holy Trinity, Troparion of saint Cosma and Damian, Trisvetoe (All Holy Thrice) hymn, O Theotokos Virgin (Bogorodice Devo), Dostoino Esty and other Church troparions. 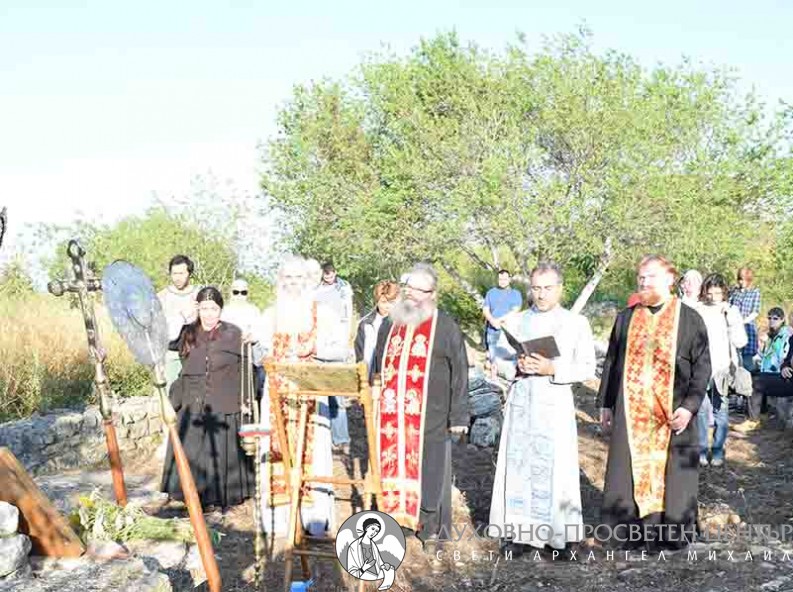 During the Acathist to st. Cosma and Damian

We were pleasently surprised in the morning to find out that the priest from Holy Trinity Church from Dobrich father Veliko and his wife Conka with their 2 kids Mihaela and Andrea came for the akathist prayer to st. Cosma and Damian as well as our beloved brother Stelian and his girlfriend Marinela.

To reach Chirakmana cape the walk is downside about 40 minutes walk through a beautiful wild nature from both the right and left. The road has also a drinkable water for those who got too thirsty, once reaching near the sea there was another 25 minutes walk up to reach  Chirakmana cape peak  6th century ancient Basiiica of saint Cosma and Damian. 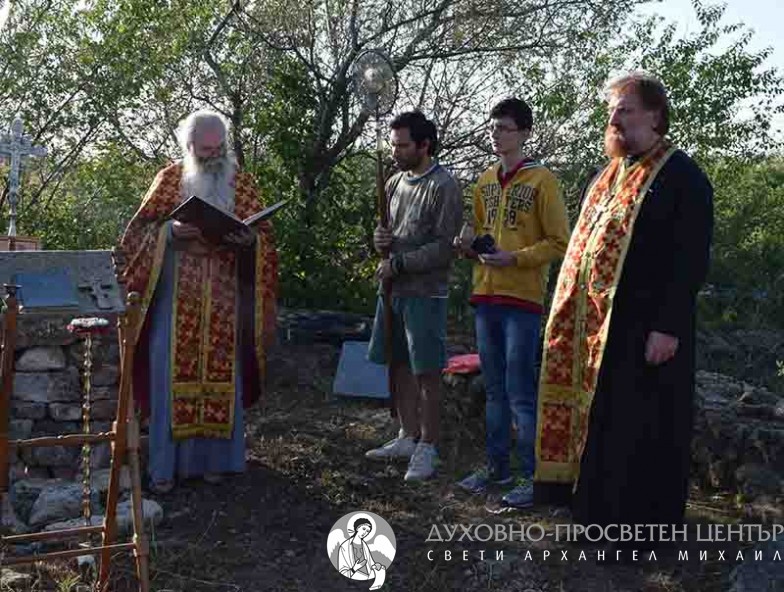 Father Vasilij reading the Gospel after the Acathist 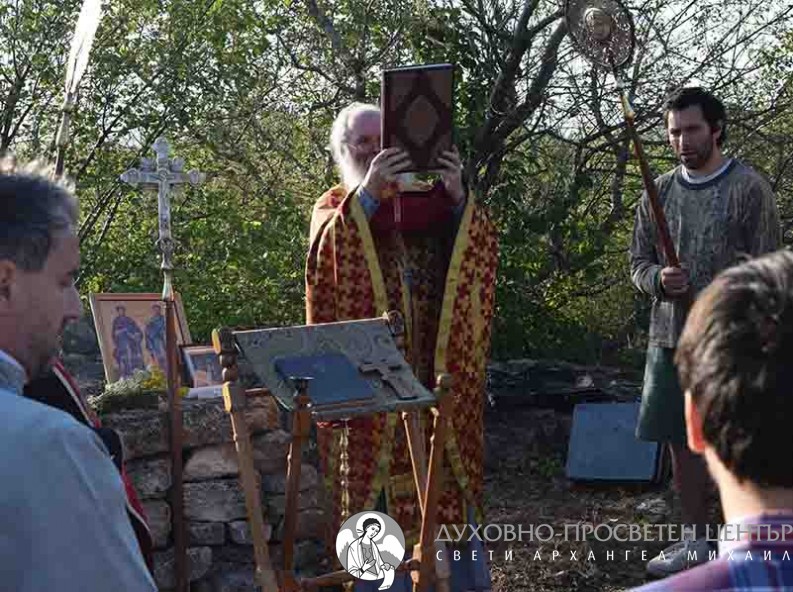 There were also people with cars so for those tired to walk the 40 minutes downside he can get near the seashore by car, I personally was too tired and we travelled with Galin and Andrea and their 3 children. 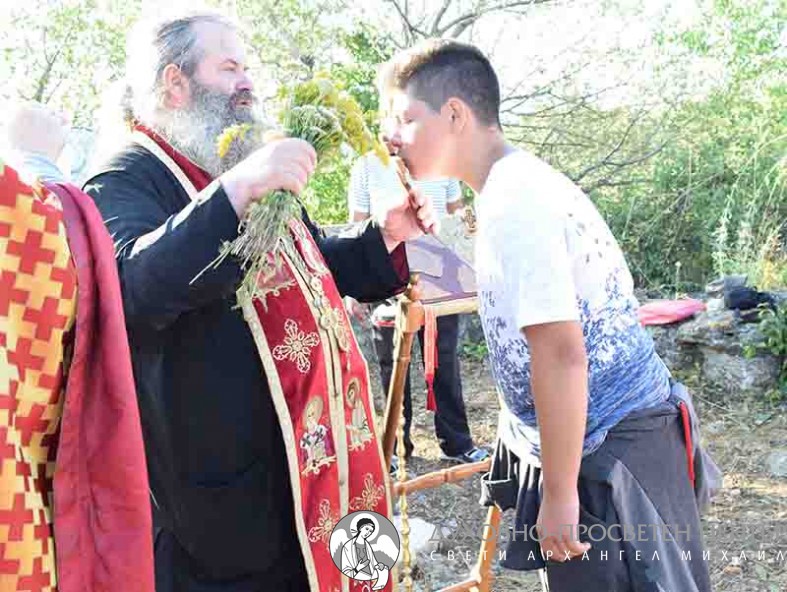 Father archimandrite Konstantin blessing with the sanctified water from the Acathist

This year there was no Holy Liturgy service in open space on the basilica location like they used to serve 4 years ago but fr. Vasilij promised to do his best to make it possible perhaps on next year to have the proper tent installed in order to protect the Antimens and Alter from the wind. 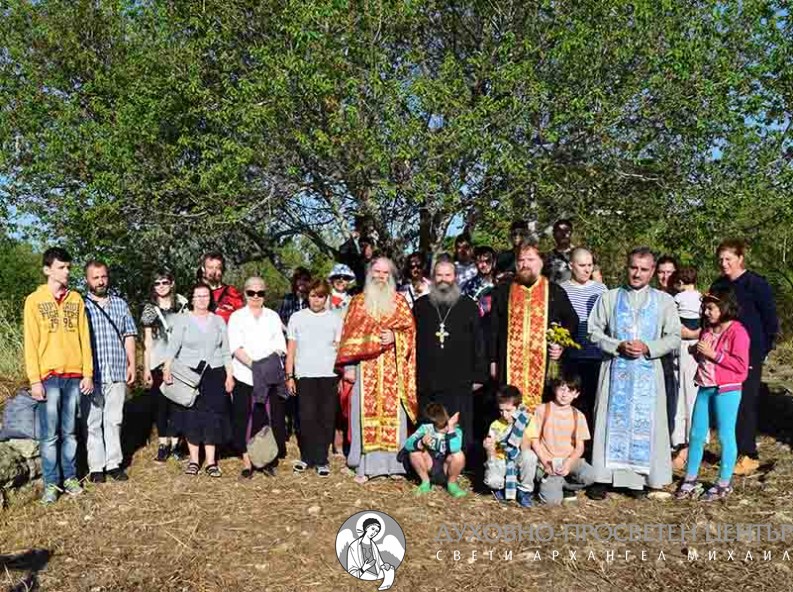 Common picture of everyone after the Acathist

We walked back the road from Chirakmana to near seashore and from their our friend Stelian took me and father Konstantin to drive us to the Church in other occasions I would have walked but since I was so tired from previous day, we travelled to Holy Dormition of Virgin Mary Church with Stelian's car after filling bottles with the mineral water spring situated on the road leading to the Church.

Once all come to the meeting point which was the dinner room we had a wonderful coffee, tea and a quick free breakfast generally given again by fr. Vasilij after which everyone who had a car travelled to Kaliakra Cape which is few kilometers drive way to venerate also the chapel in honour of saint Nicolas the Myrh-Bearer.


The overall experience and spiritual joy was great for everyone I expect the new pious tradition will continue for the next years to come. Everyone who wants is invited to visit and experience the truthfulness of the words of the savior of the Lord Jesus Christ who said:

"For where two or three are gathered together in my name, there am I in the midst of them." – Mathew 18:12

Let by the prayers of Saint Cosma and Damian and the Greastest Bulgarian Reverend desert father Saint John of Rila the All Holy Trinity have mercy on Bulgaria and all Orthodox Christian countires and All people living with faith.