Bulgaria must be out of the European Union! 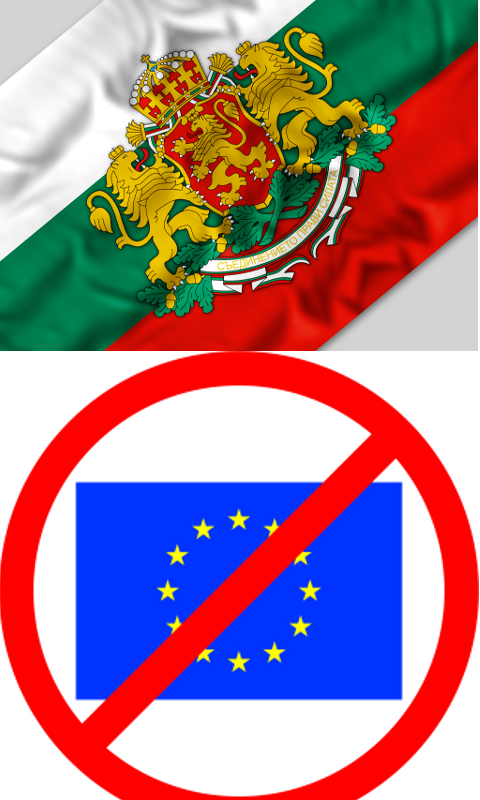 Bulgaria is European Union state member since January 1 2007. I write this words with deep regret. We Bulgarians have already a bitter experience for being in hard conditions, practically the situation in Bulgaria is like this since the complete fall of Communism in 1991. We've been lied to hav better future in the European Union over the last years. 6 Years passed since our acceptance in EU and for this years I can say nothing changed for good in our country. We've seen "how good and bright" future awaits in the European Union over the last years. It is all lies, nothing changed for good for us Bulgarians, not that the communism was different but at least in Communism we had some working economy, now with this EU and all the restrictions (quotas for production), conditions to meet factories to close and reduction of our Atomic energy blocks, we've been totally wasted. If you walk the street you see the desperation and the absurdity of everything in my homeland. It is more than clear, that we need change and the only change can happen if we get out of the European Union. Our politicians made a huge mistake, for lobbying to join the EU. We become another waste country for Western second hand cars – a car graveyard. The old and hard to recycle cars has been pushed to my country. Old computers, low quality food from West, idiotic change of already working systems in the government with dis-functional Computerized ones. This is a very small list of all the shit we got from the EU. Big food store chains expanded there market, we are used for cheap labor and a hot-point for call-centers. We Bulgarians are literally used and abused by Western Civilization. We were bought as white slaves for "candies" and empty promises. If our politicians don't wake up and see Bulgaria is impossible to survive within the abnormal European Union our country is doomed. anyways we should not desparate, there is hope for us. God will help us for we've been tortured for 5 centuries by Turkish, we stopped invasion of Turks to Western Europe historically, we saved the Jews from extermination during Second World War. Bulgarians have always been a honest and good minded people. Now with this technological insanity adopted from the west and all the "going nowhere" of European union we're a miserable victim. Wake up dear Bulgarians, we have nothing in common with the European Union, neither writing, nor language nor our 15 century culture merges with most of EU countries. Even in religious aspect we're different. AThe only way with future for Bulgaria is out of the European Union and join forces with our Russian, Belarusian and other Slavonic brother nations. Rise brothers and sisters and lobby for Bulgaria being out of the European Union!!!!

SAY NO TO EUROPEAN UNION – SAY ES TO BULGARIAN FUTURE !!!!

A Sunday in the Netherlands

I woke up, washed my teeth, did my regular morning excersises then Ina came my room and we went out shopping. In Sunday all shopsare closed in the netherlands thus the near food store we usually shop from Alberheim is closed too. That’s why we moved to the center.We first ate in a place called “Subway”, the vegetarenian sort of hamburger costed 2 EU, then we walked through the shops in the center andresearched where is what and how the prices vary in the different stores. Ina bought sunglasses, a blouse and ear-rings. We were also happyto find 24 hours opened shop right in the center. It seems that usually in Sunday the only place where the shops are opened is the center.We took some beer and went and stood along a little lake enjoying the swan and the ducks and crows which moved and flewer aroud. Then we catched the way for home looking around for unlocked bikes which we may take (it’s common here in the Netherlands to just take unlocked bikes and make them yours even I heard a lot of people leave the old unusused bikes on the street unlocked so you can just take it and use it.On our way home Ina saw left old Zanussi fridge next to a trash bin with a note on it saying something in Dutch containing the Dutch word “wekrt” which literally translated means works. So we hoped the fridge is a working one. We called Koko and Sali to come end help us with the fridge. Then Koko and Sali came and helped us move the fridge to the Honigkamp 2 which is the building of the dormitory I live in. LaterI collected the dry laundry and went to take a shower, then I moved to the 5th floor’s kitchen (My room is in the 1st floor). Wherewe gather with Ina for breakfasts, lunch or dinner. It’s a common thing the last few days that all the Bulgarians that we live in Honigkamp just gather together with the laptops and listen to a different kinds of music and talking about stuff. Although is’s so nice in the Netherlands I’m homesick a little. I also feel like going in no concrete direction. It’s a common thing temptations come that tempt me to smoke again. Also a really terrible temptation I face is a one I faced a dozen of times. You know there are some girls that really are my type of girls unfortunately every time I look at that girls I start falling in love. This is just fine the bad thing is that I’m usually too “different”, unconventional etc. to fit nice with the girls I like. Day by day I search for truths and I’m not sure I’m able to reach them .. the poor man I’m ehh…END—–