On 6th of January in our Bulgarian Orthodox Church just like in the most Christian realm, we celebrate the great feast of Theophany / Epiphany (Baptizm of our Saviour Jesus Christ in Jordan).

What exactly we celebrate is the Baptizm of our Saviour Jesus Christ in Jordan by st. John the Baptist (John the Forerunner as we call him in the church). This day is very important for us as Christians and this is why the holy fathers in the church has ordered this feast to be among the 12 most important feasts in our Church, the so called (Lords feasts).

On Theophany's day it is a rule in orthodox Church that the Great Blessing of Water is performed. The Blessing of the water and the preceding holy water from the priests blessing is taken by Church layman and we bring a little of this water to our homes to bless through that our homes.

In our Church belief the Holy Water from the Theophany feast is considered the most powerful in spiritual sense holy water as this water is the same water with which our sinless Saviour and lamb (Son) of God Jesus Christ was baptized in Jordan.

The reason why we call the feast Theophany is because God in his essence of Holy Trinity appeared clearly to mankind for a first time in Human history. Our Holy Trinity (3 essence God in one indistructable and insaparatable God – one God as God said for himself in the beginning of writtings) has revealed himself in front of all the people gathered along John the Baptist in Jordan waiting to be baptized in his three essences:

1. God the Father spoke from heaven manifesting and testifying about Jesus Christ being his beloved and only son and saviour of mankdin
,br />2. God the Son (Jesus Christ), has physically appeared to receive the baptizm to fulfill all righteousness and (the old testemential prophecies) and to begin his 3 years mission on earth.

3. God Holy Spirit) has descended from heaven on Jesus Christ in a publicly observable form of a dove

Theophany's feast is called by some english speaking orthodox christians Epiphany, but this is a term less used in orthodox christendom and much more spread in Roman Catholic one.

The Gospel readings in the church tell of the Lord's baptism by John in the Jordan River. The epistle reading of the Divine Liturgy tells of the consequences of the Lord's appearing which is the divine epiphany.

After the end of the st. Basil the Great Holy Liturgy served, the Great Blessing of Water is performed by one or more priests (depending on the number of present priests). The meaning of the blessing of the waters meaning is to show that mankind and all of God's creation, were created to be blessed and filled with the sanctifying of God's presence.

A very local unique bulgarian tradition on this number is that if the great blessings of water is performed by a priest near a river or a sea shore the cross be thrown in the water in order to bless the waters. 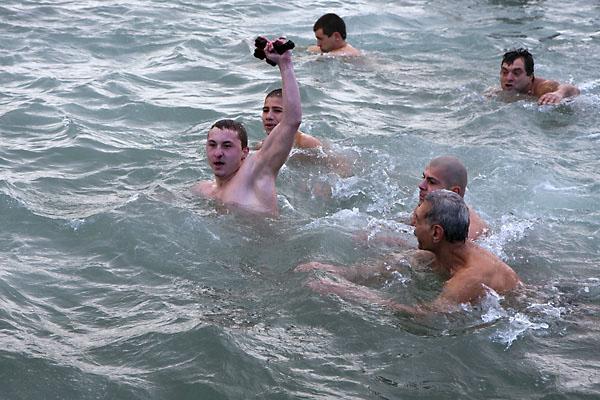 Then a number of brave man jump in and do a race swimming aiming to pull out the crucifixion of the water. It is believed that the one who could pull out the cross will get God's great blessings through the upcoming church year. 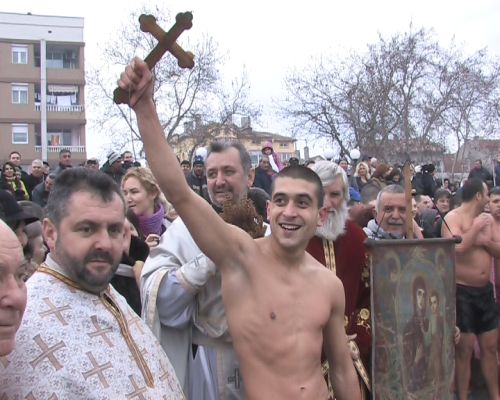 Let us pray trust and hope on God to also appear to us who seek him, and show us his Holy Trinity wholeness mercies just like he did himself to the people waiting for Baptizm from John the Baptist by the holy prayes of the Theotokos and his holy saints and all heavinly hosts. Amen