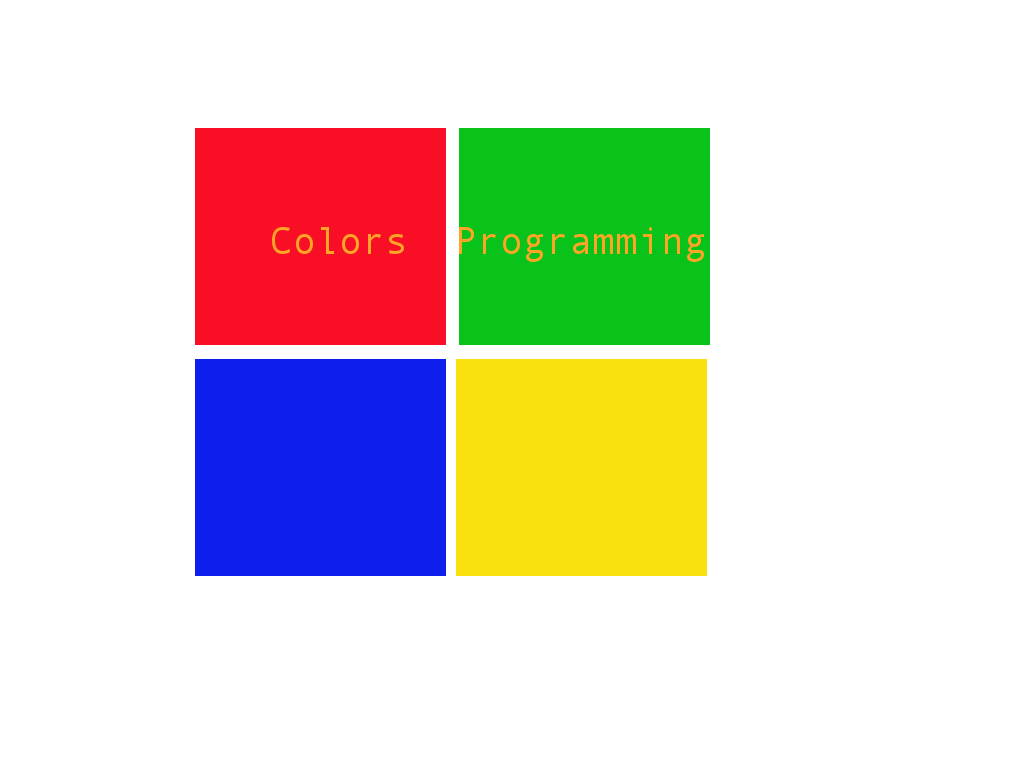 As I've pointed earlier there is plenty of "secretly" kept and less known by public research on how colors influence us daily. The biggest companies are heavily taking advantage of what is found and known for colors impact on our minds (psyche). Actually there is a whole branch in psychology which deals with impact of colors perception on us.Besides companies, many modern governments are well aware of the many facts on how citizens percept colors and use this in color 'installment' in government offices and government institutions.

There is no universal knowledge on how colors completely affect us as every human on earth is very unique and saying this or that color has this or that impact on indivirual or group is not 100% accurate. However there are general traits nowdays formed especially with globalization and unification of TV ads and big companies corporate image, a unification started on how different nationality people perceive colors.

Nowdays in developed countries there are more and more people who perceive certain colors in similar fashion. Therefore every serious top marketer should carefully study colors and their relation with ancient time people believes and understanding on what each of the 'rainbow' colors symbolize. Most likely because there is no completely unified understanding of colors between various individuals may companies like Google and Microsoft started using all the rainbow colors in their basic company logos and branding for more on this topic please check my previous blog post Color trick Microsoft and Google use to keep their users loyal

Another large industry area, where color programming is very heavy is Computer and Video Games. You certainly still remember large portions of the games like Sega’s Sonic the HendgeHog or Mario Super Bros. or even the old arcade machines with games like Punisher or Cadillacs and Dinosaurs, Street Fighter etc.
All this old arcade games have a big portion of Color programming embedded in and this is one of the main reasons we remember them for a long time and playing them evoked such a strong feelings in youth.

This trend of using colors to make up our minds is being observed for many other physical goods as well as is starting to get more and more heavy adoption by websites branding on the internet.
Actually those with most succesful businesses on the internet have already integrated some kind of color programming scheme. An example for this would be the Internet top domain names seller GoDaddy. The have adopted a green scheme as a primary color combined with some other ones to create in the customer a feeling of ecology, naturality, peace and solitude.

The study of color programming is one major field to be known by anyone truly willing to understand why certain big store chainslike Carrefour, Lidl, Billa, MediaMarkt – in western europe or TechnoMarket, TechnoPolis (MediaMarkt copied tech equipment by shops here in Bulgaria) are decorated inside the way they are. I personally didn't like the concept of color programming since from Spiritual point of view it is a big evil. Trying to manipulate people perception to do something you would like to in general is very evil from spiritual point of view. A mixture of rainbow colors in a natural environment for example flowers in the wood or wild mountain place is one thing, but making it artificial and placing it in certain pre-desired order is totally another. Besides that the colors in the natural environment are natural and therefore the impact on us even if colorful is very much better than if it is done with a certain intention like in the big supermarkets stores, fast just food companies – McDonalds, Burger King etc.

The research on color mind influcence – Color mind programming is a controversial science. Nowdays many big businesses however use this as a granted science, even whole business sects with some mambo-jambo believes universities, children garden and schools in modern countries have employed the use of some type of color programming aiming to influence their pupils, students (organizational members – you call it).
Color mind programming and heavy use on advertisements on the TV, the Internet, Stores and mostly everywhere are however starting to took their tolls. The high increase in mental problems and dumbness in developed and some undeveloped countries as well as the increased number of people who go insane because of too much color programming is reality. The believe that mental programming is one of the ultimate tools to influence somebody and push him to do things you want like consome more of a product or generally consume (buy) more goods creates another severe issue it makes people to constantly over-consume (eat more than the body needs) and this increases the number of over-consumption evoked diseases …

But color programming doesn't stop with just the material (physical) surrounding world it is a concept highly employed in online based marketing. Online business is seen on so many top used websites, social networks like take for instance (facebook). It is so spread that even the software primary vendors like Microsoft, search engines Google Inc. have already heavily employed the color programming as a basis of their products.

There is another reason why most vendors nowdays issue their physical or 'virtual' products so colorful using all the colors of the rainbow. The reason is the fact that as a kids through animation, cartoons, toys and surrounding environment we have been exposed already even from our very youth age to a kind of color programming through kids toys we've been given by our parents). Hence the young years color programming became a basis for a future time color programming. The colorfulness of our kids years are already sub-consciously stored in our minds, so almost naturally there is a feeling of joy to pop-up once we see something childishly colorful.

What is wrong with todays Economy

This question is a serious question imposed at this harsh crisis times. How and why did we ended in an downward spiral economy?
There are many problems which has landed us to where we are. Anyhow there few major ones which played key role.
One is the wrong mindset of CEOs that money is the only motivator for a human behavior. Even though money can be a key motivator it is just one of many factors which motivate company employees to be efficient money is not a heal-all company problems medicine.

According to latest psychological researches conducted by Human Resource Managers. What really motivates people to do what they do full heartedly is not solely money. Social contacts at work place, the level of boredom (or the absence of it), as well as the repetitiveness of tasks, and the freedom given to the individual are key motivation factors.

Nevertheless the many other factors influencing an employee's job prudictivity, money motivation continues to be a factor with a severe weight factor.

The perception held by so many company top managers the amount of money owned and the good possessing are key factors for economy growth or company development is actually an old idea which doesn't reflect todays business reality.

We have seen in the last 30 years many companies like Microsoft and Apple, who started as tiny garage companies and in a short time converted to big corporations employing thousands.

What made this companies succesful ? Was it the money? In our view Obviously NO. Multinational companies like Google and Apple Inc started with a little money capital, but a strong belief that what they do will change the world. What happened we have seen their belief to change the world came true.
In a similar way we at Cadia started with a strong core belief that Offshore Solutions are the future of payments. By pushing the offshore solutions to develop further we believe we will fulfil our mission and change the world just like so many before us did.
Why would one prefer offshore instead of a normal banks? There are two main reasons, one is the plus that your money is not tracked by a banking system and hence fresh money are entering the economy, second is the anonimity it offers.

One of our key values at Cadia is to Respect ours and our customer freedom of privacy.

Its obvious that the business is failing because the shortage of company productivity, caused by the top management idea that its mainly the profit that makes a company a success.

Therefore as long as companies fail to "practice what they preach" e.g. keep to their Values and Company Mission, the situation with our economy will get surely worser. Even though efficiency is increased by the many technological innovations and possibly can be increased by increased money capital, the humans efficiency is falling because the lack of interest in company personal in their daily work.

What this actually means in practice? It means simply employees are not enumareted respectively to their work, companies are trying to cheat between each other puruing the ultimate profit without taking in consideration any established moral or religious norms and a lot more of "wrong" corporal activities which usually lies on the back.

Managers nowdays are ready to "kill and rape" for the good of their sallary rise or the company good, not considering if the effect of a certain company activity will have a long term bad infuence on society or the environment neither if the future consequence collectively will be devastating for humanity.

People on lower positions in companies are looking into managers unlawful activities and after a while, lower position employees start adopting unethical methodologies. Hence suddenly the unethical behaviour of the top management spreads like a virus to the lower levels down to the most low positioned company employees.

The world today is mostly governed by the rich and educated. To be rich anyhow as pointed in Maslows hierarcy of needs (Pyramid) the individual needs to have a Physiological needs & Safety – Food, Shelter, basic financial stability existent.

Governments on the other handy are currenty tolerating non society concerned unethical companies, often even (anti-human) companies. By their tolerance our governments are increasing their dependency on multi national capital growing corporations. The result is a big mess, which becomes almost impossible to fix in time.

The poverty shadow which is falling on so many people today is also a factor changing the usual people mindset. Having the mind to survice in these hard days, a lot of individuals behaviour starts to change and tolerate anything without any examination if it serves a good or bad society purpose. Deception and lies are started to get perceived in humans mind as somethng natural and allowed, hence nobody cares about pursuing high ethical and moral values on individiual level.
The lack of responsibility for humanity on individual level forces governments to do a number of restrictions and police regulations to reduce the unlawfulness and deception between individuals. Increasing the restrictions doesn't change too much because on a peer person to person level the relations iniquity continues to raise.

Among the list of restrictions implied by governments to reduce money frauds is the attempt to close all companies in the Offshore Business providing anonymous money transfers. Anyhow would closing offshores and making all banking operations transperent solve or reduce economic problems? Positively no, it seems like this might help from one side another perspective however reveals that closing all offshore bank accounts would just make the Free Market non free anymore. It will make all payments tracked and carefully put into the ultimate balance sheet… ~