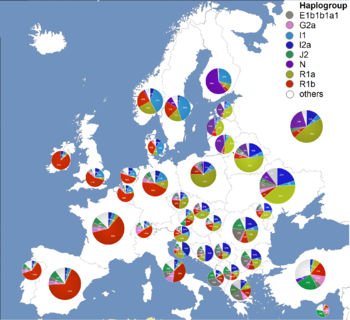 As I've said earlier in my blog posts, I keep deep interest into the origin of things. Thus I'm quite interested into the origin of Bulgarian nation and rest of European nations. I've stumbled across a project called IGENEA which aims at researching into DNA of nations and determining to what kind of ancestry nation is most likely to be. The data provided by IGENEA is put into question by a lot of Historians for the reason the method of IGENEA is based merely on scientific logic and scientifical data which can't be 100% proven and there is also hypothesis as part of it. One other thing is IGENEA project has commercial side, as they offer DNA tests that can be done at home and later analyzed in iGENEA laboratory and tell you individually who are your most likely ancestors and where you're most likely to find your relatives. Igenea claism they can tell you if your DNA somehow links to famous people like Napoleon Bonapart, Michael Jackson, Nicole Kidman or even the Popoe 😉

Though of course as everything in this life the results one gets from igenea are finally based on faith, as mostly all in life is based on faith.

Though below video data might be incorrect, some general data provided for some Northern Europe nations looks trustworthy. For those interested to know exactly how IGENEA testing and analysis is done check here
As I'm a Christian and I firmly believe God Created all I support the Creationism theory, I look in the data a bit sceptical for the reason many of the results and conclusions driven from IGENEA project lay on believes in Darwin's theory credibility. Everyone who seriously considered to know where we come from has already questioned the credibility of Evolution. Anyone who digged deep already knows there are a lot of problems with Darwin's theory which are unsolvable by modern archeology 'little' species findings. Also it is big problem with the idea that man came from Africa, that credibiliy of such claims is and will probably forever stay one big Hypothesis.
Enjoy, the highly specular findings of IGENEA in below video

Who were our ancestors- Genetic history of Europe – DNA – Truth or Machination from IGENEA.