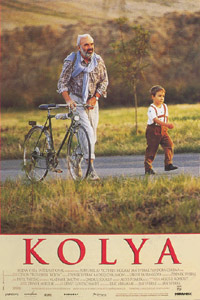 Kolya is the first Czech movie, I see. The movie is really good and I would classify it as a really art movie.
It also bears the sad melancholic atmosphere that we hold on the Balkans. The movie might be a hard to grasp one for Western people but would definitely be easily understand by someone who lived in the realms of the USSR.
The movie is also a movie that presents realities of the decaying communism, the times before the year of the fall the Berlin Wall (1989).
What was really worthy and edifying for myself was the sad realities of a falling Union (a false idealistic empire built for more than half a century).

The movie starts with the main actor Louka, a middle-aged Czech man dedicated to music (a cellist funeral crematorium orchestra player and a self-employed cello instructor).
Louka has one major muse which helps him follow his music career, the pursuit of new love and sexual relations with woman.
As the situation with falling-communism is harsh and the economic in the Soviet Union is in downturn this kind of trend is even more seriously felt among people who are in art like Louka.
Most of the movie is happening in Golden Prague (One of the most beautiful cities in the world IMHO).

Louka is working a couple of part time jobs next to his music career in the orchestra in order to be able to pay his daily life and bills, one of his other ways to get extra cash is the gravestone inscriptions.

Even though Louka is trying hard to earn money to pay back his loans and get a normal living, he is unsuccessful in getting enough money to make a decent living.
Suddenly he gets into huge debts which he is not able to pay with his earned money. As Louka is single he is offered by one of his debtors to earn money by a small cheat (a false marriage) with a Russian woman who needs Czech citizenship in order to be able to later travel freely to the western part of Europe.
He is offered 30 000 of Czech crons which for that time is a really solid money, which will allow him to pay back his loans and even get a small car Trabant !

Even though Louka tries his best to resist the temptation to do the criminal marriage at certain point the offered money convince him to accept the offering and he merries the young Russian fictiously.
As marriages of this type are quite common in Czech in this days of communism decay, he lives with the promise by the Russian woman family that they will get divorced after 6 months time.

Louka gets married and gets his money, but just a 2 weeks later the Russian young lady emigrates in Germany to her German lover and leaves her young Russian boy Kolya behind under the care of her old mother.
The old mother being unable to accept the sudden escape of her young Russian daughter, gets insane and enters into a mental hospital.
Since Kolya (who speaks only Russian and has not even basic knowledge of Czech) does not a family to be placed in he is being brought to the apartment of his (father in law) Louka.

Louka enters into an unexpected hardships, where the policy could chase him for the illeagal fictious marriage and even worser with a foreign Russian child.
He has never before had any experience with children, so initially he faces the hell of taking care for a child.
To make things even worser the babushka (mentally unstable grandmother) of Kolya passes away after a heart attack in the Mental hospital.
Now Louka is the only “relative” who according to Czech law has to take care for the 5 year old kid Kolya !
The child suffers from suspected meningitis and has to be placed on a course of carefully monitored antibiotics. Louka is threatened with imprisonment for his suspect marriage …

The movie is a serious drama but is a really touching one as it presents the power of love and how love can change human lives as Louka’s gradual love for Kolya changes him for good.
Kolya is a wonderful piece of art movie and a real achievement for Czech cinema. Since it’s the first Czech movie I see I want to see a lot of more.
In the mean time just watch the movie as it’s a wonderful piece of all-time movie classic.

The Driving Polygon – My adventures of learning to drive a car

Today the day was pretty normal for which of course I have to thank to Our Awesome God :)I didn’t have much work, I stand up somewhere around 11 o’clock. I did my usual morning exercises.By the way since I started practising everyday exercise I feel physically better. After that I prayed a bit.Afterwards I red the road regulations and laws book (as I mentioned in my previous bloggings I have starteda driving license courses). Somewhere around 12:30 Gery did called and asked me if I’m willing to go outfor a coffee. I accepted and we saw each other infront of the fountain. Because all the tables outside wasoccupied we and in the coffee itself was too hot we decided to move to the Kukla coffee. We coffeed a bittalked about stuff shared how our lifes are going etc. etc. After that I had to go to the college becauseI need a copy of my school completion diploma because my driver lessons teacher requires as well as therest of the documents my ID card, a picture etcetera, etcetera. In the college I met Todor Dyankov who wasteaching me at Statistics and in Marketing II at the college and Ertan also Nina the librarian, I have tosay all of them are pretty cool :). Ertan showed me what he has made using Adobe’s flex product andexplained how convinient it’s usage is for creation of books and various other web based sort of manuals.Later at home I red more some chapters of the road regulations book. After which in 18:45 I went to the stomatology(this is the usual place where driving teachers park their cars and where we met with my instructor), he askedif it’s possible to change the driving lesson to be in Tuesday for 18:30 to be honest I haven’t had much choice since theteacher had some urgent job to do. Right after that I went to my mother and father grocery shop because previously wehad a stipulation that I my father and a close family friend (Georgi a namesake) would go somewhere out of the city becausethe 32 hours for which it suppoed that I had to be ready for the exam were far from enough for me to become a proficient driver.Eventually we went with my father’s car (Opel Astra) to a place which was before used as a Driving Polygon and is a perfectplace for a novice driver like me. The most hard thing for me in governing the car was starting the car from first speed usingthe clutch pedal simultaneously with the “gas” pedal. With some practice there I can say I got better at starting the car on 1st speedalthough still it’s pretty hard for me to move the car on 1st speed from stopped position when the car is on a small hill.After that we went out of the polygon and I drive on the road of Bogdanovo village. Right after we went back to the city.I went to see Bino because I have promised him to go out for a walk together. We had a nice walk in the city park, I came backhome I went to see my grandma just like I often do lately I stood there for 20 minutes and went home, ate and here I’m now blogging :)END—–