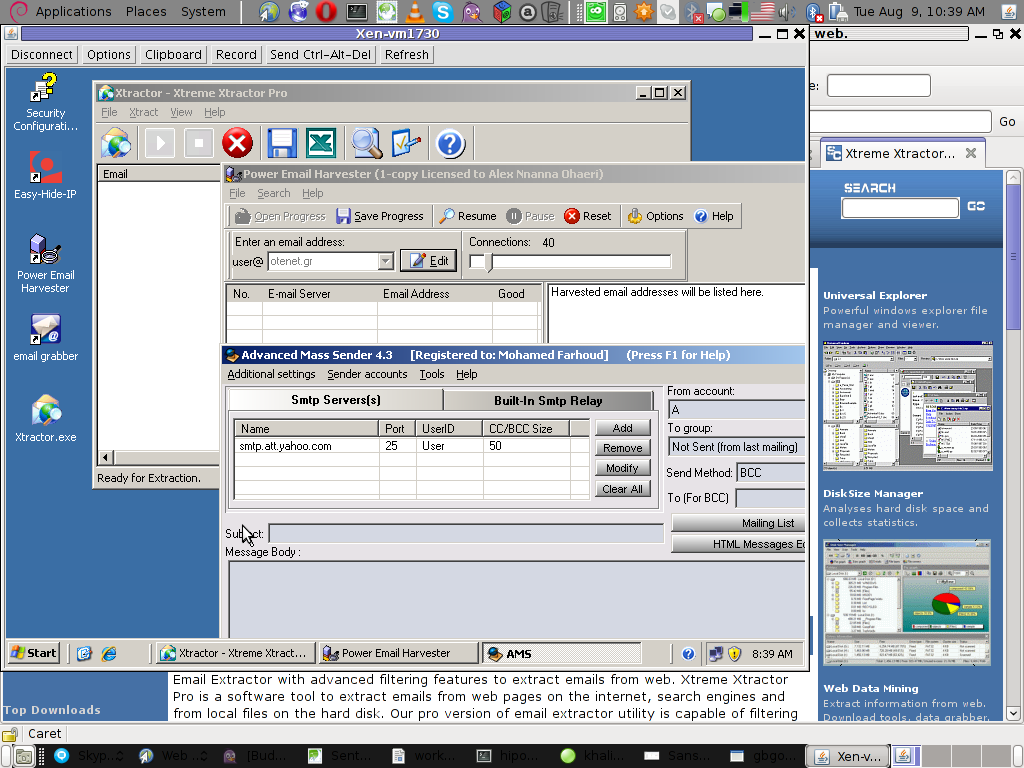 Few days ago, I’ve catch some Spammers on some of the servers running Windows inside Virtual Private Servers.

I was doubting if I want to write an article to mention about this 3 piece of software as it might be a bit boury however eventually I thought the goods of it will be better so I just took minutes and wrote it.

Back to the topic the three programs which the spammer was installed and prepare to do his spamming job on the VPS server was:
1. Xtractor Extreme

In order to hide his real IP address and prevent the IP he was spamming, he has also installed some anonyous proxy like Windows software called Hide My IP

The first program Xtractor is basicly an Email collector, the program crawls the net and searches to match email string on web pages.
It get target websites from major search engines.
You put an email like @gmail.com inside it and it starts spidering and grabs all email strings under the domain @gmail.com. Besides that Xtractor Extreme Pro is freeware and can be easily downloaded from many locations online.

Power Email Harvester‘s program name is also quite self-explanatory, what it does is it digs the net for email addresses and generates spam lists … This is the ultimate tool for a spammer, however the guys who create this piece of disruptive software has branded it as “a marketing tool” and even sold and advertised as a tool to help an e-marketing campaign.
This is of course just a word play and in fact in my viewe these program should be prohibited by international law.

Advanced Mass Sender is another piece of Spammer software which officially is tagged as marketing software and is sold and recommended as an useful tool for e-marketing.

I’ve take the time to take a quick and test the spammer installed AMS , honestly I’ve been amazed how far spamming has went during the last 5 years.

This AMS shit is capable of creating a target groups which could easily be spammed whether each group can contain up to 200000+ ! target emails
Advanced Mass Sender can even check if a certain email is present on the remote mail server and only then tries to deliver.
Besides that it even supports sending the spam mails via multiple mail servers (simultaneously) to increase the thoroughput as well as supports proxy servers…

I decided to write this few lines article to raise some awareness about this shitty sofware in a hope that somebody who is Administrating / Supporting client owned Windows servers or Virtual Private Servers will be able to read about this 3 ones and stop spammers before they succeed to create mail havoc with their ugly spam stuff.