How to configure haproxy logging to separate file on Redhat Enterprise Linux 8.5 Ootpa

Configuring proper logging for haproxy is always a pain in the ass in Linux, because of rsyslogd various config syntax among versions, because of bugs in OS etc.
Today we have been given 2 Redhat 8.5 Linux servers where we had a task to start configuring haproxies, to have an idea on what is going on of course we had to enable proper haproxy logging in separate log file under separate local, for the test one can use haproxy's

config, this is a general way to configure logging which I've described earlier in the article How to enable haproxy logging to a separate log /var/log/haproxy.log / prevent duplicate messages to appear in /var/log/messages
However this time I wanted to not use /dev/log as this device is also used by systemd / journald and theoretically could be used by other services and there might be multiple services logging to the same places possibly leading to some issue, thus I wanted to send and process the haproxy messages directly from rsyslog on RHEL 8.5.

Create a custom file that is loaded with the rest of configuration from /etc/rsyslog.conf with a line like:

In /etc/haproxy/haproxy.cfg under global section to print in verbose mode messages (i.e. check, the haproxy is receiving properly sent traffic) do configure something like:


Eventually you might want to remove the debug word out of the config, if you don't want to log too much verbosily once everything is properly tested and configured

I juset setup a VMWare Virtual Machine on my HP notebook and installed Debian 7.0 stable Wheezy. Though VMWare identified my Office Internet and configured automatically NAT, I couldn't access the internet from a browser until I remembered all HP traffic is going through a default set browser proxy.
After setting a proxy to Iceweasel, Internet pages started opening normally, however as every kind of traffic was also accessible via HP's proxy, package management with apt-get (apt-get update, apt-get install etc. were failing with errors):

This error is caused because apt-get is trying to directly access above http URLs and because port 80 is filtered out from HP Office, it fails in order to make it working I had to configure apt-get to use Proxy host – here is how:

a) Create /etc/apt/apt.conf.d/02proxy file (if not already existing)
and place inside:

That's all now apt-get will tunnel all traffic via HTTP and FTP proxy host web-proxy.cce.hp.com and apt-get works again.

Talking about Proxyfing Linux's apt-get, its possible to also set proxy shell variables, which are red and understood by many console programs like Console browsers lynx, links, elinks  as well as wget and curl commands, e.g.:

To make this Linux proxy settings system wide on Debian / Ubuntu there is the /etc/environment file add to it:

And go to Network -> Network Proxy 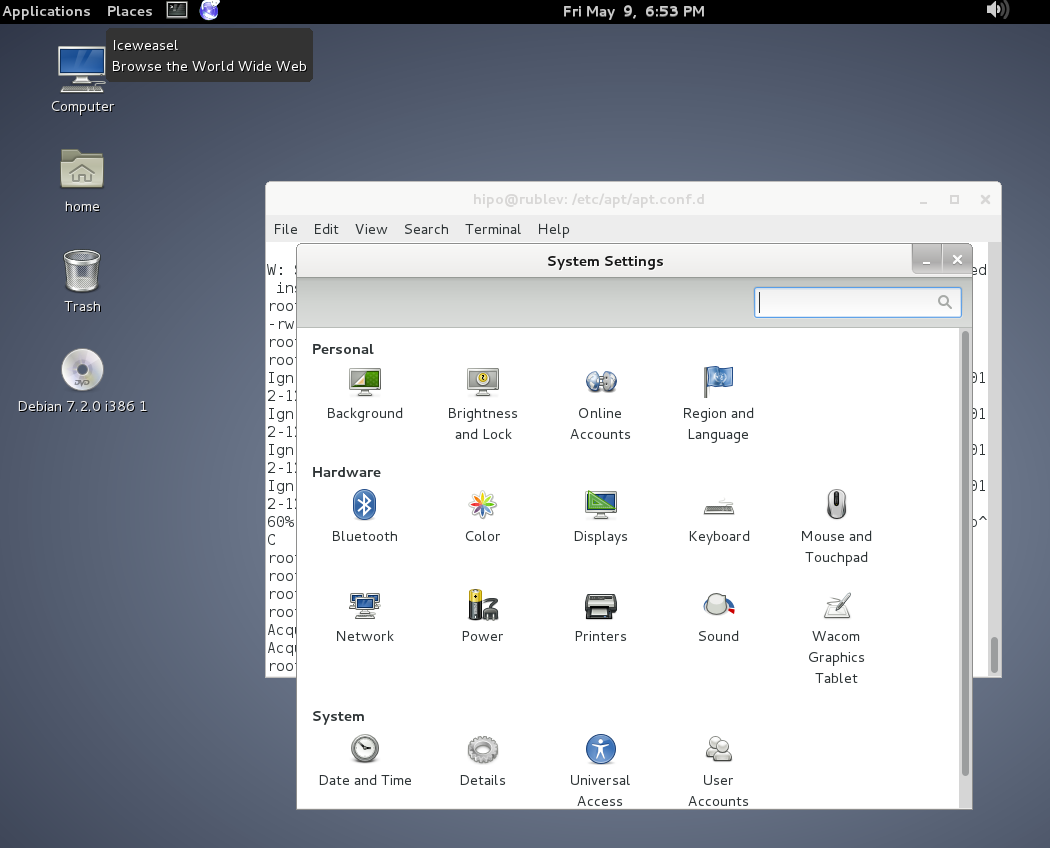 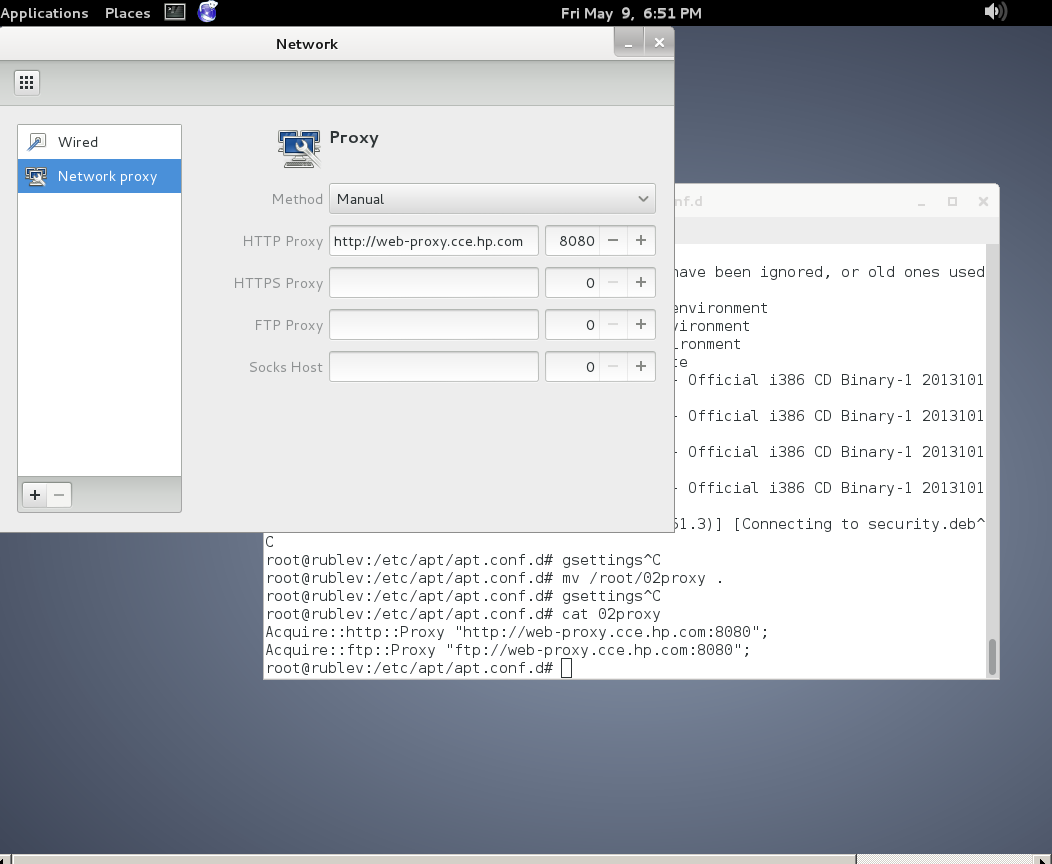 How to change local hostname name on GNU / Linux

Often when some of my companies, I’m employed with rents dedicated GNU / Linux servers co-located in data centers,
usually the local hostname is configured while the system is being installed, therefore many times when we forget to tell the Dedicated provider what kind of hostname, we’re intending to use they came up with some kind of hostname which is randomly set based on the dedicated provider’s company name or a server ID number. Cosenquently the machine hostname assigned due to company local server numbering policy.

Hence after one logs in to the newly purchased server with over SSH protocol, then we end up with a hostname like for example:

This hostname naming, often doesn’t make much sense for the services running on the server and doesn’t have nothing to do to the provided internet services by the server, however its really important for me to orientate myself which server I have logged to. Therefore one of the first things I do while configuring a new server is to change the local server assigned hostname .

Besides having the hostname shown by the shell prompt, there is a quick command to print out the Fully Qualified Domain hostname, by issuing:

The Universal GNU / Linux way which works on almost all Linux distributions to change the configured hostname goes like this:

On the second line which assigns the hostname for the loopback IP address 127.0.0.1 , you see the identifier for the local hostname:

To change that to a custom local hostname of choice, the line should be modified to look like:

# Do not remove the following line, or various programs# that require network functionality will fail.127.0.0.1 localhost.localdomain localhost

Alas on Fedora, CentOS and other distros to set the localhost hostname, one more line should be added to /etc/hosts . The line to add looks like so:

After modification and adding the custom hostname name there the file should look something like:

After including correct records in /etc/hosts , next the hostname command is used to change the localhost name configured to show as a machine name on user ssh login:

Further to check that the new hostname is set for all ssh sessions incoming to the ssh server from now on the hostname command is used without arguments:

Even though now the hostname is changed to CustomHostName still, the hostname for the current opened ssh session is keeping the old hostname:

To see the hostname change in your shell prompt you will have to logout and login again to the system.

On Debian GNU / Linux the way to change the hostname there is a “debian way” approach:

Debian has a file /etc/hostname , which is there just for the sake of configuring the system hostname. During system boot process Debian reads /etc/hostname file and sets the machine hostname to the word inside. The /etc/hostname file is being red and configured by Debian’s /etc/init.d/hostname.sh shell script.

Therefore after changing the hostname in Debian by editting /etc/honstmame , the /etc/init.d/hostname.sh needs to be invoked for the new hostname to be set system wide, like so;

Just like with other GNU / Linux distributions for the new hostname to be active on the current shell a logout and login via ssh is necessery again.

With Fedora, CentOS and other Redhat based distributions the “proper” way to change the hostname is:
a. change the /etc/hosts way described above in the aticle.

b. Edit /etc/sysconfig/network file and write inside the new custom hostname.

After HOSTNAME value is set to the new desired hostname and file is saved, the network script should be invoke with restart argument:

[root@centos ~]# /etc/init.d/network restart One more thing to consider always when changing a hostname is that some of the system services are using the configured local machine hostname, and hence need to be restarted also from a active shell where the new hostname is already set and active.

Since the system hostname is being configured usually, with the rest of server configurations on system boot, after setting the desired hostname it is a good idea to have a system reboot. This will guarantee that all running daemons will read the newly set hostname:
E.g.:

On next boot the hostname should be set to whatever you put as a custom hostname.