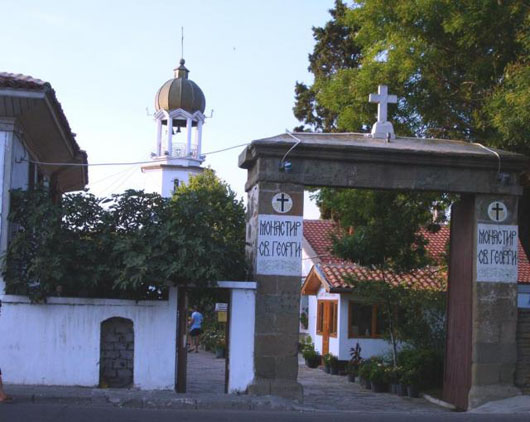 I'm currently once again on a pilgrimage in Pomorie Monastery St. George (Bulgaria) – EU as you should read in my previous day post. The brotherhood here is very hospital, since our coming (with Kliment), we were treated like being a part of the monks community. We're given food and allowed to eat together with the monks on one table and even we can enter into some of the interesting discussions after food :).
The life in a monastery is actually quite fascinating, though on the outside it seems boring.

As a general rule monks eat a meal twice a day. On Monday, Wednesday and Friday, the meals are cooked and served usually without oil (except if the Abbot didn't bless differently). The abbot in the Monastery is like a King. The order in the whole monastery resides very much a Kingdom, where the abbot is king some of the monks are his (left and right hand and counselors) etc.

The kitchen "district" has a (chef) cook lady, person/s (usually believing Christians) who help with cooking cutting and vegetables and various meal preparations etc. and serving the brotherhood and workers dinner and lunch. Oh yes I almost forgot, monks didn't eat breakfast. Their usual first meal is like 12 or 12:30 as a straight dinner.

As in Other Orthodox monasteries, here in Pomorie Monastery the monastery is named after the heavenly protector of the place Saint Martyr George.

The brotherhood life here is not as tough as the monasteries located in desert destinations, though just like in other mountain situated Orthodox Christian monasteries the monks has an established everyday Morning and Evening Church Service.

The morning Church service usually starts around 06:00 or 06:30, while on a feast days like Sunday (The Day of Resurrection of Jesus Christ) the service starts a bit later in 07:00 or at very special occasions in 07:30 …

The Evening Services usually start around 04:30 or 05:00 o'clock and continue (depending on Church calendar feast day (saint)) from 30 to 40 minutes up to 2, 3 hours (in biggest feasts or fasting periods).
All the monks should be present on Morning and Evening service, where a bell is rang whether the monks has to gather together for a Church service prayer.

As of time of writting officially Pomorie monastery has 4 monk brothers. One is the Abbot, the abbot's left hand, one other hiero-monk who sometimes is serving the Holy Liturgy church services and another monk who is in his 70s and is mostly doing Church book readings.
Occasionally the brotherhood accepts a novice pupils who want to enter the monastic life, but as long as my observations goes (during the few years I came as a pilgrim here) many of the novices find the monastic life for them and quit after a few months or a year time.

Just a year earlier the brotherhood, here had 6 monks. Unfortunately the oldest monk Father Tikhon who lived inside the monastery more than half of his life (40 years in the monastery W0W!) passed away after a short sickness and hospitalization.
Another one of the monks (Father Joanikius) was transferred by the Sliven's Metropolitan (named also father Joanikius) to serve his monkship (obedience) in our Bulgarian Monastery situation in Holy Mount Athos (Greece) , e.g. to Zographus monastery.

The Abbot of the monastery (Father Yierotej) is a young and energetic person (35 years old) with a good sense of humour and a great God given wisdom grace and joyful temper.

Besides the core monks brothrehood currently the monastery has 5 workers and about 5 to 10 persons (people who are in hardships and have no place to stay) and were accepted to get a healing and a life stabilization while living for a while in the monastery. Some of those people are almost full time living inside the monsatic walls helping with their knowledge and talents to the brotherhood
The overall number of people who inhibit the monastery is about rawly 15 people.
All this people are given free meals 2 times daily and eat together often either in the monastic kitchen or the dining-room (which is also serving as a guest room).

Before and after each meal intake the people gathered together in the dinner-room pray together asking Jesus Christ to bless their food and drink. Usually the Abbot whenever on the table is the one to ask God for a food blessing. After the meal is complete the Abbot or some of the monks says a thanksful prayer thanking Jesus for giving the daily bread and asking God to give us also the heavenly spiritual food.

The most common food eaten here is vegetables and fruits and in non-fasting days they eat some youghurt, cheese or fish. Eating meat however is un-common and most of the food consumed is fasting food (meat is considered inappropriate food for Orth Christian Monks).
The monastery is surrounded by a around a meter monastic walls. In the middle of the monastery is located the Monastic Church Saint Martyr George whichs basic walls dates back to the distant XIX century.

Facing the church about 40 meters from the Chuch are located the monks dwelling rooms also in monastic language called (cells). The monk's cell is full of icon and holy water, crucific crosses and all kind of faith related books so in a sense the monks room looks like a tiny Church.

Right in the middle of Pomorie Monsatery there is a holy spring – disease healing water which by God's providence healed the first Abbot and beneficient of the monastery (ironically the Turkish Abbot Salim Bey who converted from Islam to Christianity and donated all his land to the Bulgarian Orthodox Church in the 18 century when still Bulgaria was enslaved by Turkish).

The monastic yard is filled with green beautiful Peach and Plumb Trees. In the monastery yard they have sew of; potatoes, tomatoes, corn and few other "basic" self-grown. vegetables. 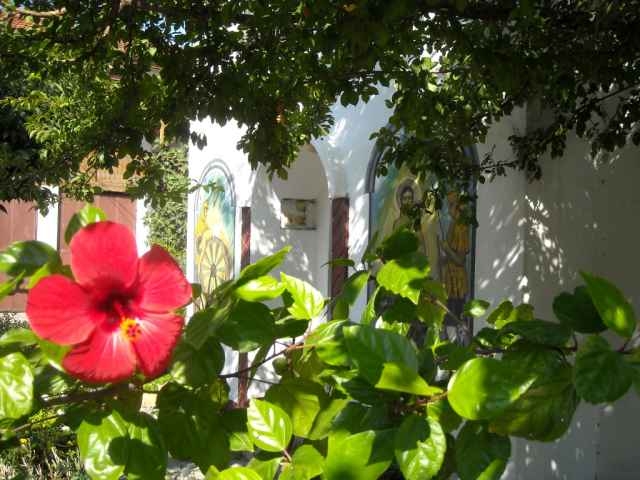 Along with the plants in one of the corners near the monastic wall there is a henhouse where some chickens and few turkeys are grown for getting fresh (natural) eggs.

In the old days the brotherhood was growing all their food by themselves as it was a tradition in the Monasteries, however with the changing times and the huge decrease of monks, growing all the monastic food on their-own became an impossible task ….

The monastery is mainly living on pilgrim or local believing people donations and the monastic land, as well as to sales of Orthodox icons and tiny faith related objects (crosses, holy bibles, church related books and literature) etc.

As I hear from some of the monks the harsh economic situation and severe world crisis that is plaguing the world also has a negative influence on the financial balance of the holy cloister too.
A monk shared with me the financial expenses of the monastery tend to be "dangerously" growing lately as the amount of people whose the brotherhood is feeding and taking care (healing) daily along with the money for restoration works are raising and the monastery experiences a shortage of money.
Still they're not discouraged but as I was told praying and hoping on God's grace to send them kind heart donators to help the monastery.

Most of the people who are in the monsatery not for a theraupetic reason (with a severe disease) work all day long. Though the work seems to be never ending here, one feels calm, relaxed and gracious.
Even staying for few hours here, makes you filled-up with God's grace and gives you new energy and hope to continue the harsh daily stress filled life.

Besides the Monastery the town of Pomorie is also very beuatiful and have all the facilities and entertainment a tourist might like to have from a modern beach resort. Yesterday I went and had my first beach time here in Pomorie.
Something interesting I noticed on the beach is the sand color which here in Pomorie is a bit blackish. The sea coast here near the beach is not big but feels cozy and there are bars near the beach shore, so anyone wanting to enjoy some of the world goods too can have a fanastic time here 🙂