I'm in Sofia for a couple of days being a guest to a friend (thx Nomen), after my stay for a week in BodesÄ‡e (a little village nearby Bled located in Slovenia).
Yesterday on my way to sleep I wanted to see a movie and asked Nomen to recommend me a movie. His recommendation was a German-Australian movie from 2004 called The Edukators – The Fat years are Over. I had absolutely no idea what it will be like so I didn't expected much but it seems the movie plot took my attention.

The movie plot revolves around 3 avarage German persons who live in Berlin. The three youngsters has just passed the 20s, Peter and Daniel (two close friends who hold some serious anti-capitalist views and does organize house break-ups without stealing.) Peter and Daniel's rich villas break-ups aim is idealistic, they don't steal but just change the order of furniture and leave messages to make rich people aware that money doesn't make them invincible…
Jule a girlfriend of Peter, becomes friend with Daniel and they fall in love, while Peter is away for a vacation. During Peters sojourn abroad Daniel tells Jule the secret (Peter and Daniel) are the Edukators whose break-ins has just recently become known via the local Berlin newspapers.
The Edukators group leave messages to every of the "victim" homes saying – "die fetten Jahre sind vorbei" – "The fat years are over", a sentence well known from the Holy Bible's story of Joseph in Egypt.

Jule works as a waitress in a luxurious restaurant but her payment is only good to cover her very basic needs as well as pay her debt (as she is already indebted as many youngsters in Germany).

Jule is more indebted compared to many of the young germans, since by accident she hit a rich businessman's car which costs 100 000 eur. Since more than a year she is working for paying the monthly bills to cover richman's car and she succeeded to pay only €55000 …

The Jule's "injustice" is just a part of the many injustices that are in society, but as the youngsters hold anarchistic and anti democratic views, this whole Mercedes crash accelerates as Jule and Daniel break up in the Luxurious Villa of the rich man whose car Jule is still paying.

Just like the other break ups Jule and Daniel change completely the order of the furniture and leave the threatening message die fetten Jahre sind vorbei , this time however they do even more as they decide to drop the sofa in the pool. These time Daniel and Jule's planning is more like an venture than just a well planned Edukators break-in. Suddenly the watchdogs in the yard start barking and the two youngesters has to move quickly to prevent being taken by the police patrol.
On the next day Peter is back from his vacation and Jule realizes her mobile phone is missing (probably fallen in the pool or somewhere in the richman's mansion)… On the next night Jule and Daniel, enter the house again in hope to find and cover-up the tracks they left last night and hopefully find, Jule's missing mobile.
They don't know however the richman would arrive his villa to stay for the night. As he enter his house, the businessman encounters Jule and immediately recognizes her.
Daniel being in the other floor comes down and hits the richman from behind and he enters unconscioness. As the two are panicked they call Peter and tell him about "the villa accident". Daniel arrives immediately and the three "revolutionaries" decide to take the wealthy man who as a hostage bringing him in Jule's uncle mountain hut.
The 3 anti-current system democrats and the representative of the wealthy class has to spend few weeks together in a small house each one exposing his stand point and philosophy. Little by little the 4 people become friends and a dramma between Daniel and Peter emerges as Jule is now in love with Daniel and Peter finds out …
Hardenberg (the 3 youngesters hostage) happens to be an ex-leader of a Socialist German Student Union some 35 years go … and tells a story how he and his union members hostiged a VIP german person in their youth days and how funny is that he is in the same situation like the person they hostiged so long time ago…
The movie is interesting as it really shows the sad reality and the falling democratic system which we have established and follow. It exposes the injustice of the system but it doesn't really offer a solution to the society and economic problems and injustices. 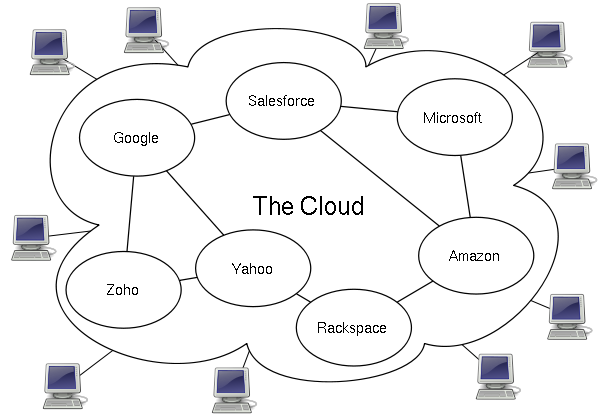 If you’re employed into an IT branch an IT hobbyist or a tech, geek you should have certainly heard about the latest trend in Internet and Networking technologies the so called Cloud Computing

Most of the articles available in newspapers and online have seriously praised and put the hopes for a better future through cloud computing.
But is really the cloud computing as good as promised? I seriously doubt that.
Let’s think about it what is a cloud? It’s a cluster of computers which are connected to work as one.
No person can precisely say where exactly on the cluster cloud a stored information is located (even the administrator!)

The data stored on the cluster is a property of a few single organizations let’s say microsoft, amazon etc., so we as users no longer have a physical possession of our data (in case if we use the cloud).

On the other hand the number of system administrators that are needed for an administration of a huge cluster is dramatically decreased, the every day system administrator, who needs to check a few webservers and a mail server on daily basis, cache web data with a squid proxy cache or just restart a server will be no longer necessary.

Therefore about few million of peoples would have to loose their jobs, the people necessary to administrate a cluster will be probably no more than few thousands as the clouds are so high that no more than few clouds will exist on the net.

Therefore it looks like in the future the cloud computing and the internet are about to become one and the same thing. The internet might become a single super cluster where all users would connect with their user ids and do have full access to the information inside.

Technologies like OpenID are trying to make the user identification uniform, I assume a similar uniform user identication will be used in the future in a super cloud where everybody, where entering inside will have access to his/her data and will have the option to access any other data online.

The desire of humans and business for transperancy would probably end up in one day, where people will want to share every single bit of information.
Even though it looks very cool for a sci-fi movie, it’s seriously scary!

This are only a few small tiny bit of concerns but in reality the problems that cloud computing might create are a way more severe.
We the people should think seriously and try to oppose cloud computing, while we still can! It might be even a good idea if a special legislation that is aming at limiting cloud computing can be integrated and used only inside the boundary of a prescribed limitations.

Institutions like the European Parliament should be more concerned about the issues which the use of cloud computing will bring, EU legislation should very soon be voted and bounding contracts stop clouds from expanding and taking over the middle size IT business.