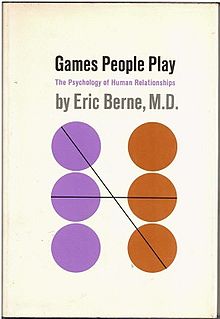 Dr. Eric Berne is highly regarded as one of the most notable psychology psychiatry scientists of our age.

He developed a theory called Transactional Analysis. That is heavy in use in American companies nowdays.

Berne is also preached by a lot of universities all around the world.
His theory concludes in a claim that each person has three person states embedded and throughout all his life, he jumps to one of these 3 states.

According to berne during daily lives we encounter other people who also have this three "hidden" persons born inside. So if a Child encounters a Parent or Adult encounters a Child a clash often occurs and this results in a lot of misconceptions angry faces, angry talks and hatred.

Therefore Dr. Berne advices, companies and individuals to learn to know in which state they're everytime they speak with someone and to understand in what kind of state the other person is to talk always in between people peers in one and the same state.

Here are few videos of Bernes himself explaining his Theory ,,,

Now with all my respect to psychology and psychiatry as important science for a functioning society.
I cannot fully accept Berne's idea and it is surely not working full time for the simple reason it is just another theory.
And theory is never fully proven it is a model of how someone sees the world.

From a Christian point of view his theory is rather destructive as it puts everything in a frame of games. If his ideas are continued on this would mean the life is just a game. This is rather untrue if we take all the poor people in Africa all the beggars and everyone who has hardships in life. Berne's theory builds up on the idea of one social benefits backboned society and not on democracy as we know it. The hungry man is hard to play, the people who can't find food and die from hunger don't play either. Another thing I think is very wrong with his theory is teaching people to act like robots and putting everything in some kind of a mathematical like framework.
He says, everyone should think like:

However it is fact that some people are not OKAY and they just want to use you. Berne's theory obviously is based on imaginative thinking that everyone on society is on the same level and everyone are conditioned in the same way. Is that true?? Will a person raised up in a Christian family told a philosophy to be good with people the same as a people raised up by a kid raised up by parents who has adherence for occult.
Talking about religion, the worst of the guys philosophy is that it rejects faith in God or anything but base the claim on a pure ahteistic world view ,,,

I've been told some of this crazy persons ideas while I was studying in Arnhem Business School. Right then I've rejected the theory told to me in classes exposing Berne's ideas I still reject it and believe Christians should stay away from Berne's psychiatry.

And finally I don't want to be a racist but just like Nitzsche and Freud he is also jew, a strange coincidence