These days, almost every home wireless ISP network router, ADSL modem etc. has its own local running DNS service. Generally this is very good as it puts off the burden of  Internet Service Provider DNS servers and "saves" multitude of users from so common overloads with ISP DNS Servers – caused by ISP DNS Service unable to handle the incoming user DNS (Domain resolve) traffic. Common scenario, where ISP DNS servers is unable to handle DNS traffic is when few thousands of users belonging to ISP gets infected with a Worm, Trojan horse or Virus doing plenty of DNS Spoofs and distributed DDoS attacks.

Though local DNS service (daemons) on local Cable and Wireless Network Routers is something designed to be good it becomes another bottleneck for DNS resolve problems, Calling the ISP tech support for help is often loose of time, as  in ISPs it is so rare to find someone understanding Linux Networking.

The periodic issues with DNS resolving from home routers in my observations has 3 main reasons;

DNS resolving problems are even harder to track whether Internet provider has policy to deliver Internet via automated IP assignment protocol (DHCP),

A very common scenario, I've seen is Internet coming via ISP ADSL / Network router installed at home and mis-configured due to a custom user installation,   or because of ISP technician who installed router in hurry or lacked good competency and messed up with Router Network configuration.

During the years I had to install various Linux distributions for Desktop use in networks located behind such mis-configured Network Hubs. Because of this mis-configured DNS, even though Linux hosts succesfully graps the IP addresses for host IP, Gateway and DNS, they occasionally create problems with Internet Connection leaving the user with impression that Linux is not ready for Desktop use or somehow it is the the Linux distro fault.

After giving an introduction I will continue further to exact problem I've faced with one such mis-configured just today. The same issue has happened in my sysadmin practice over and over again so many times. So finally I decided to write this small story explaining the whole scenario, its causes and fix.

I'm writing this little post from another Linux installation like this which is living on a small local network served by a Vivacom ISP through ADSL Commtrend SmartAX MT882 Router.

The Commtrend does NAT (Network Address Translation)-ting for whole local network, auto-assigning some DNS server to Natted IP PCs local Network addresses in IP raneg; (172.16.0.0-255). The DNS the router assigns for internet is with IP (172.16.0.1), where in reality the DNS on the router is run on Network interface with IP 1921.68.1.1, in other words belonging to the router from another network. Thus PCs connected via a UTP land-line cable connection does not see 192.168.1.1 – meaning Domain name resolving works not at all.
The solution is to assign a static IP address for DNS of Google Public DNS or Open DNS, while leaving the Linux host to automatically assign LAN IP and Gateway using DHCP – (Dynamic Host Configuration Protocol).

By default most Linux distributions use DNS configured in /etc/resolv.conf as a host DNS servers, however as CommTrend Network Router does provide settings for DNS Servers to be used for resolving along with other settings on each Linux host boot settings from /etc/resolv.conf gets ovewritted with the unreachable (from 172.16.0.255), nameserver 192.168.1.1.

Thus to work-around this on most all Linux distributions you can set /etc/resolv.conf to be overwritten adding a line to /etc/rc.local script (before its last line – exit 0);

This method is universal, but the problem with it arises, if on the Linux host is planned to run 24 hours a day. DHCP Servers on router has configured DHCP Expiry lease time, which is different on different routers but usually few hours i.e. (4 hrs). Thus in 4 hours, due to DHCP Lease expiry the Linux host will question the DHCP Server for IP, getting together with DHCP IP and Gateway Settings also a DNS IP (overwritting again /etc/resolv.conf – with local running ISP Router IP – 192.168.1.1). One stupid solution of course is to use good old Windows philosophy (reboot it and it will work).

Other little more intelligent but not very efficient solution to problem is to set a cronjob, to run every 1 minute and overwrite /etc/resolv.conf DNS setting.

Since the cronjob to overwrite DNS IPs runs every one minute it is possible the host ends up without internet from few secs to 1 minute, this might happen quite rare so for a desktop this is ok. Other inconvenience is it puts a tiny load on system every 1 minute. 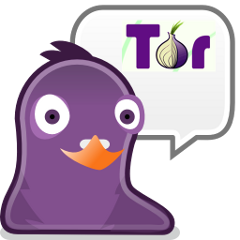 If you want to imrpove your internet privacy through tor-rifing your network traffic of ICQ and MSN networks.
Do the following:

3. Download and overwrite default polipo configuration with the one from torproject.org

This is necessary to configure in order to have polipo adapted to work with tor, so issue the following commands:

4. Restart polipo for the new config settings to take affect

Make sure in your /etc/tor/torrc you have existing the following two torrc directives:

6. Install pidgin if you haven’t got it installed already

If you already previously properly installed and configured version of pidgin.

9. In pidgin messanger do the following changes to configure it to proxy traffic via tor

In your either your existing ICQ / MSN pidgin account navigate to:

The default Proxy setting in Debian Sid/Squeeze would Use GNOME Proxy Settings however in other Linux distributions or *BSD it could be either No Proxy or some other setting.

The settings tor tunneling of traffic for Protocol MSN are analogous like for the ICQ Protocol so I won’t repeat myself on that.

This described tor tunneling for ICQ and MSN traffic should be applicable to other IM protocols under the same logic.
Here is the time to nota that the above instructions should be also applicable for Gain with minor changes or even without any.

Of course because tunneling traffic via Poplipo and it’s handling over to a tor node which will pass traffic randomly through different geographical locations whether tor servers reside will be more time consuming, so login account login time to your Messanger protocol of choice will vary and would be a bit longer.

The use of tor for your MSN and ICQ traffic is twofold:

1. Using tor anonymizing traffic network will keep your anonymity on the net private

2. Using the tor anonimity online services will let you access IM servers despite firewall blocking applied by administrators on certain places for instance (in your School or Your work env) and will therefore let you still use your favourite IM in spite of the applied firewall restrictions.

Anyways as we all know life is not perfect 🙂
Despite the slower logins and the bit slower message transmission, at least you won’t be easily tracable by third party prying eyes,
administrators or any other messanger spying sniffer traffic logger installed somewhere in between yourself and the end side of an IM server.

Hope this article helps somebody out there and will be a step further in the battle for securying your privacy online.