I was using Eaccelerator until recently on all Apache / PHP / MySQL  (LAMP) web-servers as a caching engine (Webserver accelerator) across all Debian GNU / Linux Lenny / Squeeze / Etch servers.
However recently, I've noticed in phpinfo output on some of the Debian hosts, that eaccelerator was loaded but showed:

Our servers are quite busy serving about 50 000 to 100 000 requests and thus not having enabled caching puts a lot of extra load on the CPU and eats a lot of memory which were usually saved by eAccelerator.
Logically I tried fixing the issues following some Stackoverflow threads recommendations such as this one but didn't work I tried playing manually spending hours trying to make eaccelerator run again and as a final mean, I even tried to upgrade eaccelerator to newer version but noticed the latest available eaccelerator version 0.9.6 was 2.5 years old (from 03.09.2012). Thus while there is no new release, just make s so just to make sure I didn't break the module with (default Debian bundled distribution package which is also installed on the servers)  re-installed eAccelerator from source .

This didn't worked either and since I was totally pissed off by the worsened systems performance (CPU load increased with to 10-30%) per server, I looked for some alternatives I can use and in the mean time I learned a bit more about history of PHP Accelerators, I learned some interesting things such as that  ionCube (PHPA) was the  first PHP Accelerator Apache like module (encoding PHP code),  created in 2001, later it become inspirational for  birth to PHP-APC (Alternative PHP Cache) Apache module.
There is also Zend Opcache PHP accelerator (available since PHP 5.5 onwards)  but since Zend OpCache caches well PHP Zend written PHP code and servers run PHP 5.4 + sites are not using Zend PHP Framewosk  this was an option.
Further investigation lead me to MMCache which is already too obsolete (latest release is from 2013), PHPExpress – PHP Encoder which  was said to run on Windows, Linux, FreeBSD, NetBSD, Mac OS X, and Solaris) but already looks dead as there were no new releases since January 2012) and finally Lighttpd's XCache.

To give you an idea on what exactly is the difference between Apache Webserver with PHP-APC Caching or other PHP Cacher enabled and the Standard way PHP Interprets PHP scripts below is a diagram:

Obviously my short research shows that from all the available PHP Cache Encoder / Accelerators only ones that seemed to be recently updated (under active development) are APC and XCache.
I've already used PHP-APC earlier on some servers and was having having some random Apache Webservers crashes and weird empty pages with some PHP pages and besides that APC is known to give lower speed in PHP caching than Eaccelerator and XCache, leaving me with the only and logical choise to use XCACHE.

Here is how Xcache developers describe their opcacher:

XCache is a free, open source operation code cacher, it is designed to enhance the performance of PHP scripts execution on servers. It optimizes the performance by eliminating the compilation time of PHP code by caching the compiled version of code into the memory and this way the compiled version loads the PHP script directly from the memory. This will surety accelerate the page generation time by up to 5 times faster and also optimizes and increases many other aspects of php scripts and reduce website/server load.


Thanksfully XCache is shipped by default with all Debians (Etch /Lenny / Squeeze / Wheezy)  Linuces so to install it just run the standard apt cmd:


Then to enable XCache all I had to do is edit /etc/php5/apache2/php.ini and place below code:

[xcache]
; ini only settings, all the values here is default unless explained

Note that Debian location which instructs xcache to load in Apache as a module is xcache.ini – e.g. /usr/share/php5/xcache/xcache.ini, so instead of placing above configuration right into php.ini you might prefer to place it in xcache.ini (though I personally prefer php.ini) because it is easier for me to later control how PHP behaves from single location.

To test whether XCache is enabled for Apache Webserver:

Create phpinfo.php somewhere in DocumentRoot (in my case this was /var/www/php_info.php)


When you access the php_info.php in browser you will get XCache loaded as in below screenshot:

To Test whether Xcache is enabled also for PHP CLI (applications set to run as a crontab – cronjob) :

Once it is tested as successful install you might want to enable the XCache admin (which is disabled by default), to enable XCache Admin on Debian you need to generate new password for it first like so:


Then you need to add in /etc/php5/mods-available/xcache.ini

To enable admin and be able to access it in a browser (if you're using as a documentroot /var/www/ and docroot supports interpretting php scripts and (has AllowOverride All) enabled to also support htaccess authentication do:

When you access http://your-url-address.com/xcache/ you should see in browser some statistics along with all configured xcache options: 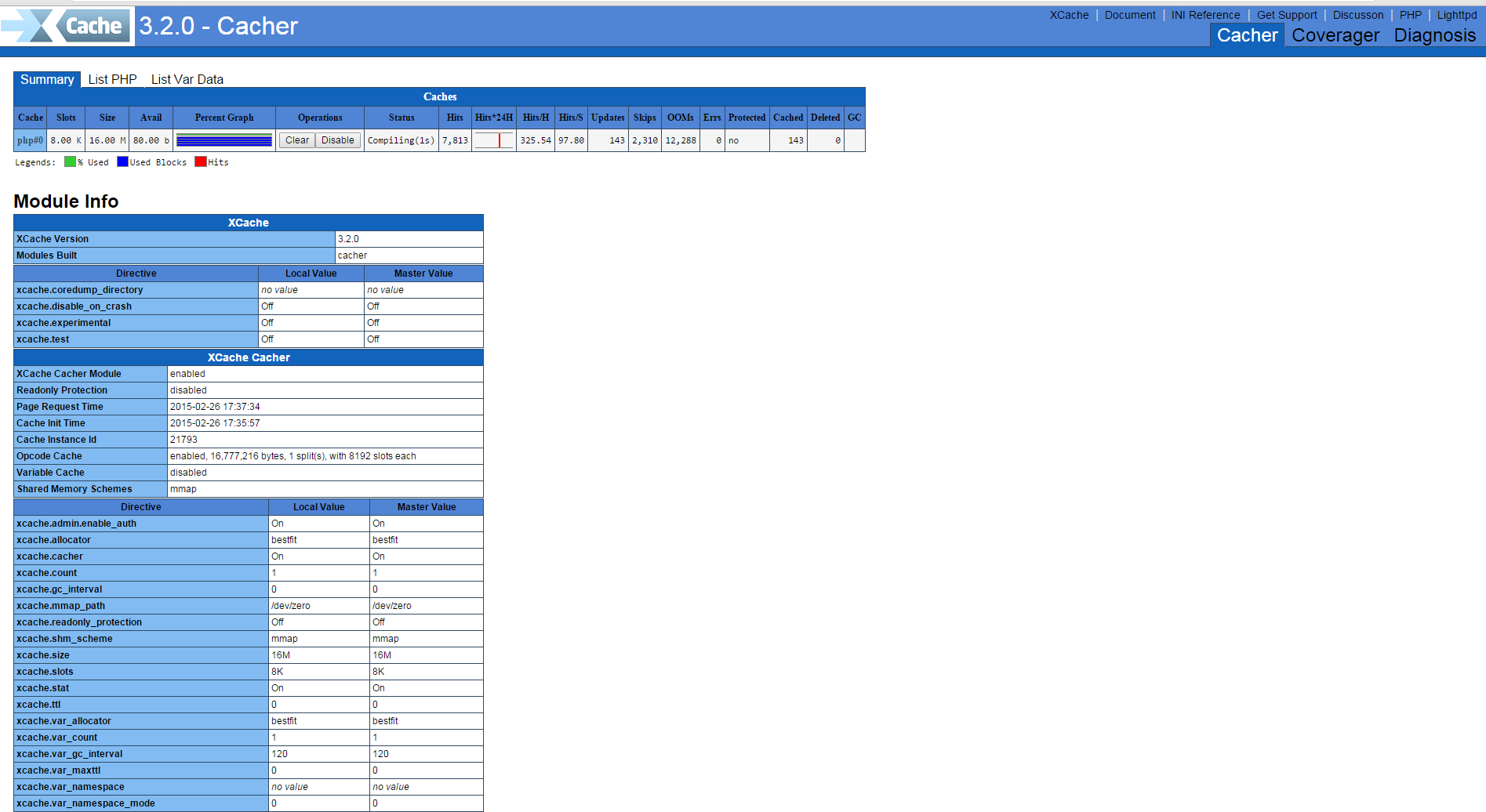 If you have time you can play with the options and get some speed minor speed improvements. The overall increase in page opening XCache should give you is between 100% – 190% !

One of the contact forms running on a FreeBSD server configured to work on top of Apache+MySQL suddenly stopped working.

The errors that appeared on the webpage during a page request to the form url was:

As you see in the output the website which was causing the issues was running a Joomla version 1.5.23 Stable configured with RSForm!ver 1.5.x (as a contact form solution) and Google Maps version 2.13b plugins.

came out of nothing, it’s really strange as I don’t remember doing any changes to either Joomla or the PHP installation on this server.
There is one more guy who has access to the Joomla installation which I suspect might have changed something in the Joomla, but this scenario is not very likely.

Anyways as the problem was there I had to fix it up. Obviously as the error message Fatal error: Class ‘SimpleXMLElement’ not found reported the server php simplexml was missing!

Just to assure myself the php simplexml extension is not present on the server I used the classical method of setting up a php file with phpinfo(); in it to check all the installed php extensions on the server.

Finally to solve the issue I had to install the module from ports php5-simplexml , e.g.:

Afterwards to make the new settings take place I did restart of my Apache server:

Now my Joomla contact form is back to normal 😉

If someone has any idea why this error occured without any php or server modifications, and how comes that all worked fine beforehand even though I did not have the simplexml module instlaled on the server o_O, I would be enormously greatful.

I’ve recently upgraded my FreeBSD Apache server from port www/apache20 I had some issues before I tune up and recompile also the php5 port but eventually it worked out, however the Eaccelerator content caching module failed to load as it was outdated.

That’s a common inconvenient with eaccelerator that every system administrator out there has faced once or twice, especially on systems that has custom compiled Apache servers and does not use a specific precompiled version of the eaccelerator.

To solve the situation as you can expect I jumped on in the /usr/ports/www/eaccelerator and removed the current installed version of eaccelerator in order to compile and install the latest port version.:
To do that I first attempted to upgrade the eaccelerator port with portmaster but as there were some problems caused by autoconf initialization etc., I finally decided to abandon the idea of using portmaster and did it manually with the good old well known trivial commands:

I’ve continued further and restarted my Apache server to load the new eaccelerator version and made a small phpinfo php script to test if the eaccelerator is properly loaded, yet with zero success.

After checking out in my /var/log/httpd-error.log , I’ve determined the following error:

The error is quite obvious, to solve it I’ve opened my php configuration file /usr/local/etc/php.ini and placed in it:

and substituted the line:

Further on I gave Apache another restart with:

followed by another test if the eaccelerator is loaded with the phpinfo(); script.

Another consult with /var/log/httpd-error.log now revealed me another eaccelerator error you read below:

I did about 20 minutes of investigation on the internet looking for a possible fix which gave me some idea what might be the cause for error message, though it was finally my try/fail methodology that helped me solve the issue.

Now after restarting the Apache server once again eaccelerator has properly been loaded once again.