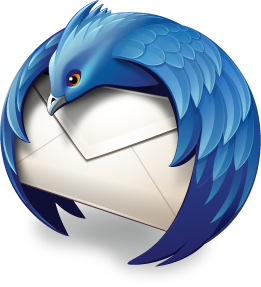 After configuring a new Qmail+POP3+IMAP with vpopmail install based on Thibs QmailRocks I faced some issues with configuring mail accounts in Mozilla Thunderbird. The problem is also present in Microsoft Outlook Express as some colleagues working on Windows reported they can't configure there email accounts in Outlook either.

The issue was like this, the mail server is running fine, and I can send without issues directly from the server shell with mail command, however in Thunderbird I could only fetch the messages via POP3 or IMAP, whever I give a try to send one I got the error:

Sending of Message Failed
The message could not be sent using SMTP server for an
unknown reason. Please verify that SMTP server settings are correct and try
again, or contact your network administrator

Here is a screenshot preseting the issue, taken from my Thunderbird:

The reason for this error is an automatic setting that is being configured in Thunderbird in New Account Creation time:
Thunderbird queries the mail server and asks for the type of encryptions available for both POP3 and SMTP MX primary host.
Seeing that it supports STARTTLS data transfer encryption mail protocol for both POP3 / IMAP, Thunderbirds auto configuration does place STARTTLS to be used with SMTP and POP3

The incorrect setting which is being automatically filled in can be checked in following these Thunderbird menus:

If the configured mail account MX server is let's say mail.exampledomain.com one needs to Edit the settings for this SMTP auto configured domains and he will see some example settings like the one shown in the below screenshot: 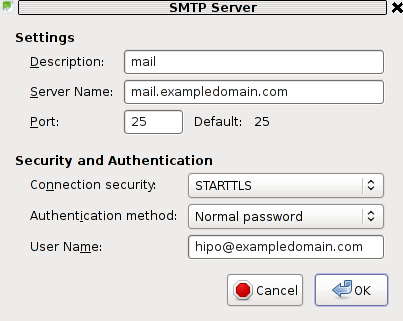 You can see from above's screenshot that the auto configured Connection Security setting is improperly set to: STARTTLS. Usually STARTTLS should be working on SMTP port 25, however it seems the problem consists in the fact that the MAIL FROM and RCPT TO is sent in incorrec time (ain't sure if its before or after the encryption).

Therefore the consequence of this failure to use STARTTLS being detected as the correct encryption type for SMTP lead that the new configured mail server clients were unable tot properly connect and send emails via the SMTP listening server on port 25.

On Thibs QmailRocks and some other Qmail installstions based more or less on qmail.jms1.net service damemontools scripts, this can be done by simply changing a line:

The qmail start up scripts which these change has to be done if one has configured a mail server based on QmailRocks Thibs updated tutorial are:

After the correct modifications, of course as usual a qmail restart is required, e.g.:

Making this changes, irradicated the sending issues. It's best practice that the account which had issues with sending before is deleted and recreated from scratch.
Hope this helps somebody out there who encounters the same issue. Cheers 😉

Does a few seconds delay until my configured qmail greeting shows up. This is not a a deadly problem, but the delay itself might have a negative influence and make the host look like a spammer host to someone, hence I took few seconds to find a way to reduce this SMTP port connection delay.

The mail server responds on port 25, using qmail-smtpd so it was logical delay is caused somewhere by /service/qmail-smtpd/run (which actually links to /var/qmail/supervise/qmail-smtpd/run).

I did a quick review of /var/qmail/supervise/qmail-smtpd/run and found two lines that possibly create unnecessery delay, cause on each and every Port 25 connection request from repote SMTP server /usr/bin/head and /usr/bin/which are executed.
Here are two lines in /service/qmail-smtpd/run, I refer to:

The script was smartly written as planned to run on multiple Linux distributions. However since QmailRocks Thibs guide and my particular case needs to run on Debian Linux I think this is totally waste of system CPU time.

Therefore I substituted above two lines with:

I checked in /var/qmail/control/me I have only my primary mail server host defined, cause otherwise this changed could pose random mail server errors:

If you don’t want to temper manually edit the script the quickest way is to overwrite old script with changed one, i.e.:

To test connection time delay afterwards, you can use:

Well still there is a connection delay – it is not so quick as smtp.gmail.com, but now connection response delay is better. For sake of comparison here is same test with Google’s SMTP:

BTW a bit of time delay sometimes, can have a positive impact against spammers, as it can reduce a bit the amount of spammer mail servers connecting to the host. So i’m not sure if being 4 times slower in connection than Gmail is necessery bad 🙂

I was completely puzzled initially by the error as the sertificate file /var/qmail/control/servercert.pem was an existing and properly self generated one. Besides that qmail daemontools init script /service/qmail-smtpd/run was loading the file just fine, where the same file failed to get loaded when sslserver command with the cert argument was invoked via /service/qmail-smtpdssl/run

It took me quite a while to thoroughfully investigate on what’s wrong with the new qmail install. Thanksfully after almost an hour of puzzling I found it out and I was feeling as a complete moron to find that the all issues was caused by incorrect permissions of the /var/qmail/control/servercert.pem file.
Here are the incorrect permissions the file possessed:

To fix up the error I had to allow all users to have reading permissions over servercert.pem , e.g.:

After adding all users readable bit on servercert.pem the file permissions are like so:

Consequently I did a qmail restart to make sure the new readable servercert.pem will get loaded from the respective init script:

Now the annoying sslserver: fatal: unable to load certificate message is no more and all works fine, Hooray! 😉