Some people might argue me but recently and over the last years, I had thoughts over the  so common nowadays problem of constipation. I think constipation  is God judgement on our increasingly gluttony self-love instead love for others, ungodliness  and our multiple sins.

I'm deriving this conclusion from my personal experience with constipation, every-time I over ate forced by my gluttony (partially forced by the over filling from everywhere with marketing to eat),  I get constipated. Constipation is one of the worst experience one can get and probably there is no person on earth who didn't experienced this in a stage of his earthly life. Probably half of the world is suffering from this terrible problem at least few times a year, where the frequency of constipation around people tends to be increasing with every consequential year.
Most of people from western world countries are in a number of times suffering more compared to less developed countries.

Main reason for increased constipation percentage in the western world (in my view) is the bad quality of half-artificually produced vegetables and fruits. Many of which grows as you should know grows in laboratories like places in order to do a cost saving for the companies. Due to the marketing hype and fuzz that took over westerners, many as a trick use the "green product" labeling just to make you convince their product, where in reality the product is far from green.

I think, God allowed the poisons which we hold in our hearts to materialize in our food as a punishment for our lack of repentance.

The hyper consumption that is ruling over western europe model is trying to spread itself in the less developed countries as well, while maybe a  billion of peoples all around the world are on the edge to die from hunger. In the west all businesses are trying to restructure themselves to more green friendly / (more green), whether parallel with that the same 'environment concerned businesses' are stimulating people to over consume through their marketing departments. Tell me isn't that one huge hypocrisy? How comes on one place a company talks about any efficiency if its fruits are inefficiency (over consumption)?

In the past days people consumed much less than today and less varied foods, still most of them were more heatlthy and many of them lived to an older age compared to know (this is a fact that one can learn not from the fake company statistics on the internet  trying to all the time show that the age barrier is increasing, this can be learned from our grandmothers and grandfathers and a bit of staring into history).

"Seed Companies" like Monsanto are already dominating the markets and killing the little farmers, so every next day, less and less of original God blessed plant seeds is left on earth. And even those who still are trying to be individual middle and little farmers are forced to buy already a genetically or hybrid modified seeds so a lot of the grown vegetables or fruits  is not grown through God blessed and given original food fondamential but some kind of 'human laboratory altered' plants. Most people and companies doesn't care if the seed is blessed or not by God or what kind of seed or food it is due to the fact they have long ago rejected God and do operate all their life with no God in their mind, but with the only goal for more and more pleasure and self-fulfillment of interests. It is sad really our bodies are constipated but it all starts from our soul constipation, we don't develop our souls in God's knowledge of good but advance instead in the "constipation" of  evil.

But constipation is not so bad in reality and it can be seen as a blessing from God as all pain makes us re-think over life and our deeds. Thus I believe though many might argue me, Constipation is just another of God's innumerous mercies over man to turn us to repentance and prayer.

But I think still there hope as long as each of us tries to be good or develop for good and pray to God, I believe all can be changed our soul and body constipation can be removed through God's power and mercy – only we have to strive for it ….

A friend of mine (Dido) who is learning C programming, has written a tiny chat server / client (peer to peer) program in C. His program is a very good learning curve for anyone desiring to learn basic C socket programming.
The program is writen in a way so it can be easily modified to work over UDP protocol with code:

Here are links to the code of the Chat server/client progs:

To Use the client/server compile on the server host tiny-chat-serer-client.c with:


On the server host tiny-chat-server should be ran with port as argument, e.g. ;

To chat with the person running tiny-chat-server the compiled server should be invoked with:

123.123.123.123 is the IP address of the host, where tiny-chat-server is executed.
The chat/server C programs are actually a primitive very raw version of talk.

Acid3 Test is a group of browser compitability tests. Acid3 test is a good indicator on how Web ready is your browser. 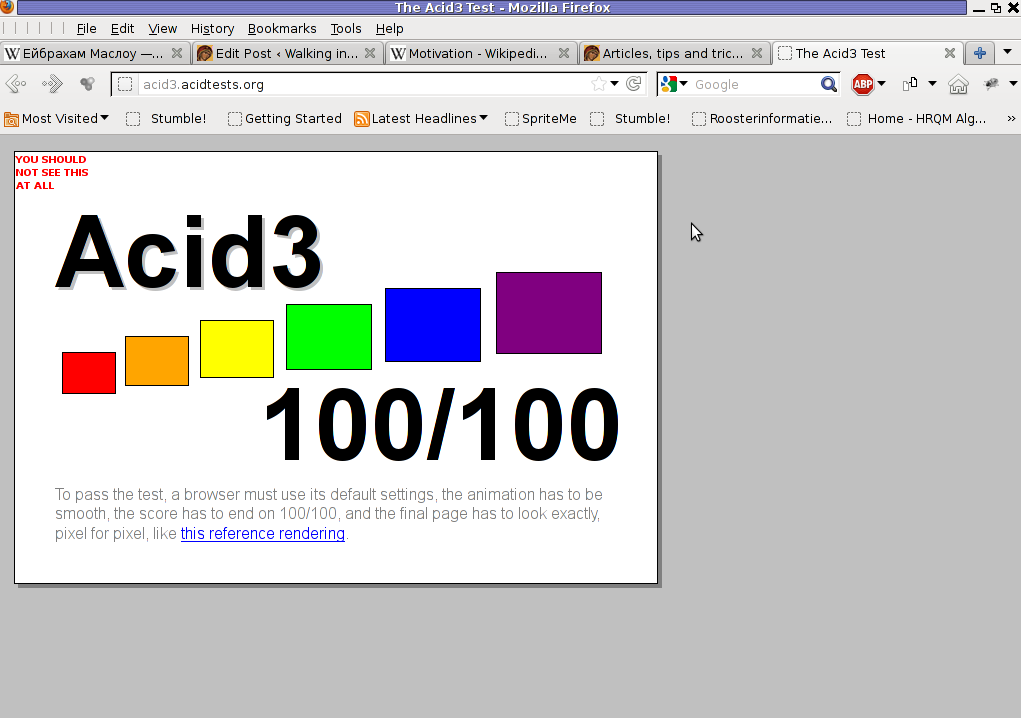 The tests involved are testing browser for: 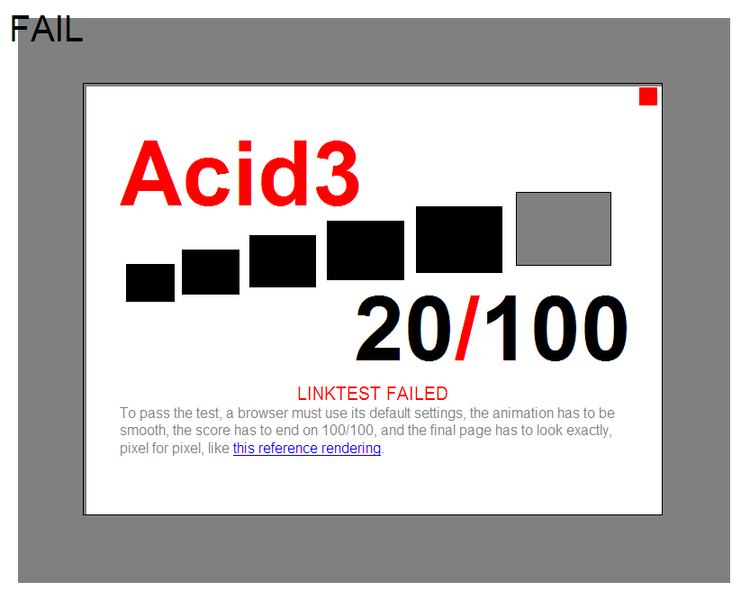 The Acid3 test is written itself in Javascript. It consists of 6 testing "stages" (buckets) upon which the browser tested is evaluated.
Each of the test is represented visually by a rectangle. If the a test stage is passed you see a new rectangle appearing in the tested browser.
In wikipedia, there is a thorough list with web browsers by type and engine and the level of support for the Acid3 test.
The test is of great use if you're web developer. 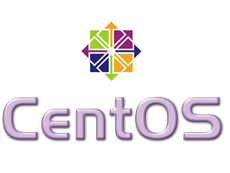 Just recently it was necessery to load up a tun kernel module on few CentOS Linux servers.

I’m using Debian on daily basis, and everybody that had even little of experience with Debian should already be aware about the existence of the handy:
/etc/modules file.
On Debian to enable a certain kernel module to load up on Linux boot, all necessery is to just place the kernel module name in /etc/modules.
For example loading the tun tunneling kernel module I issue the command:

I wondered if CentOS, also supports /etc/modules as it was necessery now to add this tun module to load up on CentOS’s boot.
After a bit of research I’ve figured out CentOS does not have support for adding modules names in /etc/modules , anyhow after consulting CentOS documentation on http://www.centos.org/docs/5/html/Deployment_Guide-en-US/s1-kernel-modules-persistant.html , I found CentOS and RHEL use /etc/rc.modules instead of Debian’s /etc/modules to load up any custom kernel modules not loaded by default during system boot.

Therefore instructing the RHEL Linux to load up my desired tun module in kernel on next boot was as easy as executing: