The Shepheard of Hermas an apocrypha book, used by some early Christian heresies 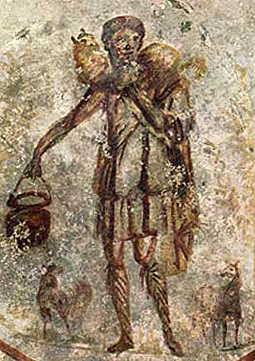 Heresis in Christianity, has seen long time ago been sprawling and trying to infect the correct Christian faith we shold have.
One very famous apocrypha book which was very modern around “alternative” faith seekers is The Shepher of Hermas – The Good Shepherd
The work has been well known in the west and has been widely copied in the middle ages.
The original work dating is probably either to the 2nd cenruty or to the distant 88 – 97 year after Christ.
The work is actually something similar to the Revelation of John, though it’s most probably.
The book consists of five visions granted to Hermas, a former slave. This is followed by twelve mandates or commandments, and ten similitudes, or parables. It commences abruptly in the first person: “He who brought me up sold me to a certain Rhoda, who was at Rome. After many years I met her again, and began to love her as a sister.” As Hermas was on the road to Cumae, he had a vision of Rhoda, who was presumably dead. She told him that she was his accuser in heaven, on account of an unchaste thought the (married) narrator had once had concerning her, though only in passing. He was to pray for forgiveness for himself and all his house. He is consoled by a vision of the Church in the form of an aged woman, weak and helpless from the sins of the faithful, who tells him to do penance and to correct the sins of his children. Subsequently he sees her made younger through penance, yet wrinkled and with white hair; then again, as quite young but still with white hair; and lastly, she shows herself as glorious as a Bride.

This allegorical language continues through the other parts of the work. In the second vision she gives Hermas a book, which she afterwards takes back in order to add to it. The fifth vision, which is represented as taking place twenty days after the fourth, introduces “the Angel of repentance” in the guise of a shepherd, from whom the whole work takes its name. He delivers to Hermas a series of precepts (mandata, entolai), which form an interesting development of early Christian ethics. One point which deserves special mention is the assertion of a husband’s obligation to take back an adulterous wife on her repentance. The eleventh mandate, on humility, is concerned with false prophets who desire to occupy the first seats (that is to say, among the presbyters). Some have seen here a reference to Marcion, who came to Rome c.140 and desired to be admitted among the priests (or possibly even to become bishop of Rome).
After the mandates come ten similitudes (parabolai) in the form of visions, which are explained by the angel. The longest of these (Similitude 9) is an elaboration of the parable of the building of a tower, which had formed the matter of the third vision. The tower is the Church, and the stones of which it is built are the faithful. But in the third vision it looked as though only the holy are a part of the Church; in Similitude 9 it is clearly pointed out that all the baptized are included, though they may be cast out for grave sins, and can be readmitted only after penance.
In spite of the grave subjects, the book is written in a very optimistic and hopeful tone, like most early Christian works.Our Church the estern Orthodox Church identintifies the work nowadays as a heresy, so any man determined ot read it better do it with a blessing of his spiritual father, otherwise man is risking to have a serious harm on his spiritual state.
We should be well aware that since the book is talking against the presbyters in the early Church and does criticize the spiritual authority ok Christ’s early church it has to be considered as a dangerous reading for us the comtemporary Christians.
However I thought mentioning the book here would be interesting, since it’s so ancient and therefore with a high historical value, not to mention it is so similar by some things with its ideas to early Christianity.

Tags: The Shepheard of Hermas an apocrypha book, used by some early Christian heresies

This entry was posted on Tuesday, August 10th, 2010 at 4:12 pm and is filed under Christianity. You can follow any responses to this entry through the RSS 2.0 feed.You can leave a response, or trackback from your own site.

One Response to “The Shepheard of Hermas an apocrypha book, used by some early Christian heresies”