This weekend I went with my wife for a Trip To Troyan monastery from Sofia – bus ticket currently costs 12 lv (6 euro) and the distance is rawly 160 km.

Troyan is a remarkable mountain city situated in the center (heart) of Bulgaria, famous with being one of the main places where opposition and preparation for the Turkish Bulgarian war occured. Troyan monastery situated near Oreshaka village was one of the places where the idea of liberation of Bulgaria originated. Troyan was often visited by the remarkable revolutionaries and greatest Bulgarian heroes of all times like Vasil Levski and Hristo Botev. Here in Troyan there was existing one of the many secret commitees in period (1869 – 1876) – Central Secret Revolutionary Committee (BRCK – as widely known in Bulgaria), creation of this commitee become reality thanks to the Deacon Vasil Levsky who saw there is no awakened Bulgarians to fight for national freedom.
Efforts of CSRC later lead to Liberation of Bulgarian from 500 years Bulgarians being under the yoke of Turkish Slavery. Our first impressions from Troyan were quite negative, the bus station looks post communistic and a little bit like a horror movie, near the bus station there was a lot of criminal looking gipsies.
Just 5 minutes walk from there is a small beautiful park with children playground, what impressed me most in the park is a bush cutted in the form of ancient amphora and next to the park is the city center surrounded by a river Beli Osym, all from the city center you can see the beatiful mountains all around. There are two historical museums filled with archaelogical remains from early ages, national dresses, weapons from the Liberation war, explanation with chunks of history and Bulgarian national heroes connected to Troyan, there are beautiful expoisitions on how locals used to live through the ages museums, famous paintings original of local artists … Bulgaria is a unique country, because of it combines outstanding nature and rich history remains of which is well preserved and standing firm testifying about the Bulgaria glorious past. 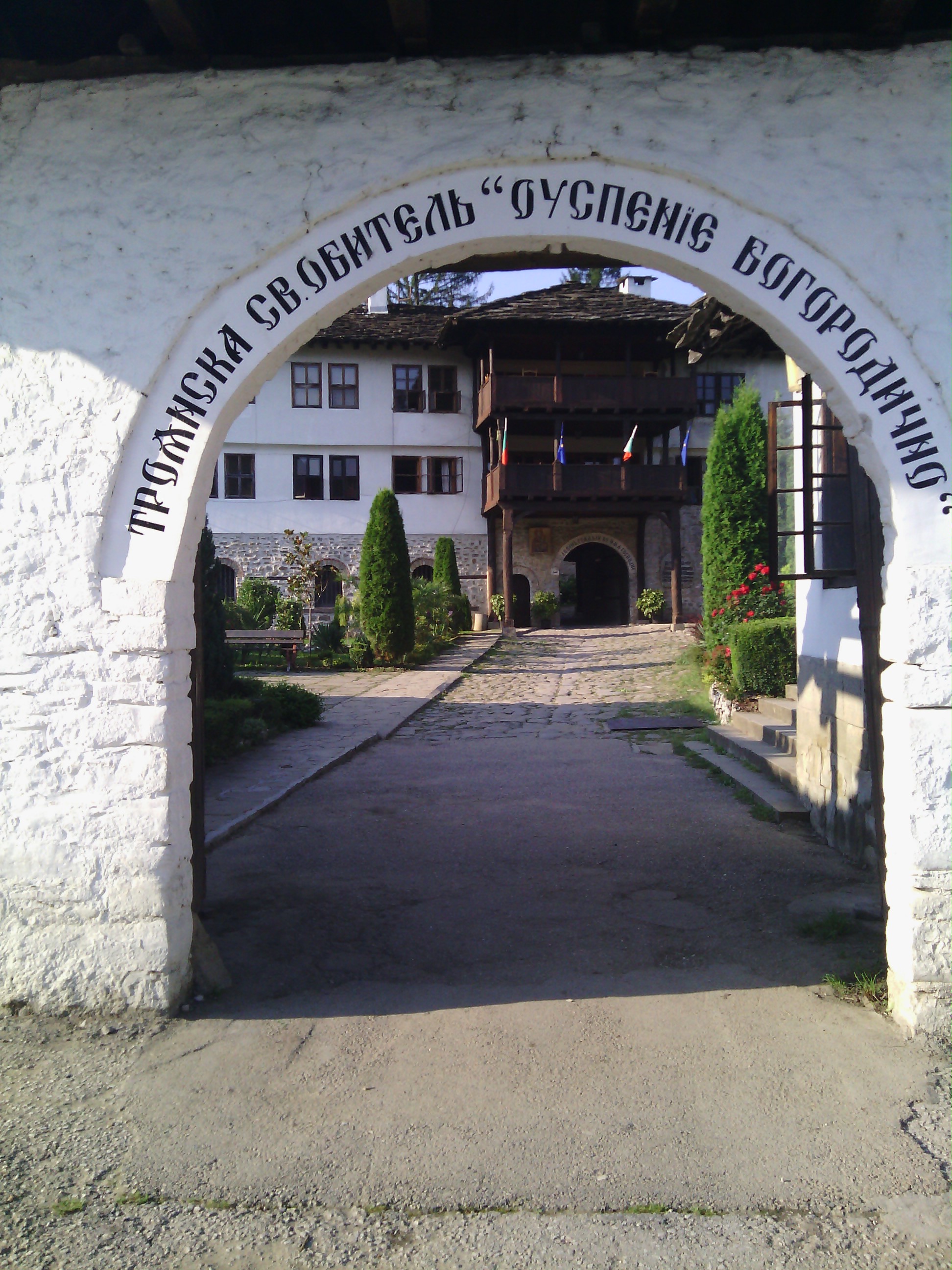 After taking a walk in the city center, we went to a local city bus station to take a bus to Oreshaka village – at the end of which is located Troyan Monastery. His Beuaitutide Patriarch Maxim who passed away 98 years old was born in Oreshaka village and become monk in Troyan monastery and was a brother of Troan monastery. Currently his holy body is buried in the monastery which is titled "The Dormition of the most Holy Theotokos".  One can feel the place is graceful even from reaching near Oreshaka village, the near view is also stunningly beautiful. The bus from Troyan has a bus stop right in front of the monastery and is cheap (costed only 1.90 lv per person 0.80 euro cents). Bus to the monastery travels 4 times a day, so it was convenient to reach the monastery.
Oreshaka and Troyan region is well famous since ancient times with its skillful craftsman and all kind of crafts developing. Near the monastery there is small chapel from which the monastery started, the history of Troyan monastery, all revives around the miraculous icon of Holy Theotokos (Troeruchica – The Tree Handed Virgin). The monastery story revives around this icon, a monk from holy Mount Athos was travelling to Vlashko (nowadays situated in Carpathians – Romania near border with Moldova), on his way he heard about a hermit with his pupil living near Oreshaka region and spend some time in fasting and prayer with the hermit local people heard about the miracle making icon and come from near and distant regions to venerate the Holy Virgin and pray. When the time come and he decided to move further in his trip to Vlashko he put the icon on his settled horse, made the sign of the cross and walked after few steps the horse stumbled and break his leg, in this event the monk understand it is not God's will to travel and he returned back to the hermit. After spending some time with the hermit, he settled again his horse but on exactly the same place the horse fall again – in that the monk understood this happens because the icon wants to stay on that place. The hermit offered to the monk that he stay there and they service God together, but traveling monk rejected, he venerated the holy icon for a last time and continued his travel to Vlashko. A small brotherhood formed by God's providence near the hermit and they decided to make a small wooden Church for Troeruchica and started servicing God there. This is how Troyan monastery started in the XVI century. The Glory of the Holy icon of Virgin Mary (Troeruchica) quickly spread all around enslaved Bulgarian lands and people come from all regions to pray to the Virgin to cure them, grant them good fortune, good health, solve spritual and family problems … The notes over the last 400 years shows that everyone that come with faith and prayed in front of the Virgin icon found confort, healing, numb started talking, deaf started hearing, paralytics walked.

Monastery chronicles say that thanks to the Theotokos Troeruruchica in year 1837 the icon saved the locals from the black death which was taking its toll in the region, nobody that came to the monastery to ask for protection from the plague didn't suffered plague, everyone that decided to stay in the monastery during the plague survived, even though people from all around were coming to confess and take the sacraments, no one in the monastery wasn't infected by plague.

We arrived in Troyan Monastery around 16:30 and by arriving were hospitally accepted by our marriage godfather Galin and his sister Denica and were threated with fresh watermelon and even 50 grams of Bulgarian traditional drink Rakia. They're currently painting walls in the monastery dining room in 18:00 we had the blessing to attend the evening Church service. The service was deep and unique experience that moves you to the Kingdom of heaven. After the Church service we went to nearby Mehana Kaizer (Old Bulgarian Dining Inn – Krychma whole made to look in Old Bulgarian Style – there is plenty of traditional food to choose and food was super delicious 🙂 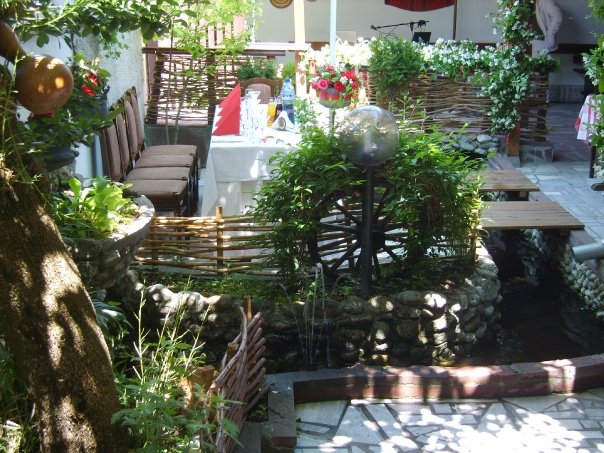 On Sunday 10.08.2014 we were for the Holy Liturgy service and after that we walked through the monastic Church and saw near the Church the bell tower and next to it the old monks monastic graveyard. We visited also the museum of the monastery which contains various religious use objects dating back from year 1700+, old  craftmen instruments, old icons, potirs, priest clothes, old coins from all around the world and Bulgaria. There was a lot of information about historical facts regarding the monastery brotherhood, as well as some chronicles and documents explaining participation of the monastery in the fight for national freedom of Bulgaria. The musem is made of two rooms one of which was the same room where the Apostle of Freedom Vasil Levsky – one can see there the exact hiding place which Vasil Levsky was using to sleep secretly – the hiding place looks like a normal wardrobe. After seeing the museum, we went to see the monastic Scyth – "Saint Nicola", which was used earlier by the monks, whenever they wanted to have period of seclusion to raise their spiritual life. The Scyth has a large Church in honor of Saint Nicolas, most likely this Church was visited by people from the village, in times when Christians in Bulgaria was forbidden to attend Church services by Turkish Empire – and this is why it was build in such a secluded place. Near the scyth is the grave of a famous rebel for Bulgarian Freedom, and there is a cave with a spring. Then we walked back the road to Troan Monastery and near the monastery, we went to see workshop of a carpenter lady who makes wooden ornaments for Churches in the region and the monastery. The lady give us some herbs as a blessing. We had the chance to also take the blessing from the current Abbot Biship Sionij who was earlier rector of Sofia's Seminary Saint "John of Rila".

This entry was posted on Tuesday, August 12th, 2014 at 9:06 pm and is filed under Christianity, Everyday Life, Various. You can follow any responses to this entry through the RSS 2.0 feed. You can leave a response, or trackback from your own site.