If you are using  Windows 7 or  Windows 8 Operating System inside a corporate network and your notebook PC is inside domain controller controlled by some crazy administrators who for some reason decided to remove the Taskbar from your Taskbar tray you have come over to exactly same situation like I do here.

Actually some might have experienced an icon "combined" feature which gives the opportunity of some of the standard Tray icons we know since Windows 98 / XP onwards to not show full time in order to save you space. No doubt this feature is great one to use as it is distracting sometimes to have a tons of applications constantly keeping in the Taskbar (right down corner) however if the Active Domain admin did it without any notification and you're a kind of victim you might dislike especially since this behaviour is making you impossible to easily control your phone / headspeakers and mic.

If you check in the Control Panel and click on Sounds  menu in Windows 7/8, you don't see any checkbox for adding the icon back as I have assumed, , but instead all the audio there you can only see the inputs and outputs on your system general settings. 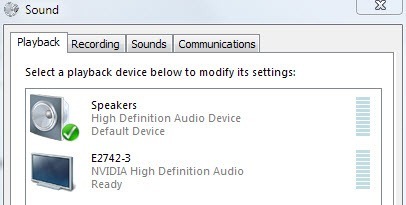 This behavior was made on purpose and makes sense cauze the taskbar icons since Win XP (if not mistaken) has to be controlled by the taskbar settings pan.

Thus in order to bring back the disappeared icon on  Winblows 7 / Win 8 there is a taskbar properties feature enabling to to hide or view the various taskbar running apps in that number the Volume icon, hence to bring back your Volme Control speaker icon to taskbar you need to customize it.

To do so do a mouse Right-click anywhere on the taskbar and choose Properties. 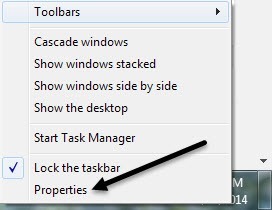 Now, click on the Customize button under Notification area. 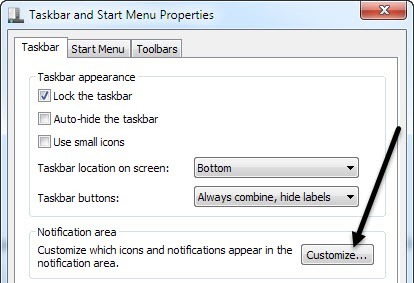 In  Notification Area Icons dialog box, there is 2 ticks to check. Assure yourself the volume icon default behavior is set to

To make the new behaviour active click on Turn system icons on or off.

One thing to note here is the volume icon shoukld be set to On like in below| shot:

If the reason for the disapperance of the Volume controller in task is not due to Domain Controllear policty it could happen due to late updates pushed by Microsoft if the PC needs a restart or after computer Log off operation.
Another reason for the casual disappearance of sound box could be also a buggy driver, so if the icon keeps disappearing over and over again, you better try to update the driver for your sound card.

However if you end up in a Windows Domain Controller (AD) Policy that is prohibiting the Sound Voulme to appear on your taskbar like in my case all the above won't help you solve it, but luckily there is an easy way to invoke the Volume Control dialog box via

the command will bring up the Volume Control as in upper left corner of screen like in below screenshot: 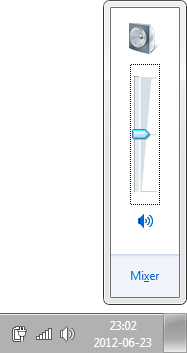 If you to show it with a silder use -f flag


opens the volume mixer, as you noted.

On windows XP the respective command to open a missing Volume Control dialog in taskbar, use instead:

to display volume control only (as per sound icon)

If you have the Volume Controller behavior to be hidden or you need to view any other taskbar hidden application icon  it will be useful for you to use:

AutoHotKey Win+B to focus on the system tray, Left (arrow) to highlight the Volume Control icon

, and then Enter to bring up the popup.

A good tip you might be interestted to use occasionally is  how to show the current Wireless networks via a command (if that's prohibited otherwise via GUI) so you can easily see the  Connected Networks on Windows using cmd:

This entry was posted on Thursday, March 9th, 2017 at 3:22 pm and is filed under Curious Facts, Everyday Life, Various, Windows. You can follow any responses to this entry through the RSS 2.0 feed. You can leave a response, or trackback from your own site.