Holy Reverend Martyr Luka (the bulgarian name for Luke) was born in city of today's Edirne ( Odrin ) formerly known as Adreanopolis to pious Bulgarian parents – Atanas and Dominica. After the early death of his father, his mother gave him to a rich merchant from (Zagor) today's city Stara Zagora in Bulgaria, who treated him like a son.
The merchant once went to Russia, taking 13-year-old Luka with him.
On his return he stopped in Constantinople.

There Luca quarreled with a turk and started beating him. Then the enraged Turks captured him and wanted to kill him.
The frightened Luke shouted: "Let me go! I will convert to Islam!"

The turk immediately took him in and forced him to renounce Christ and convert to Islam, which the young boy did out of fear.
But after the fear passed, Luke became frightened by his action, lost his joy, and began to repent bitterly.

He reported himself to his batismal father (have to say at that time the importance of the God-father was very enormous much more than today).
His father tried to release him with the help of the Russian ambassador.
But the evil turk, instead of freeing the boy, tied his hands and forcibly circumcised him.

After some time, Luca managed to escape from this Turkish home where he was forced to work as being counted a member of Islamic community and introduced himself to the Russian ambassador, who in attempt to save him from his slavery, sent him to the cities of Smyrna and Tire.
There Luke became seriously ill and, fearing death, called a Christian priest.
After hearing his confession, the priest advised him to retire to Mount Athos and repent there under the guidance of virtuous men.
After his recovery, he actually followed the advice of the clergyman and entered the Iviron  Athos Monastery, where he was restored to his Christian faith through the sacrament of Holy Anointing. 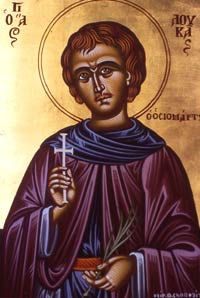 Saint Luka of Odrin ( Adreanopolis ), the saint is well known in Greece as Saint Luke of Mytiliny (Mytilene a main city
in Lesbos Island Greece)

From there he moved to the Stavronikita Monastery, where he received a monastic vow.
But the enemy of human salvation did not give him peace.
Continuously Driven by temptations, he fled from one monastery to another. He went to the  Bulgarian "Zografski" ( Zographou ) monastery (from where he returned to the world, but failed to calm down, came to Mount Athos again) and then consequentlially to  Xyropotamou, Koutloumousiou  ( Kutlumush ), Saint John's Scyte, Grigoriou (Grigoriat), Saint. Anna Scyte.

Thinking about why he has no peace during all this time, but always moving from place to place, he came to the conclusion that this is a punishment from God for his denial of the Christian faith.

So he came up with the idea of ​​martyrdom (as a mean to redeem his sin) and shared it with some clergy: no one dared to recommend a martyrdom to him because of his youth.
But in the end, seeing his unwavering determination, the priest Ananias gave him a cell rule in preparation for martyrdom for Christ. Then the clergyman Visarion cut his hair in a Great Schema " μεγαλόσχημος" monastic vows and went with him to the island of Mytilene (today in Greece).

After partaking in the Holy Mysteries of Christ, St. Luke dressed as a Turk and went to the Qadi (Judge – qadis have been an institution in cities in Turkish empire pretty much like today's Courts).

He told allegorically how he was forcibly converted to Islam, openly renounced ungodly Islam and professed the Christian faith in the following way:

He went beforte the kadi and asked him in loud voice,

"Is it just for me to be deceived, a child like myself?"

The kadi asked,
"And who deceived you?"

"Someone deceive me, giving me a badge of islam [meaning circumcision."

The kadi then asked to see the badge. But when Luke went to open his clothing, those
present in the courthouse finally understood what he meant and shouted for him to stop.

"Being a young child of thirteen, I was deceived by you
and I came over to your religion, not being able to discern
the truth from falsehood. I therefore remained
with what is false and a lie for some time because I
understood your religion was not true, but false.
And he whom you call a prophet is not a prophet but a
deceiver and a mythmaker, and he has deceived all of
you and you believed him . Having therefore been
informed that your religion is darknes, I reject
it before you and I confess my former Christian faith
which is true light. I believe and worship a true God,
my Lord Jesus Christ who will come to judge all
the world, the living and the ded, and who will render to
each according to his works. If you do not believe in
HIm. as I do, you will all be damned."


The kadi further asked Luka where he is from and he said he has came to this place by ship from Russia as Russia has been considered the only country protectorof Orthodox Christians in the empire and
wanting to protect his relatives and the Church hierarchy in the Empire from from further beating or destructions of Churches and arrests of Orthodox Priests and clergy within the empire by the turks.

He further asked:
"Where are you staying?"

"Nowhere. I did not stop anywhere, but came straight here."

The kadi turned to the others in court and said,

"He is crazy. See if he recognized his own shoes."

Luka turned and immediately rushed to find his shoes and showed them
to the kadi and said,

"I am not crazy, as you say. Here are my shoes. I brought them in Constantinople."

The kadi said,
"I am sorry for you son.
If you do not listen to me,
you will suffer many torments, many of which
you have not even heard. So think well."

"I have already though on all the torments which you
can inflict on me, and I have come. So, whatever you
plan to do to me, do it quickly, without delay, and be
assured that I am clean and blameless and I will not deny
my faith. I am an Orthodox Christian and I will die an
Orthodox Christian. I worship Christ and it is Christ
whom I desire. I confess him here where I once
denied Him in ignorance and I proclaim Him with true knowledge."

All Bulgarian Saints icon, Christ in Glory surrounded by
Bulgarian saints – below Christ throne – Saint King Boris the Baptizer
and Saint Patriarch Euthimius, the monastery on the Bottom Rila Monastery
The first by importance and Largest Monastery in Bulgaria, Saint Loukas of Adreanopolis
is also commemorated on this date too

Neither the caresses and promises of the Muslims nor the threats of torture could shake the hard young man in his determination to die for Christ. The Turks beat him severely and threw him in prison, shackling his legs. At that time all the churches were praying for the martyr.
The Metropolitan of the island and the Elder Visarion managed beseech to send him to prison the Holy Mysteries of Christ for the last communion.
Finally, the judge saw Luke's unwavering firmness and sentenced him to death by hanging.
When the executioner hoped for the noose around his neck, he said,
"Confess Muhammad, our great prophet, and we will let you go!"

"I believe in my Lord Jesus Christ and I worship Him alone!"

The holy body of the martyr remained hanging on the gallows for three days, but during all this time it remained white and beautiful, emitting an unusual fragrance.
After three days, the Turks tied a large stone around his neck and his body was thrown into the depths of the sea, but instead of sinking, it remained with the stone on the water surface. When night came, the Christians found him on the shore and handed him over to the earth with due honors. The other clothes of the Venerable Martyr received healing power and by touching them the sick received healing.


Let by the Holy Prayers of Saint Luka of Odrin, God quickly grant all People worldwide more peace, love, hope, faith and wisdom that are so desperately needed today !