Living of the saints: Saint Mihail ( Michael ) Warrior the Bulgarian venerated November 22 in the Church

Свети Михаил Saint Mihail (Michael) Voyn The Warrior  is known to be Bulgarian by blood origin.
He was born in the town of Potuk (it is assumed that this is today's Batak – the same region where just few years ago the Holy New Batak Martyrs about 1200 to 8000 people who suffered under the Ottoman Turks for Christ being collectively killed in the Church of Saint Nedely in Batak on the night of 2nd of May 1876 AD and were canonized in the Church just few years ago from now). 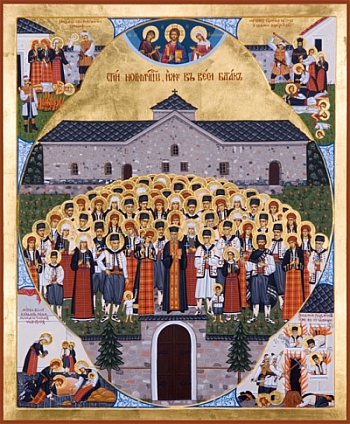 He probably lived in the time of the pious Bulgarian king Saint Boris-Mihail (King Boris – Michael the Ist known as the the Baptizer of Bulgaria, thanks to whose decision to receive Christianit and mass baptize of the Bulgarian nation and territories of his large country and his active work and financement to support the pupils of Saint Cyril and Methodius such as Saint Kliment Ohridski, st. Naum, st. Gorazd, st. Savva, st. Angelarius and the other many uknown holy man the Old Bulgarian cyrillic church books was translated from Greek and  shortly later other Slavonic nations could received the Church service Books in Old Bulgarian cyrillic whose slightly modified version in the 16th century become the famous Church slavonic language, which is used to these day in the Slavonic churches.

Saint Mahail the Warrior was the son of rich and noble parents, loved the pure life from childhood, had the fear of God, devoted himself to prayer and fasting, generously gave alms to the poor, which is why both his parents and strangers called him "the holy child".

When he was 25 years old, he was appointed the commander of a troppers unit in the Byzantine army.
At that time of living, his birth region even though having people inhabited with Bulgarians, had not yet entered the borders of the Bulgarian state.

In a war of the Byzantine emperor Michael III (865) against the Agarians (later known as the Ottoman Turks), Saint Michael the Warrior was left by the frightened Greeks alone with his subordinate warrior mates who followed his heroism.

Invoking the name of God like the ancient saint all the while, he managed to drive away the enemies and together with the soldiers remained unharmed.

Returning home, he performed the heroic miracle same as of Saint Great Martyr George the Victorious:

He killed a huge dragon that came out of some lake, and thus saved a virgin from being eaten by it.
But the dragon whose head he cut off struck him with its huge tail so hard that he fell down and lay unconscious for some time.

Soon after his return to his native place, he died and the Lord glorified him with incorruptible miracles.

During the Second Bulgarian Kingdom, at the very beginning of the 13th century (in year 1206), the Bulgarian king Kaloyan solemnly brought his holy relics to his Capital Tarnovo and laid them in the Patriarchal Cathedral at that time dedicated to the "Holy Ascension".

After the fall of capital of Bulgaria Tarnovo under Ottoman rule in (year 1393), the traces of the saint holy relics were lost.

The great patriarch of Tarnov (Trnovo), St. Euthymius, compiled a biography of him, which has been preserved to this day and which is the main source for us to know about the saint.

Extract From: Lives of the Saints, Synodal Publishing House, Sofia, 1991, edited by Parthenius, Bishop of Levki, and Archimandrite Dr. Athanasius (Bonchev) with minor inclusions of the author of article Hip0

Author Notes: The story with Saint George Killing the Dragon, as being found mostly in medieval sources has been largely disputed by Theologians on its authenticity as the story originates from the 11th century A.D. with an oldest source for the tale being a Georgian Manuscript. In the 12th century saint George Killing the Dragon tradition has been already well known by the Western Christians. The theologians claim the story stems out of a living of saint Thedore Tiro ( Tiron ), who was very venerated and well known in Bulgaria. That would make some doubt in the authenticity of the story of both Saint George Killing the Dragon and might make them doubt that the story of Saint Mihail  (Michael) The Bulgarian Warrior is being taken from the saint George popular legends of the 11th century. However as a source of the original living for saint Mikhael has been saint Patriarch Eutymous of Tarnov (one of the most educated man of his time), who has been also the last Bulgarian patriarch before the fallout of Bulgaria under the Ottoman Turks in the year 1396 and a spiritual father and teacher of Hesychasm and  many of the Spiritual man such as Gregory Tsamblak and saint Cyprian Metropolitan of Kiev and all Russia ( 1390 – 1407 ) and many other famous copyist and enlightened people who moved out the Church service books and spiritual treasures of the Bulgarian Church as well as many holy miracle making icons and Christian art far in today's lands of Romania, Ukraine, and Russia, it is very less likely that the living of saint Mihail the warrior was compiled, based on false legends, especially by considering the fact that saint Mihael the Warrior lived only 3 centuries away from the moment in which his official spoken living was written down by saint Patriarch Eutymuous. Perhaps there is a Greek sources we don't know who was also the basis of st. Patriarch Eutymuous biography of saint Michael. The story of dragons and beasts tormenting people and regions has been common in medieval times, sometimes their real meating is interpreted by todays Theologians to be just an allegory to demonstrate the spiritual fight a certain saint has led with the originator of evil satan who as said in the holy scripture constantly fights against christians the Church and everything that is good and pleasant with the goal to destroy and kill. Other sources however such as Holy Mount Athos even by today has manuscripts written by monks of that time about the existence of large snakes and dragons who has been tormenting people and regions. We all know the numerous stories with Princesses and Dragons, but it seems these stories are based on monks testimonies about the reality of these things and later perhaps improved by people's imagination and desire of man put some difference in his every day monotonic life.
Thus some more conservative Theologians nowadays believe it is possible for such a large dragons and snakes to have existed and been conquered for real by saints, though we should keep in mind that some of the stories of the livings of medieval times has been including details, that were result of the personal imagionation of the author.

Let by the Holy Prayers of Saint Mihail The Warrior (Bulgarian) the world finds more love, peace and goodness !
Holy Father Mihail Warrior pray for us !