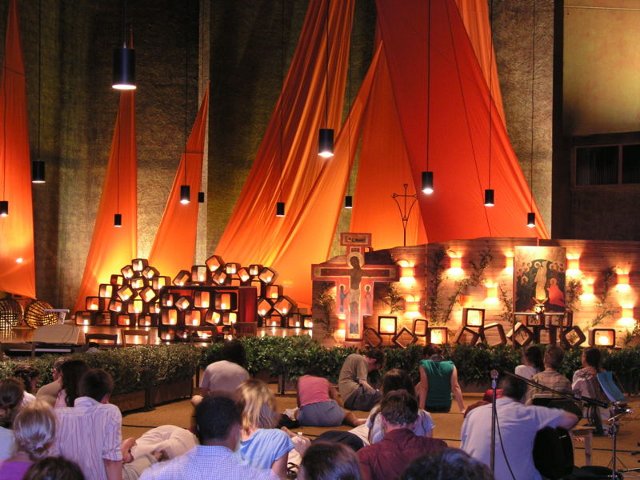 Ecumenism or oecumenism is a movemend that aims at bringing greater Christian Unity around the Churches and the world religions under “one faith”.

The basic idea behind that movement was to unite All Churches nomatter of their basic beliefs and practices within them.
Otherly said it’s trying to unite the Roman Catholic Church with Orthodox Church and the rest of Christian protestant faiths and denominations.
Historically this kind of movement has been existent for quite long, however the speed and scale it shapes today is something bizarre to the ecumenism movements that were before.
Simple said ecumenists are trying to create one United Church from all the existent Churches.

Of course on the first glimpse this sounds very tempting, especially if we consider that after the Great Church Schism (Where Roman Catholic Church split from the Orthodox Church) and consequently the emerging dozens and thousands of Churches as a result of the protestant schisms with Roman Catholics took place.
Today the Christian world is actually very divided and though most protestant denomination Churches claim they believe in Christ most of the prtestant Churches(denominations) practically confesses more or less different doctrine than the basic Doctrines of Orthodoxy or Catholicism.

For those that are aware of the exact reasons for the Great Schism , it’s clear that the reasons fot the Church split has basicly two dimensions one was the Changing patterns of basic Church beliefs that Roman Catholics has decided to include in the basic Church doctrine and the other a bit less important but still present was the political fight between the Western and the Eastern Church.
However it’s pretty clear that the Church split and the different Church life that the Western and Eastern Church led through the 956 years of division has made the two Churches very different in many senses.
Catholics changed the ancient Nicene creed of Faith
They took the Pope as an representative of Christ on Earth, they went at times after philosophic movenets like rationalism integrating it into Church life.
And changed various aspects of the Church order more or less to “adjust” so to say Christianity to the changing times.

The whole ecomenism movement is very complicated and man needs to read a lot before he gets the real picture.
Nevertheless the basics behind I’ve already mentioned, The Roman Catholic Church is making serious attempts to create unity between Churches.
They do have their Holy Liturgy (Masses) in cooperation with Protestant Churches, they do organize events inviting all kind of Church representatives all over the world and try to create cohesion between the Churches.
Of course the Pope is a very main figure in the heretical meetings that Ecumenists have.
On that “union meetings”, all kind of practices known to either Protestant Church denominations and Roman Catholics as well as Orthodox Church practices are combined into a very mixed heretical “church service”.
Of course everybody attending that kind of event is supposed to venerate the Pope as the person who holds the most power and the last word on the ecumenstic summmonings.

What is really pity that even a lot of Orthodox Churches as well as Orthodox Church representatives go to that heretical ungodly meetings and does light candles with the heretics or participate in heretical prayers.
This of course is strongly prohibited by both Orhotox Church canons and the Orthodox Church tradition.
There are also some Orthodox Church holy fathers, who had the gift of clairvoyance and did prophecised about this kind of events occuring and strongly warned Orthodox Christians to stay away from taking participation in heretical gatherings.
It’s even against the Orthodox Church teachings, that teaches that only within the body of the Church man can achieve salvation, through the teaching testaments of our Lord and Saviour Jesus Christ and the Holy Apostles, Martyrs and Fathers!

Having all this it’s pretty clear that Ecumenical meetings are not just meetings but they’re a place where a new kind of religion gets shapes.
A religion which includes the approaches of each and every church for spiritual enlightenment and getting drawing near to God.

It should be clear by all said that this kind of Ecumenical meetings are actually a spiritual babylon.
That the truly faithful to God should stay away. It’s very pity that many people who are currently priests in different orthodox churches, even metropolitans and patriarchs has already ecumenic ideas implied and are very willing for the ecumenism to progress.
Therefore there are internal Orthodox Church processes that happen this days which slowly but surely try to navigate the Orthodox Church body to join and take actice parcipation in ecumenism and in that way betray the dozens of generations of Holy people who even gave their lives to keep the faith clean from external stain and heresies.

The topic of Ecumenism is really an extending one, however I’ll stop here and just show you a few videos.
Then it’s up to you to decide if it’s an apostacy of our faith or not.
If you’re supporting the globalism ideas then you might be happy with ecumenism,I personally am against globalism so it was awful to see this kind of betrayal of the teachings of our Lord and Saviour Jesus Christ…

If you have watched the video snapshots from the Ecumenical meetings you should be already aware that in this meetings Indians, Hindus, Buddhists and other completely un-christian religious groups participated.
It’s terrible to see how an Orthodox Bishops does kiss the pope’s hand even though they’re not under the Pope’s Jurisdiction at all.

This entry was posted on Monday, October 18th, 2010 at 2:52 pm and is filed under Christianity. You can follow any responses to this entry through the RSS 2.0 feed.You can leave a response, or trackback from your own site.