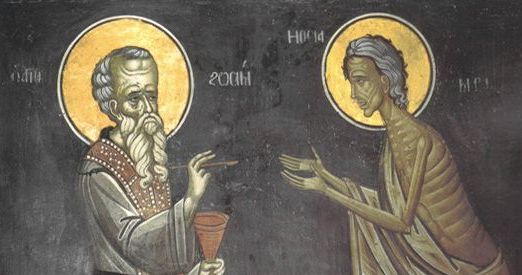 Saint Mary of Egypt  ( Ϯⲁⲅⲓⲁ Ⲙⲁⲣⲓⲁ Ⲛⲣⲉⲙⲛ̀ⲭⲏⲙⲓ Света Мария Египетска ) lived either in the distant year 530 Anno Dommini (After Christ).
She was born in Egypt, notable for its great help and example model for penitence and everyone that is the painful but soul cleaning process of repentance.

Saint Mary was an ordinary person, who ran away from her parents in the age of 12 fleeing from Egypt to Alexandria. Like every young person whose blood wants a lot of enjoyment and new things, spend her teenage years until the age of 29 becoming a harlot leading a life filled with all kind of worldly enjoyment with a noisy companies, with the usual Drinking nights, the sexual immorality sweetness deeds.

She was spinning flax to make her daily living and often begging on the streets but together with that she had an insatiable and an irrepressible passion for lust offering sexual favors to many strangers during her countless night adventures of voluptuousness.

In her Vita (Biography), it is described she often refused the offered money for her sexual favours, even though her night partners offered her money being very satistfies with this wild lady …

After 17 years spend in this "notorious" harlot lifestyle well reassembling the modern pop and holiday stars, at the age of 29, she decided to make a far travel (perhaps out of boredom) from Alexandria to Jerusalem for the feast of the Exaltation of the Holy Cross. Her motive to travel in a ship filled with pilgrimage Christians was unclean, like her lifestyle, The Vita says she thought, "Perhaps there in Jerusalem she can have even more partners she can fornicate with to satisfy her uncontrolled lust.".
As she was a homeless and poor woman to pay her pilgrimage, to pay the very expensive for the time ship passage ticket by offering sexual favors to other pilgrims.
And  continued her habitual lifestyle for a short time after arrival in Jerusalem.

In Jerusalem Mary tried to Enter the Church of Holy Sepulchre where Christ Resurrected from the Death, together with the crowds of people entering the temple for pilgrimage out worldly interest but an unseen power has kept her at the front gates of the Temple. At first she thougth this is due to the Many people who were also trying to enter the Church and she tried another time, but the same happened, she couldn't move the empty space of the entrance like there was an invisible barrier preventing her to move in. A sudden remorse, pain and understanding about her impurity and sinfullness filled her with unbearable remorse …

Mary looked up the front door and saw the common icon of the Mother of God Theotokos hanging on the top and she decided to pray this unearthly beautiful never seen lady to forgive her impurity and help her enter the Church. After her short fervent warm prayer in which she promised to leave the world and become an ascetic if she is permitted to enter the Church. After which she tried another time and could enter the Church and following the long queue venerated the relic of the True Cross where the Crucifix of Christ. 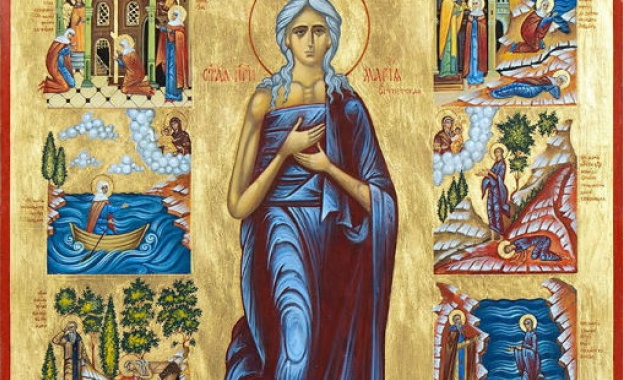 On her way out she looked at the same icon on the top of the Entrance Door and Give thanks to the Theotokos and heard voice, telling her, "If you cross Jordan River, you will find a grorious rest". Amazed by the miracle, she immediately went to the Sant John the Baptist monastery on the Bank of Jordan River for which she has heard earlier confessed her sins in front of monastic priest  and received the Holy Communion.
On next morning following the prescription of the Virgn Mary's voice heard earlier crossed Jordan and started her angel like life in desert solitude as a hermit to spend 47 years in deep penitence, from which she had spend 17 years of unceasing fight.


She took with her only 3 loaves of bread and once over she lived on what she can find in the desert.

Approximately one year before her death, a wandering monk priest father who was crossing the desert, hoping to find a holier person than himself …

To humble his high self esteem God has given him to meet by his great providence the hermit spirutual mother.
At first he thought he is meeting a beast or an Angel as the body of Great spiritual mother was completely naked and almost unrecognizable as human from the inter severe fasting and Mary was hiding from his clothes has dissolved by the sun and the high amplitude temperatures over the many years spend in desert.

Zosimas who was at the age of 53 himself being in monks schima and had a long years of spiritual endurance amazed by the seen "ghost"-like bowed in front of the Angel equal hermit and asked her prayers and desired to ask her about spiritual things.

She asked Zosimas to toss her his mantle to cover herself with, and then she narrated her life's story to him.
After the short conversation, he was amazed by the many details regarding spiritual knowledge and the knowledge of the holy scriptures the hermit mother had (she was freely quoting parts of the Holy Bible Scriptures by heart, even though she spend 47 years in desert and never had books, neither could read !

She asked him to meet her at the banks of the Jordan, on Holy Thursday of the following year, and bring her Holy Communion. When he fulfilled her wish, she crossed the river to get to him by Walking on the surface of the water – just like Jesus Christ is described to Walk on the Water in the Scriptures.  The great Hermit Mother received Holy Communion, telling him to meet her again in the desert the following Lent to bury her body. 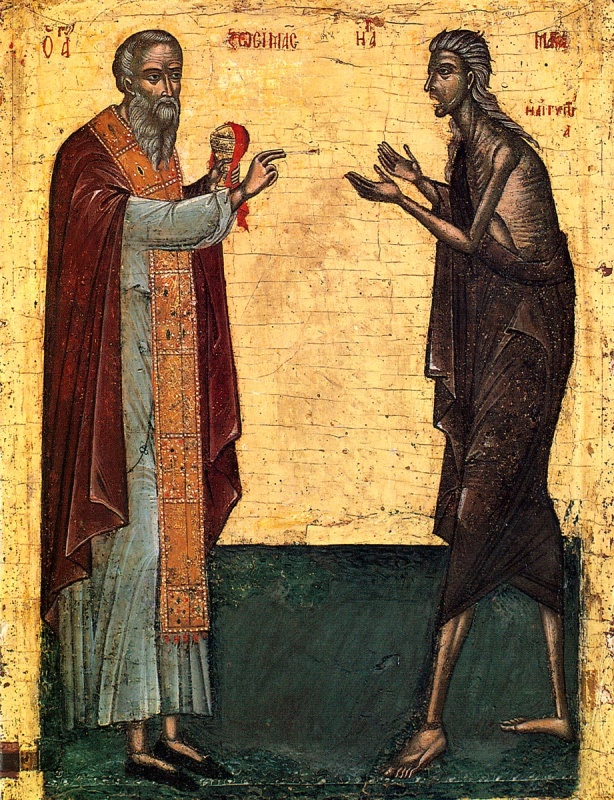 The next year, Zosimas travelled to the same spot where he first met her, some twenty days' journey from his monastery, and found her lying body there dead incorruptable and intact just like prophecised by the saint.
According to the long Vitae of the saint a miracle happened in front of the eyes of the stoned to death Zosima as a lion come out of the desert and dig a grave for the saint. 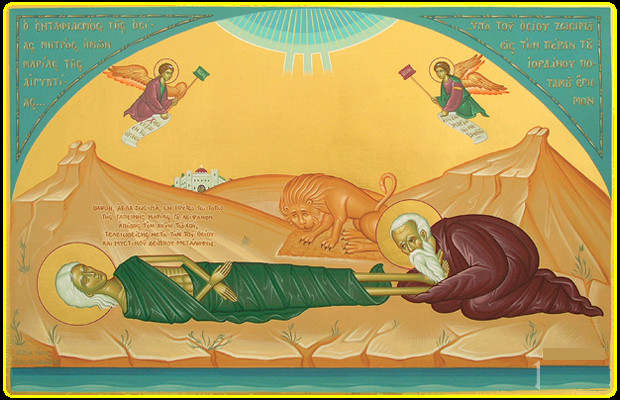 According to an inscription written in the sand next to her head, she had died on the very night he had given her The Blood and Flesh of Christ (Holy Communition) and had been somehow miraculously transported to the place he found her, and her body was preserved incorrupt for that long time till her death. He buried her body with the assistance of a passing lion. On returning to the monastery he related her life story to the brethren, and it was preserved among them as oral tradition until it was written down by St. Sophronius, the Patriarch of Jerusalem (634–638).

Saint Mary of Egypt feast day is kept by the Orthodox according to the Fixed Cycle on April 1. On the Moveable Cycle, the Orthodox Church also commemorates her on the fifth Sunday of Great Lent on which day it is customary for the priest to bless dried fruit after the Divine Liturgy.
The Life of St Mary, by Saint Sophronius, is appointed to be read during the Matins of the Great Canon of Saint Andrew of Crete on the preceding Thursday.

Here is the Church troparion and kontaktion verses:

Troparion — Tone 8
The image of God was truly preserved in you, mother, / for you took up the Cross and followed Christ. / By so doing, you taught us to disregard the flesh, for it passes away, / but to care instead for the soul, since it is immortal. / Therefore your spirit, holy mother Mary, Rejoices with the angels!

Kontakion — Tone 3
Having been a sinful woman, / you became through repentance a Bride of Christ. / Having attained angelic life, / you defeated demons with the weapon of the Cross. / Therefore, most glorious Mary, you are a Bride of the Kingdom!

Holy Mother Mary of Egypt pray the Lord to have mercy on us the sinners!

This entry was posted on Thursday, April 2nd, 2020 at 1:19 am and is filed under Christianity. You can follow any responses to this entry through the RSS 2.0 feed. You can leave a response, or trackback from your own site.