Christ is Risen ! Truly He is Risen ! The origin of the tradition Paschal Greeting and Coloring of Eggs on Easter Holidays in the Church

The Easter Eggs are so famous today for the kids worldwide, even though the world does not put much accent on the feast of Pascha (Easter). All kind of colored eggs are to be find in stores, many christian countries both Western and Eastern all throughout the world have the tradition of coloring eggs for Easter.
The tradition is also the same here in Orthodox Bulgaria, as we have the tradition to boil and color eggs in various colors.
Usually the first egg is colored in Dark Red and once sanctified in the Church is put on the iconostasis (the prayer corner in the house) in front of Christ, Virgin Mary and saints icons and kept their until next year.

Miraculously this Egg usually does not start decaying or smelling as an ordinary egg will do if left out of the fridge for a month or so. This first egg in dedication and memory of Christ's resurrection is kept on the iconostasis until the next year's Pascha and then buried somewhere in a green clean place for sanctification of the land.

This is a good and well followed tradition for those strict about religion, but even those who did not strictly follow Christianity or orthodoxy do color eggs for the fun of kids and as an expression for joy of the Paschal feast. Both grown and kids then try out their forces whose egg is more powerful by knocking each other's eggs to test whose egg shell is more solid and can stand up the break. The egg that is "victorious" once people test their power that is stronger and withstand the "egg fight" is kept for another egg duel with another person.

According to old superstitious belief if you win over in an eggs fight this is interpteted as you will have a good health and well being for the upcoming period till next year's Pascha.

How and from wherein this Boiled Eggs coloring originated ?


The short answer is it is connected to one of Church's traditions about the poor apostle Equal Saint Mary ( Maria ) Magdalene, who have given as a gift to Roman emperor Tiberius an Egg with the All Famous Greeting dialog in the Orthodox Churches among people with person A saying:   Christ is Risen ! person B responding: Truly he is Risen! (Христос Воскресе Войстину Воскресе !)

From the time of the many appearances of the Savior Christ in flesh after his Glorious Resurrection described by the Holy Evangelists in the Gospels and the fervent sermon of St. Mary Magdalene (one of the of the so called Myrrh- Bearing Woman who were the first who have visited the tomb where Dead body of Christ was led and become witnesses of  the Resurrection). The surviving Bible's New Testament 4 Gospel books do not provide further details about the activities of St. Mary Magdalene and her life. The Church mouth-by -mouth tradition of her later life in several local Christian churches differ slightlyhowever everywhere they essentially report on the zealous co-apostolic activity of St. Mary Magdalene. And the differences between these traditions depend on which of the evangelical women these churches understand by the name of St. Mary Magdalene.

Some Western Christian churches, as well as the Church Fathers and learned theologians, unite in one or two personalities three evangelical women: the sinner who repented in the house of Simon the Pharisee, shed tears at the Savior Christ's feet, wiped them with her hair. and she anointed them with precious ointment, and Mary of Bithynia, sister of Lazarus of Bythynia ( resurrected in the fourth day after death by Chrsit and commemorated one day before Palm Sunday )' and Mary Magdalene, who was delivered from the Savior Christ by seven demons. But the Orthodox Church now, as before, recognizes those mentioned in the Gospels with different signs, three persons as different separate ones, and does not want to base historical information on arbitrary, plausible interpretations. Therefore, the tradition of the Orthodox Church states that after the Gospel appearances of the Risen Christ before His Ascension and after, St. Mary Magdalene resided with the Blessed Virgin and the Apostles and was an active helper of the first successes of spreading the Christian faith first in Jerusalem. But full of zeal, fervent faith, and zealous love for God's gospel, she then preached in other lands, proclaiming everywhere the heavenly grace, joy, and salvation of all who believed in the Savior of the world, the Risen Christ.

While visiting Italy to preach, St. Mary Magdalene found an opportunity to appear before the then-reigning Emperor Tiberius I, and presented him, according to generally accepted Eastern custom, with an egg painted red and greated him with "Christ is risen!"

The modesty of the gift of Mary Magdalene did not surprise the emperor, because he knew the ancient custom of the East, also among the Jews, going for the first time to superiors, or on solemn occasions to acquaintances or patrons, to offer a gift of honor, with some known or special, symbolic meaning. Examples of this can be found in Jewish Old Testament history, as are the gifts presented by the rich Wise men (magis – today their relics are kept for veneration in Cathedral of Cologne Germany) to the born Jesus Christ in Bethlehem of Judea. Even the poor in such cases offered as a gift various fruits from their locality or eggs from birds. Thus, partly following this ancient custom and with the red color of the egg laid and with the hitherto unheard words "Christ is risen!" to arouse the curiosity of the suspicious Emperor Tiberius. The holy co-apostle Mary Magdalene, by explaining the significance of this gift, began her fervent sermon on the Resurrection truth and the teachings of the Savior Christ for salvation. With great inspiration and conviction she told the emperor about the life, miracles, crucifixion and resurrection of Jesus Christ according to his own prophecy. She gave a direct, simple-minded account of the extremely unjust, biased judgment of Jesus Christ by the embittered members of the Jerusalem Sanhedrin. governor of Judea Pilate of Pontus, in condemning Jesus Christ to crucifixion. She explained how all this incurred the wrath of the Roman emperor then and how Tiberius handed them over to a court in which Pilate was deprived of power and exiled to Gaul, in the city of Vienna, where, according to legend, tormented by remorse and despair, he killed himself. According to another legend, Pilate repented, turned to Christ in prayer, as a sign of which his head was accepted by an angel after being cut off.

According to Church tradition, the sisters of Lazarus Martha and Mary went to Italy with St. Mary Magdalene; and Pilate, learning of this and fearing the denunciation of his unlawful actions by the Christians, himself sent a message to the Emperor Tiberius about Jesus Christ, in which he testified to the virtuous life of Christ, the healing of all diseases and infirmities from Him, even for the resurrection of the dead and for His other great miracles. Pilate asserted that in examining the accusations of the Jews, he found no fault in Jesus Christ; he made great efforts to deliver Him from the hands of the troubled Jews, but failed to deliver Him and betrayed Jesus to their will because of the cries of the people and the rebellious accusation of the Jews against Pilate himself …

... as a witness, overwhelmed with fear, he told the emperor about everything that had happened to Jesus Christ, who became an object of faith as God … 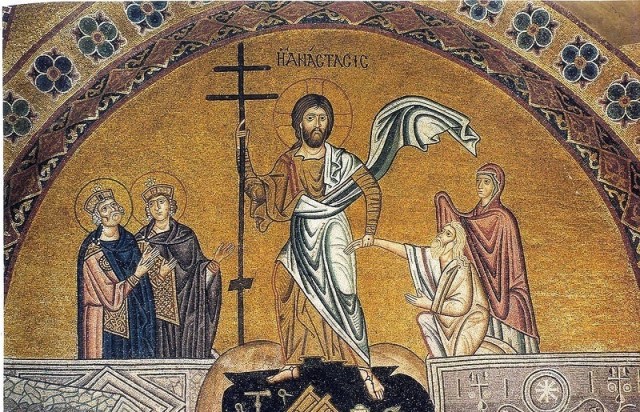 
And the Christians of that time, learning about the significance and strength of the impression caused by the offering of a red egg by Mary Magdalene to Emperor Tiberius with the words: "Christ is risen!" then began to imitate her in this and as a remembrance of Christ's Resurrection they began to give each other red eggs and say: "Christ is risen! … He is risen indeed! …"

Thus, this custom gradually spread everywhere and became universal for Christians around the world. In it, the egg serves as a symbol of Christ's resurrection and the resurrection of the dead, and of our expected new-birth for eternal bliss in the future life, the pledge for which is Christ's Resurrection.

Just as a bird is born from an egg and begins to live an independent life after its release from the shell, and the vast circle of life is revealed to it, so we, at the second coming of Christ to earth , rejected from ourselves together with the earthly body all that is mortal on earth.

By the power of Christ's Resurrection we will be resurrected and resurrected to another, higher, eternal, immortal life.

And the red color of the Easter egg reminds us that the redemption of mankind and our future new life have been acquired through the shedding of the cross on the pure blood of the Savior Christ.

Thus, the red egg serves to remind us of one of the most important dogmas of the Divine revealed Christian faith.

After the crucifixion of Jesus by the Jews in terrible miracles took place in nature, many dead righteous people rose, with His resurrection on the third day.Pilate, as a witness overwhelmed with great fear, informed the Caesar of all things that had happened to Jesus Christ.

In Eastern Orthodox Tradition Christ is Risen ! Truly he is Risen Greeting is used to joyfully great each other all around the Orthodox countries in the first 3 days of easter, and can be used instead of normal Hello greeting ! for the upcoming week The Holy Easter Weak which is a week of great joy and even by a hello greating in the Church could be used for 40 days as a normal greeting.

It is worthy to close this article with the praisal words, read on the first day of Pascha  authored by one of the most important Church fathers and
compiler of most served Liturgy service throughout the yearly service calendar:

This entry was posted on Wednesday, April 27th, 2022 at 6:16 pm and is filed under Christianity, Educational, Various. You can follow any responses to this entry through the RSS 2.0 feed. You can leave a response, or trackback from your own site.