Sunday of the Blind in Orthodox Church, 6th week after Easter (Passover) 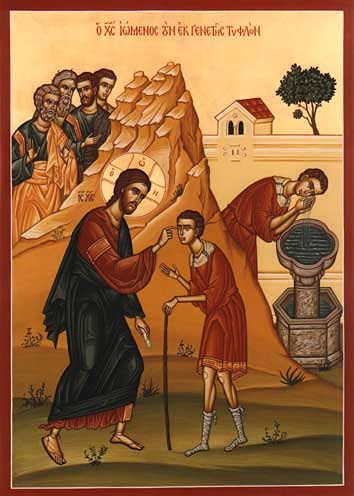 This Sunday I was to Church and part of our Gospel Reading that occurs on every Holy Liturgy in the Orthodox Church this time we had the following reading:

1 And as Jesus passed by, he saw a man which was blind from his birth.
2 And his disciples asked him, saying, Master, who did sin, this man, or his parents, that he was born blind?
3 Jesus answered, Neither hath this man sinned, nor his parents: but that the works of God should be made manifest in him.
4 I must work the works of him that sent me, while it is day: the night cometh, when no man can work.
5 As long as I am in the world, I am the light of the world.
6 When he had thus spoken, he spat on the ground, and made clay of the spittle, and he anointed the eyes of the blind man with the clay,
7 And said unto him, Go, wash in the pool of Siloam, (which is by interpretation, Sent.) He went his way therefore, and washed, and came seeing.
8 The neighbours therefore, and they which before had seen him that he was blind, said, Is not this he that sat and begged?
9 Some said, This is he: others said, He is like him: but he said, I am he.
10 Therefore said they unto him, How were thine eyes opened?
11 He answered and said, A man that is called Jesus made clay, and anointed mine eyes, and said unto me, Go to the pool of Siloam, and wash: and I went and washed, and I received sight.
12 Then said they unto him, Where is he? He said, I know not.

13 They brought to the Pharisees him that aforetime was blind.
14 And it was the sabbath day when Jesus made the clay, and opened his eyes.
15 Then again the Pharisees also asked him how he had received his sight. He said unto them, He put clay upon mine eyes, and I washed, and do see.
16 Therefore said some of the Pharisees, This man is not of God, because he keepeth not the sabbath day. Others said, How can a man that is a sinner do such miracles? And there was a division among them.
17 They say unto the blind man again, What sayest thou of him, that he hath opened thine eyes? He said, He is a prophet.

18 But the Jews did not believe concerning him, that he had been blind, and received his sight, until they called the parents of him that had received his sight.
19 And they asked them, saying, Is this your son, who ye say was born blind? how then doth he now see?
20 His parents answered them and said, We know that this is our son, and that he was born blind:
21 But by what means he now seeth, we know not; or who hath opened his eyes, we know not: he is of age; ask him: he shall speak for himself.
22 These words spake his parents, because they feared the Jews: for the Jews had agreed already, that if any man did confess that he was Christ, he should be put out of the synagogue.
23 Therefore said his parents, He is of age; ask him.

24 Then again called they the man that was blind, and said unto him, Give God the praise: we know that this man is a sinner.
25 He answered and said, Whether he be a sinner or no, I know not: one thing I know, that, whereas I was blind, now I see.
26 Then said they to him again, What did he to thee? how opened he thine eyes?
27 He answered them, I have told you already, and ye did not hear: wherefore would ye hear it again? will ye also be his disciples?
28 Then they reviled him, and said, Thou art his disciple; but we are Moses' disciples.
29 We know that God spake unto Moses: as for this fellow, we know not from whence he is.
30 The man answered and said unto them, Why herein is a marvellous thing, that ye know not from whence he is, and yet he hath opened mine eyes.
31 Now we know that God heareth not sinners: but if any man be a worshipper of God, and doeth his will, him he heareth.
32 Since the world began was it not heard that any man opened the eyes of one that was born blind.
33 If this man were not of God, he could do nothing.
34 They answered and said unto him, Thou wast altogether born in sins, and dost thou teach us? And they cast him out.

35 Jesus heard that they had cast him out; and when he had found him, he said unto him, Dost thou believe on the Son of God?
36 He answered and said, Who is he, Lord, that I might believe on him?
37 And Jesus said unto him, Thou hast both seen him, and it is he that talketh with thee.
38 And he said, Lord, I believe. And he worshipped him.
39 And Jesus said, For judgment I am come into this world, that they which see not might see; and that they which see might be made blind.
40 And some of the Pharisees which were with him heard these words, and said unto him, Are we blind also?
41 Jesus said unto them, If ye were blind, ye should have no sin: but now ye say, We see; therefore your sin remaineth.

As you read above the Lord Jesus Christ healed the blind-born person by which manifesting Himself as a True expectedMessiah The Saviour of the Lord a Prophet and a True and Only Begotten Son of God.

The words of God directly fought the great proudness of Jewish Pharsiee wise people (thinking that know the Law better than the Lord himself). Their selfishness and great self-conceit make their soul which was in a terrible state to suffer because their produness was insulted by the truthful words and they felt wounded. They rejected the Lords words with a question by which Jewish (people) and nowadays often non-believers and even christian manifested wrath, selfishness and even mockery with contempt.

Answering the Pharisee's questions, The Lord has depicted there spiritual state, which was the main reason for their question.

41 Jesus said unto them, If ye were blind, ye should have no sin: but now ye say, We see; therefore your sin remaineth.


The Pharisee's considered for spiritual seers,  in a highes level understandanding God, his laws covenant and respectively spiritual realm, so they did not need any further grown in God's knowledge, thus rejecting the true teaching which was taught by God himself.

False doctrines of this blind teachers are fruit of human proud and self-conceit.
The proud understand himself as a independent, self-sufficient and not like a God dependent creation, the earthly life as something eternal and death and eternity for unexisting.

For this people God's plan was something not existing but God was understood as the Jewish law false teachers understanding of right and wrong in a way they have associated the eternal God with the scriptures, idolizing scriptures and inverting their meaning giving them a completely different meaning to fulfill their own passions.

This people who were to be the jewish intelligentia have recognized the human reason for a world ruler.
All the thoughts of the flesh crawl the land, the human understanding to this carnal men is completely sacrificed to the earth in which he wants to arrange his life to be all time pleasure of sin.
In this empty and unreachable goal was forced all the  fleshly and spiritual powers of both pharisees and sadukees.

The Lord show them that the humbliness and remembrance of the dead should be the true lifely goal of man and it is  the humble-wisdom that gives an insight to eternity.

Achiving humble-Wisdom contradicts the wordly and strive for virtues and therefore it is not being considered worth for man and society material understanding of good and progress.
The one achiving spiritual knowledge understands himself as a tiny unimportant particle in a huge universe of things (generations, times, paste and future events of human history).

What the Lord Jesus Christ tried to point to this blind teachers is that only the Mind and heart of humble in contrasting to the proudness and high-minded people they were could accept God's Christian teaching and to all the time endeavor in achiving the christian virties.
The non-blind person sees and feels the great failure of (his mainly) and then all surrounding humanity fallen nature and because of this soul-pain and internal and desire for salvation and spiritual resurrection and restoration are ready to joyfully accept the Saviour Lord Jesus Christ.

Let us make from our heart a spiritual altar of God and there through our mind to sacrifice spiritual sacrifices of tenderness, repentance, confession, humble heartness (which God would not despise (Ps. 50:19) Amen

This entry was posted on Monday, May 18th, 2015 at 11:56 pm and is filed under Christianity, Curious Facts, Various. You can follow any responses to this entry through the RSS 2.0 feed. You can leave a response, or trackback from your own site.