7th of July The Feast of Saint Nedelya Kyriakia one of the most honored woman saints in Bulgarian Orthodox Church and few words of the history of Sofia Second biggest Cathedral Church St. Nedelya

Saint Nedelya is a major Cathedral in Sofia Bulgaria dedicated to an early Christian saint Kyriaki (martyred year 289 AD). It is is a second biggest Cathedral Church in Bulgaria and a place where they serve the Holy Liturgy daily. The Patriarch and most notable spiritual leaders of the Bulgarian orthodox church do hold services there regularly. 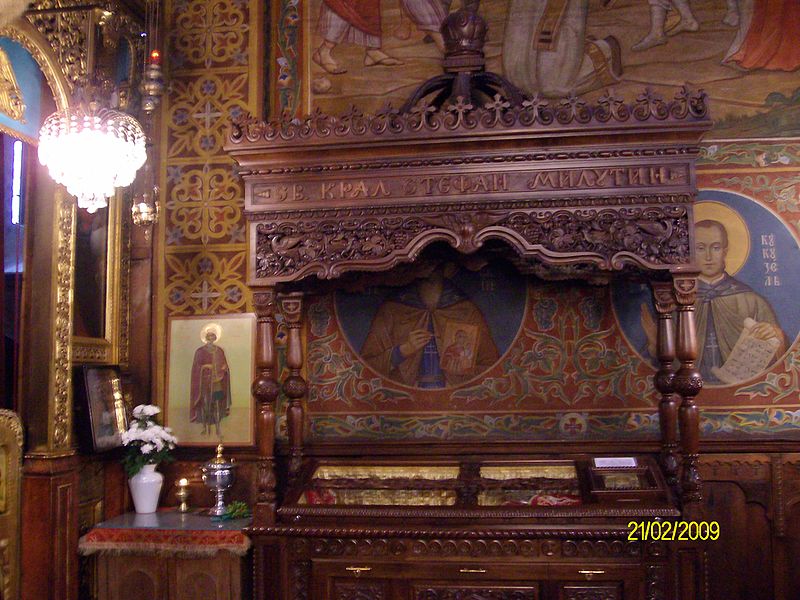 Saint Nedelya Church  is a beautiful peace of Christian art the Church is also known in XX-th century as Holy King (because the incorruptable Holy Relics of Sebian King Saint Stephan Urosh II ( Milutin ) are found in the Church). 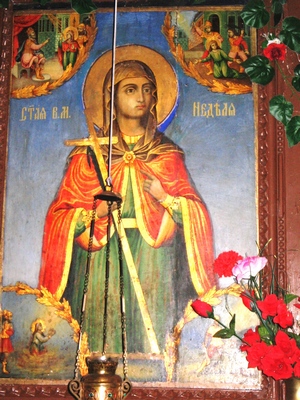 The fact that Saint Nedelya is the second Church by spiritual importance for Bulgaria is not a coincidence and this is related to the high veneration of saint martyr Nedelya (Kyriakia) Bulgarians had for the saint through the years especially in the Second Bulgarian kingdom during the reigh of King Asen's Dynasty (12-th 13-th century). The incorruptable Holy relics of the saint Kyriakia has been transferred to Trnovo (Tarnovo) the capital of Bulgaria at that time by saint Patriarch Euthymius (Evtimij) of Tarnovo (who was the last patriarch head of Bulgarian Orthodox Church during the Second Bulgarian Kingdom, right  before the fall of Bulgaria under the Turkish slavery (Yoke). 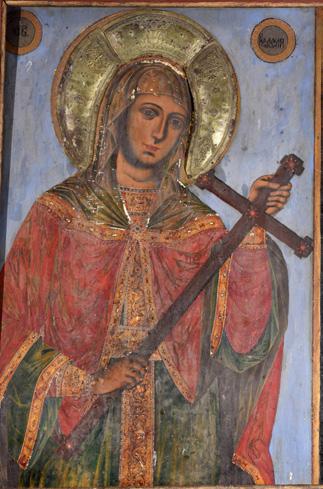 Inspired by the great deed and the great grace received by receiving the incorruptable relics of the saint, saint Euthymius wrote a glorofication called "Praise to the Holy Great Martyr (Nedelya)". The Nedelya word meaning in Bulgarian Language is Sunday and is a literal translation from Greek's Kyriaky. 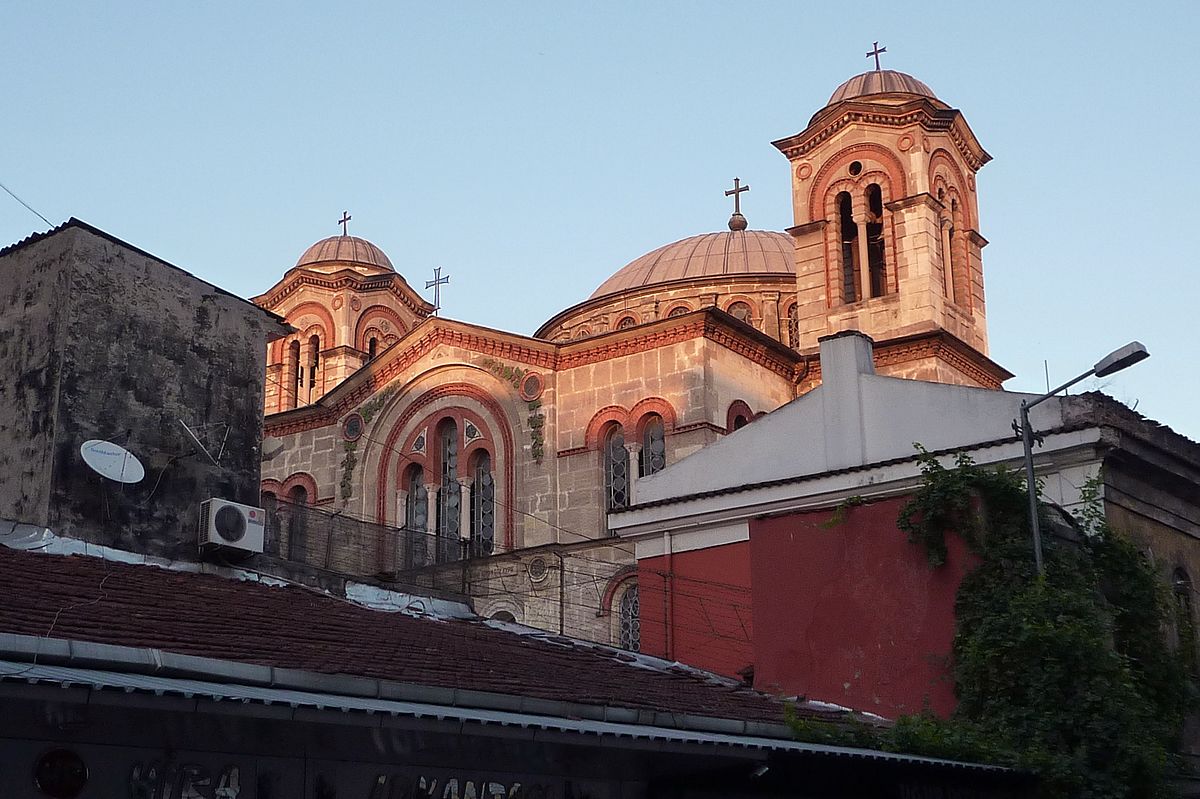 The veneration for saint Kyriaky has been quite common in medieval times one of the major Churches in Constantinople (today Istanbul) is dedicated also to saint Kyriaki.

According to Church tradition described by patriarch Evtimij, we know saint Nedelya has been born in Asia Minor and has been a child who has been long awaited kid that was gifted by God. Saint Kyriaki's was born in responce to her parents Dorotheus and Eusebia many fervent beseach prayers begging for a kid that will help Christ's salvation plan for the mankind.

She was brought up in the truths of Christ from an early age.

At a very young age, she decided to dedicate her life to God. She happened to live at the time before Saint Constantine The Great when still the ligth of Christianity did not yet overcome the false believes of paganism in the time of the peresuction by emperor Diocletian. This was the time of persecution against Christian confessors and brutal violence against Christians – they were persecuted, imprisoned, exiled or forced to renounce their faith. Nedelya was thrown into prison and tortured, and her parents were exiled to the town of Miletin. The miraculous healing of her wounds, as well as her refusal to worship pagan idols, led the authorities to sentence her to death as they believed she is doing her wonderful healing by some strange whichcraft.

Kyriaki was tortured again by Apollonius, the successor of Hilarion. She was thrown into a fire, but the flames were extinguished, and then to wild beasts, but they became tame and gentle. Apollonius then sentenced her to death by the sword. As she was given a little time to pray, she asked God to receive her soul and to remember those who honoured her martyrdom. Upon completing her prayer, she rendered her soul to God before the sword was lowered on her head. Pious Christians took her relics and buried them. At the time of her death, she was 21 years old.[

At her place of death, after prayer, Sunday surrendered her spirit to God before the sentence is carried out exactly on her feast date (July 7, 289). For early Christians the day of death or martyrdom was considered the date of the real birthday for eternal life in heve. Nedelya died at the age of 22, as saint Patriarch Euthymius of Trnovo writes, "Dying in a short time, she fulfilled long years, because her Lord's soul was satisfied, purity – great enough, feats enough …"

The Second Biggest Bulgarian Cathedral is dedicated to saint Nedelya 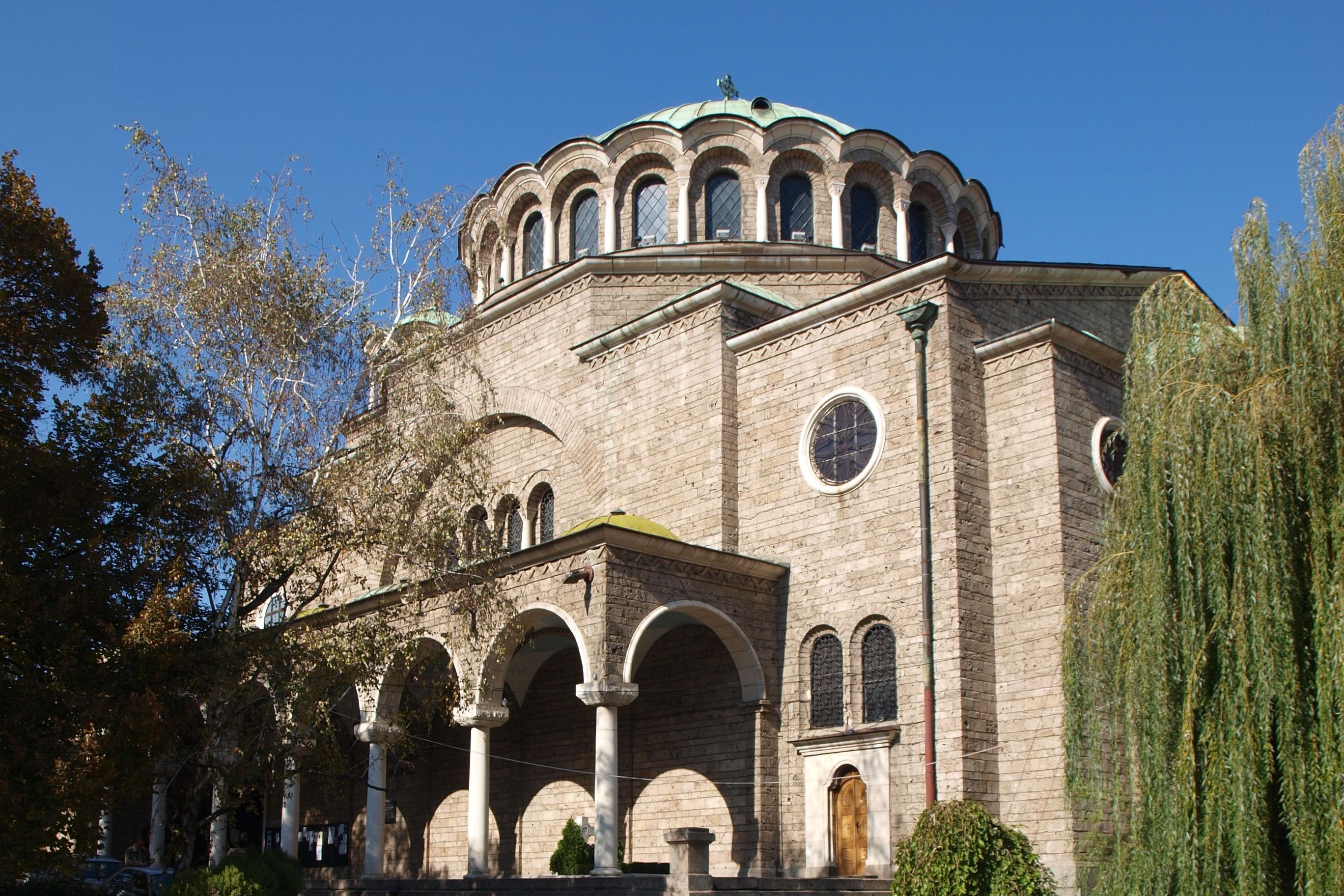 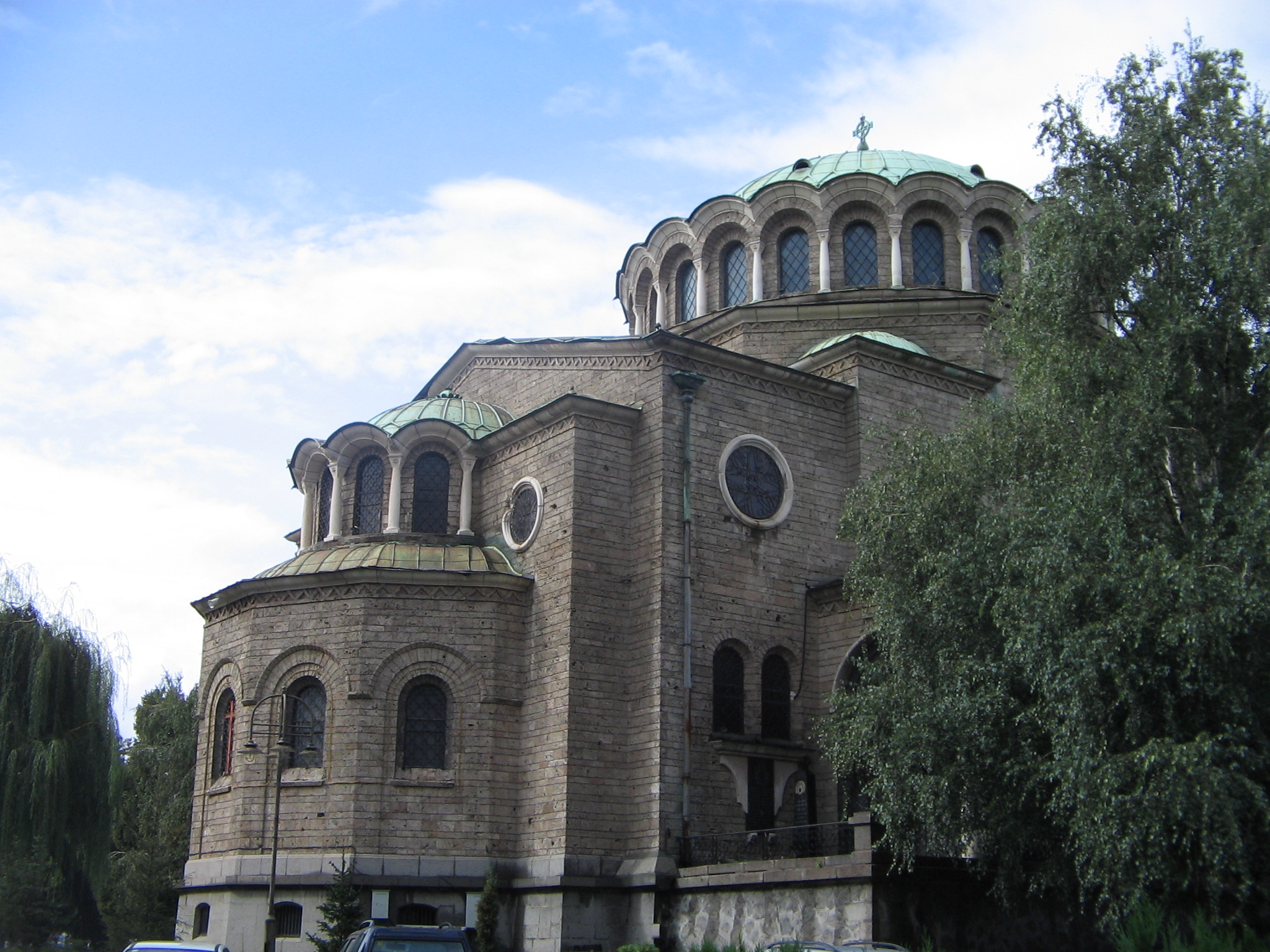 The church became famous during the assassination attempt by Bulgarian Communist Party (BCP / BKP) on April 16, 1925 during the funeral of General Konstantin Georgiev, when it was destroyed. Then on this sad date for the Bulgarian history, 193 people mainly from the country's political and military elite were killed and about 500  bystander believers, who attended the liturgy were injured. The assault was perhaps the worst terrorist act in the history of Bulgaria, and at that time in the world. The aim of the temple blowing assault was to kill King Boris III, who was not in the Church at the time because he was slightly late for the service by the providence.

After this bloody terrorist act of the Bulgarian Communist Party, the church board of trustees assigned the architectural bureau "Vasilyov – Tsolov" (architect Ivan Vasilyov and architect Dimitar Tsolov) the restoration of the church. Renovation began in June 1927. By the spring of 1933, an almost new, huge central-domed temple was built with a length of 30 meters, a width of 15.50 meters and a height of the dome of 31 meters. The surviving two-row gilded iconostasis has been returned to the temple.

The church was solemnly consecrated again on April 7, 1933. The fresco decoration was made from 1971 to 1973 by an artistic team led by Nikolai Rostovtsev. Around 2015, the Church iconography has been fully restored and is amazingly beautiful worthy to see, if you happen to visit Bulgaria. 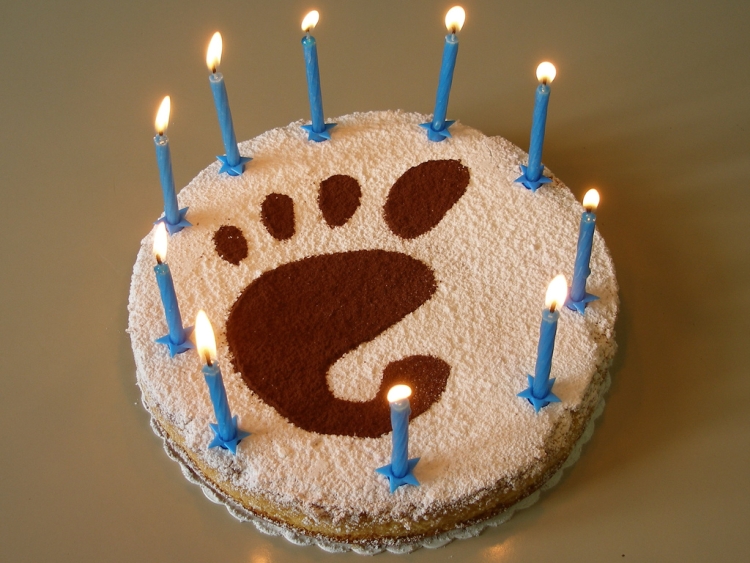 On 15 August one day before Debian Linux birthday and Debian manifesto announcement another important project for free software realm came to existence. On 15 Aug 1997 Miguel de Icaza, posted announcement explaining the major goals of the GNOME – GNOME Desktop project
The original announcement of GNOME Desktop Project can be read here
Last year GNOME has went through severe ups and downs, it was criticized and decredited by many of the true “believers” in the project because of the drastic turn the project does. Lest the ups and down, GNOME project is one of the most succesful free software project and in my view the most succesful FOSS software GUI.

Its interesting fact two major free software projects celebrate birthdays with 1 day difference. This makes August a major month for free softwar 🙂 As a long term Debian and GNOME user I felt obliged to drop few lines in thanks and congrats to GNOME which powers my desktop for 8 years already. 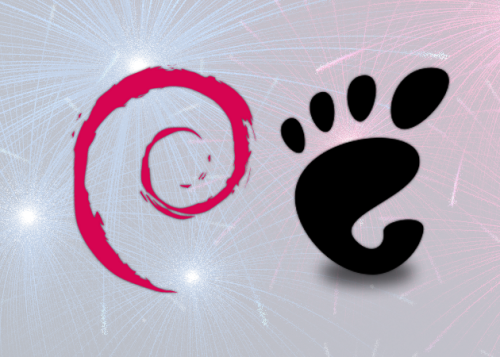 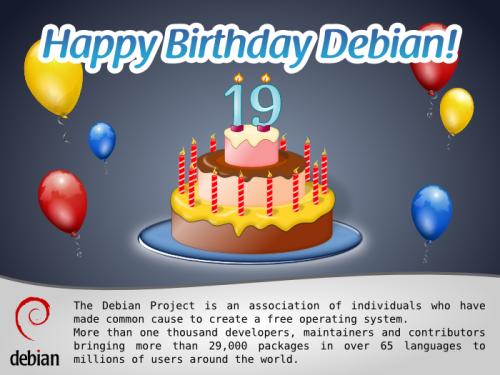 The distribution on which almost all main stream GNU / Linux distributions turned 19 years old.
20 years in active development and still up and running 🙂 Thumbs up for the Debian guys 🙂

Debian first release came out on 16 August 1993. The Debian philosophy and goals were outlined by the Debian distro “creator” Ian Murdock in Debian Manifesto. The original Debian manifesto is available for reading as part of Debian documentation in /usr/share/doc/debian/debian-manifesto
I’ve used almost all of available major Linux distributions but I haven’t found better than Debian or Debian based derivatives for both server and desktop installs. 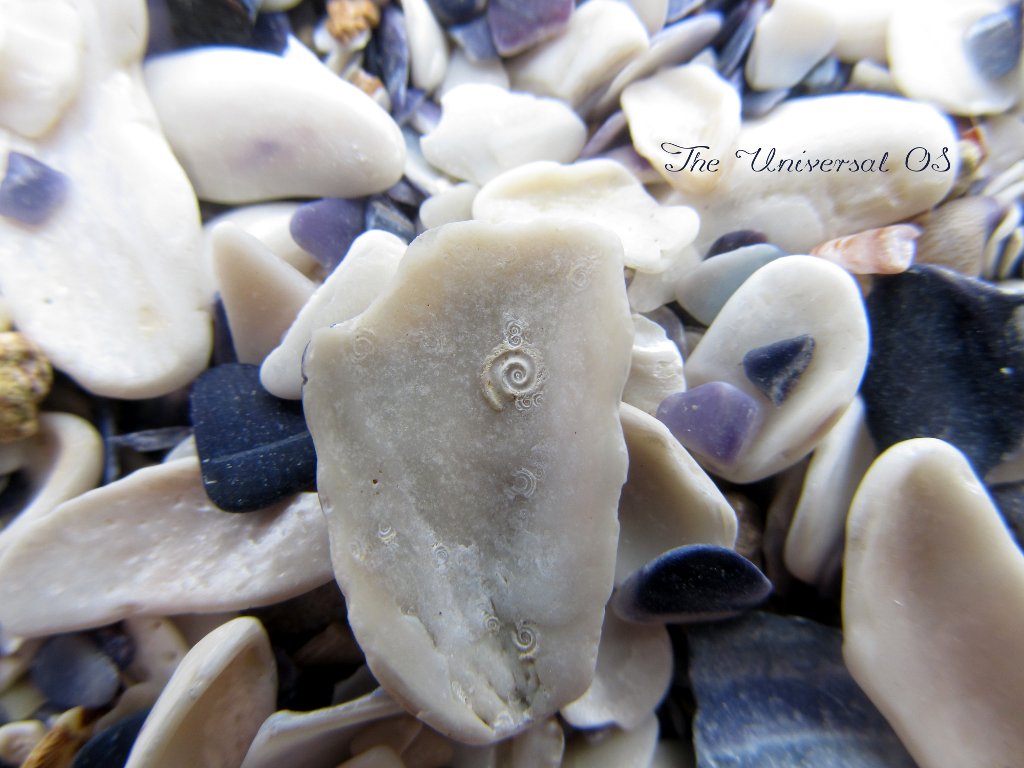 I’ve red there is a sort of tradition that Debian users celebrate each Debian anniversary with a huge cake eating parties. Unfortunately yesterday I was sick so I couldn’t enjoy deb’s birthday.

At Friday I, Zuio and Kiro (Kumcho Vylcho :). Went in the central park with a bottle of wine and 2l of beer. After the alcoholwas depleted Zuio suggested to buy 2 more bottles of wine. And we got very drunk it’s a miracle we are now fine.Yeterday I had a terrible headache. Yesterday I was on a birthday of Andon (Blackstar^) :). Tomorrow I haveexam in HRQM. I haven’t seriously studied yet. So I had to sit on my back and study.END—–

The day before yesterday, I was in a pretty bad mood and decided to went out. I went to the Mino’s coffee and accidently it happened that Geri a friend of mine had a birthday it was refreshing to spend some timewith real people even thought I thought about all’s behaviour and particularly “how hipocrity they are”.I drinked two glasses of wine for which Miro (Geri’s husband) said it smells like socks. Good heavens my nose was stalled. Yesterday I was out for a coffee with Lily :).

The weekend was a sort of peaceful.Servers and everything runs fine thanks to the Lord! (ofcourse). I’ll end the post with a quote fromthe bible through the small program called “verse”.

Here is the quote” “For the eyes of the LORD run to and fro throughout the whole earth, to show himself strong in the behalf of them whose heart is perfect toward him…” II Chronicles 16:9 :)END—–