Taking screenshots on Linux on major graphical environments and in terminal

I needed to make some screenshots for a E-marketing project I’m working currently on. So in that relation I took the time to do a quick research about nowadays Linux abilities of making a screenshot of either the screen or some screen element.

After spending some time reading articles explaining various ways on making screenshots I’ve finally built up a new article which incorporates many of the things I’ve red in different articles in one:

So this article I’ll explain about the most popular available tools you can use on Linux to make a screenshot of your screen or a screen element:

If you’re a gnome user like me you will probably appreaciate the default feature of Gnome which is pretty much similar to the support in Microsoft Windows of the Print Screen (PrtScr) button.

2. Taking an advanced screenshot on Linux with shutter 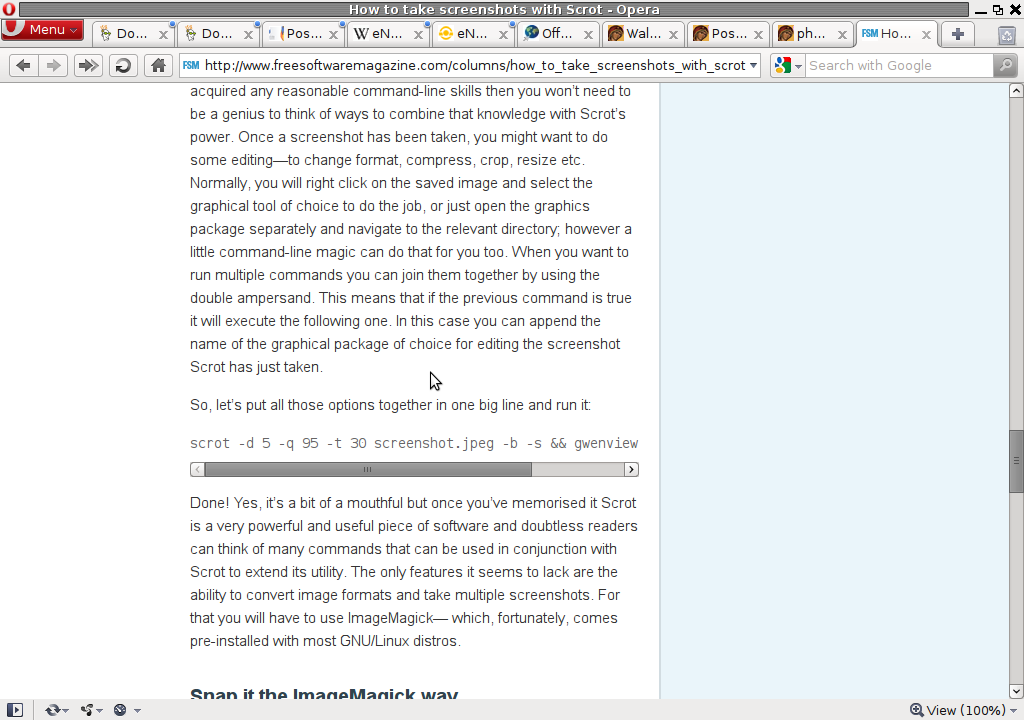 Shutter is a bit advanced piece of screenshot taking software if I have to compare with everything else I’ve encountered for Linux.

2.6. Upload the picked up snapshots with Shutter to an External FTP host
If you’re further interested into the tool you might check the shutter project website I had one only problem after installing shutter to my computer. The default installation of Shutter on Debian Testing/Unstable does try to save the taken screenshots automatically to my main root “/”, and since I’m executing the program as a non-root user it failed to save the screenshot picture.
To fix that I had to go to Shutter’s:

and change the default directory it’s trying to save the taken snapshots with shutter to my home directory.

3. Taking a screenshot on Linux terminal with scrot

There is a tiny little console probgram called Scrot that makes taking screenshots pretty easier.
I used to use this program quite a lot back in the day on my old (overclocked Pentium 190 Mhz) machine and the good old Window Maker.

Using scrot is quite easy. Let me give you a few examples below.

The simplest way to use scrot on Linux to make a screenshot is via simply executing scrot without arguments:

Executing this command will automatically create a screenshot of your current screen in the directory from which scrot was invoked and you will have a file in format like for instance 2010-11-09-185142_1024x768_scrot.png

Another very handy way to use scrot is by invoking it to take a picture after a specific interval of time. Let’s say you want to have a snapshot of a picture appearing in a video round about in the 15 second of the video played.
To achieve issue:

There are plenty of other things you can do with scrot to make wonders with screenshotting but for more please refer to the proggie’s manual.
4. Taking a Linux screenshot on KDE with ksnapshot 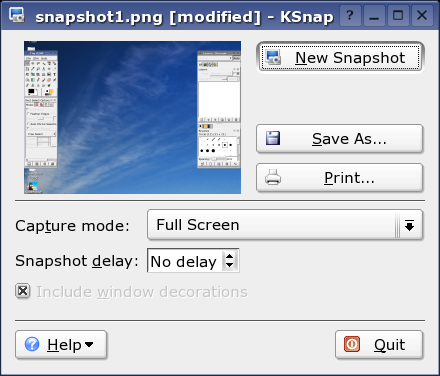 5. Taking a Linux screenshot with The Gimp 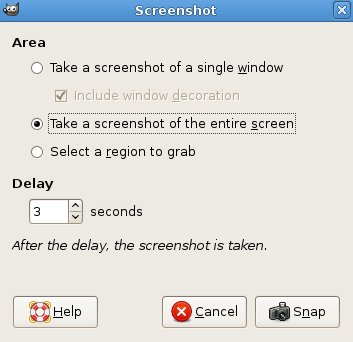 Taking a screenshot using Gimp is quite easy to do:
All you need is start up gimp and then go to:

Gimp screenshot taking is quite advanced as well and supports the following options:

This is another alternative way to scrot to take a screenshot but you will need to have the imagemagick graphics manipulation package installed on your GNU/Linux.
To take the screenshot with the import program part of the imagemagick package do issue:

If you want to have a screenshot after a delay with the import command execute:

Tags: Taking screenshots on Linux on major graphical environments and in terminal

Tags: Taking screenshots on Linux on major graphical environments and in terminal

This entry was posted on Tuesday, November 9th, 2010 at 11:38 pm and is filed under Linux, Linux and FreeBSD Desktop, Linux Audio & Video. You can follow any responses to this entry through the RSS 2.0 feed. You can leave a response, or trackback from your own site.