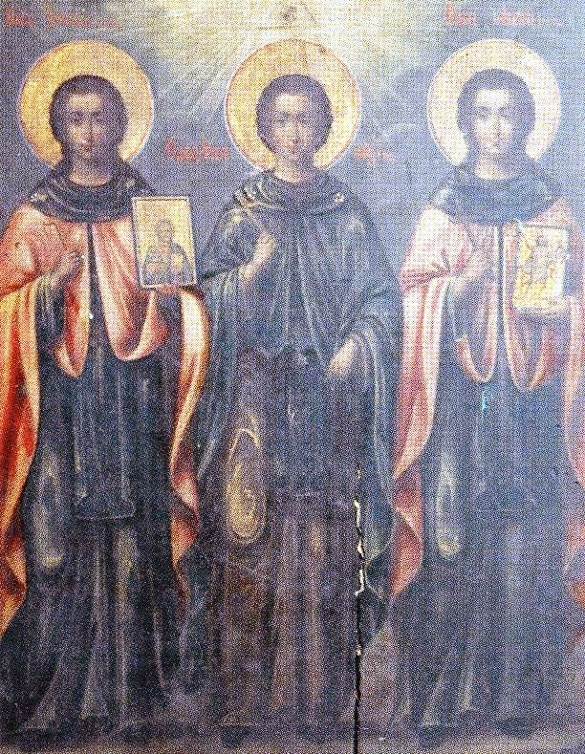 Holy Reverend Martyr Yakov ( Jacob) was born in one of the Bulgarian village of the Kostur region in ex-Bulgarian Macedonia in the distance year 1520.
His parents names were Martin and Parascheva.
He was an experienced cattle breeder and through hard work became quite rich, but his own brother, out of envy, slandered him to the Turkish authorities for hearing the false rumor he allegedly found a hidden fortune. Saint Yakov is a saint of the pleiad of great Bulgarian saint martyrs, sadly little known today in Bulgaria today.

Therefore, Jacob sold his sheep, left his native land and went to Constantinople, where he became even richer.
Once he heard a Turk praising Christianity and telling how his wife was cured of madness through the prayers of Saint Patriarch Niphont.
Yakov was very interested in this and went to the patriarch.

The conversation they had so touched his soul that he gave away all his wealth and retired to the Agios Oros Holy Mount Athos monk republic.

There he revived the deserted Iverion old skete "Saint John the Forerunner" and lived under the guidance of a certain elder Ignatius.

Jacob labored so diligently and reached such a high spiritual perfection that he was honored with heavenly revelations: he was shown the abodes of heaven and the dungeons of hell, he began to penetrate the secret feelings and thoughts of his visitors, e.g. received by God the gift of clairvoyance.

The Lord also honored him with the gift of miracles: at his prayer, spring water flowed into the renewed hermitage, which has been called "the agiasma of Saint Jacob" ever since; twice the jar of oil filled itself when run empty by his prayers;
With his prayer he healed a Vatopedian novice monk who was seized with rabies; once rain fell from heaven in a time of drought; another time watered thirsty travelers with the stream that came out of earth but his prayers springed waters.

Desiring to give himself up to complete solitude, he and six of his disciples retired to the inner part of Mount Athos, where he spent days and nights in complete silence except on Saturdays and Sundays.

Finally he wished to go into the world to preach piety. His disciples followed him.
Everywhere the people flocked to receive his blessing and listen to his sermon.
He also performed many miracles with his prayers: he healed the insane, handed over to Satan an unrepentant Christian sorcerer to weaken the flesh (1 Cor. 5:5).

But the local Bishop Akakios, out of envy, reported to the Turkish authorities that this old foreigner was gathering a lot of people around him and could cause some rebellion.
The monk foresaw the rising danger and spent the whole night in prayer and calmly waited for the divine liturgy to end.

Early in the morning, 18 Turkish soldiers surrounded the church and captured the elder Jacob with two of his disciples – deacon Jacob and monk Dionysius (some other Biographers speak about 6 desciples).

The Turkish bey (local place governor) investigated the reverend for a long time, sometimes with exhortations, sometimes with threats, sometimes with torture, but finding no guilt in him, threw him into prison for 40 days, until he reported him to the High Gate (highest authority in the Ottoman Turkish Empire) and received an order from there.

After some time, an order came from Sultan Selim to bring the saint and his disciples to Edirne (Odrin), so that he himself could judge them.

The Sultan strictly investigated them. Venerable Jacob calmly spoke only the truth.

The Sultan ordered that he and his disciples be beaten with whips.
Not a word, not a groan was heard from the reverend.
Then they tightened Yakov and desciples deacon Jacob and Dyonisios heads with screws.

The saint did not suffer from this torture, but one of Deacon Jacob's eyes popped out of orbit.
In the meantime, the Sultan learned that the old martyr was prophetically predicting the future and jokingly asked St. James: "How many more years will I live?"
The reverend replied, "Nine months!" 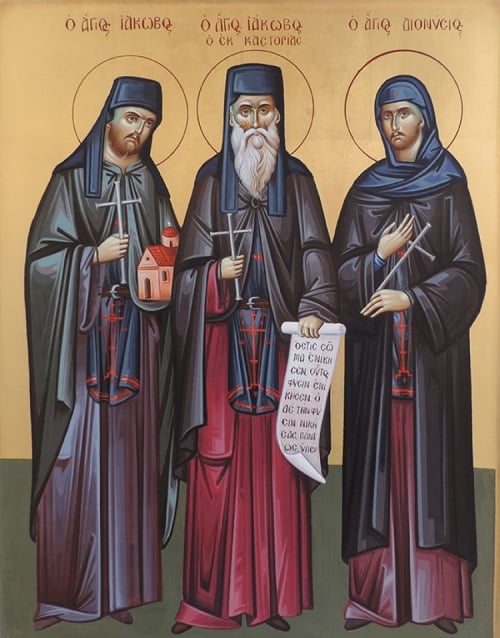 His prophecy came true.
In order to find a sufficient reason to kill the innocent, the embittered sultan sent one of his pashas (bashaw – higher rank in the Ottoman political and military system, typically granted to governors, generals, dignitaries, and others ) to them in prison to ask them questions about Christ and Muhammad.

Venerable Jacob boldly confessed that only Jesus Christ is the true God, which enraged the sultan and served as an occasion for new cruel tortures:

they tore apart the bodies of the martyrs, broke their jaws, cut thongs from their skins and then watered their wounds with vinegar and salt, they beat them cruelly with whips, burned their thighs with fire.

They were tortured in this way for 17 days. At last the Sultan sentenced them to be hanged (perhaps because he knew about Jude the Escariot and wanted to mock the saints).

Before the sentence was carried out, Venerable Jacob stood among his disciples and invited them to pray for the world and for the Church, thanking the Lord for honoring them to inherit the kingdom of heaven.

All three fell on the ground and worshiped God.

Then Venerable Jacob took out three hidden particles from the life-giving Mysteries of Christ and with them he gave communion to himself and his disciples.

Then he raised his hands and eyes to heaven and cried out with a loud voice:

"Lord, into Your hands I commit my spirit!" And immediately, to everyone's surprise, quietly died.

This happened on November 1st, year 1520 A.D.
Some Christians bought their honest holy relics and buried them with honors.
Over their tombs on Sundays and holidays light appeared and miracles took place.

Later, their holy relics were transferred to Mount Athos by christians, and took them three kilomers away from their in the village of Albani and laid them in three separate graves.

Over their graves on Sundays and holidays, light appeared and miracles took place!

Later from there to the area of ​​Galatista near Thessaloniki, where the rest of the monk's students settled in the monastery "St. Anastasia (Deliverer from Potions) Uzorushitelnica".

Some Christians bought their holy relics and took them three kilometers away from their homeland, in the village of Albani, and laid them in three separate graves. Over their graves on Sundays and holidays, light appeared and miracles took place. Later, their relics were transferred to Mount Athos, and from there to the village of Galatista, Thessaloniki. There was a small monastery "St. Athanasius Uzorushitelnica", which the rest of the disciples of the martyr Jacob revived. The memory of the martyrs is celebrated on November 1.

There is a special service for the Reverend Martyr Jacob and his disciples, which is served on the day of their memory in the Iverion skete "Saint John the Forerunner" on Mount Athos and in the monastery "Saint Anastasia".

The Biography compiled out of:

1. © Lives of the Saints. Synodal Publishing House, Sofia, 1991, edited by Parthenius, Bishop of Levkia and Archimandrite Dr. Athanasius (Bonchev).
2. Hristo Temelski From the collection Saints and spiritual leaders from Macedonia

This entry was posted on Tuesday, November 1st, 2022 at 7:49 pm and is filed under Christianity, Educational. You can follow any responses to this entry through the RSS 2.0 feed. You can leave a response, or trackback from your own site.