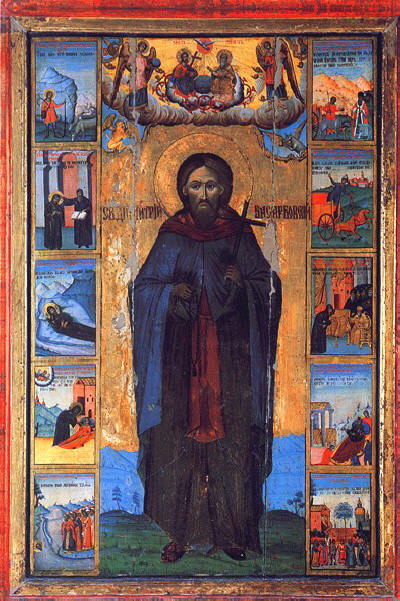 Reverend Dimitrii Basarbovski lived near the village of Basarbovo, Rusensko (nearby today's Bulgarian city of Ruse).
He performed spiritual feats regularly.
According to instructions from Reverend Paisiy Hilendarski's "Bulgarian Slavonic History" / Istoriya Slavyanobolgarskaya , he must have lived in the 17th century.
His holy relics rest  in Bucharest.

Venerable Dimitrii Basarbovski was born in the village of Basarbovo, which is located 8-9 kilometers from the city of Ruse. Venerable Paisiy Hilendarski in his "Slavonic-Bulgarian History" which was a key book to bring back the memory of the 5 century enslaved Bulgarians under the Ottoman Turks about their long and glorious history and holiness the Bulgarian Empire and the Bulgarian Church possesed. Slavonic-Bulgarian History points to 1685 as the most probabe year of his death.

According to St. Paisius, he was an ordinary civilian.
He lived simply. He had several sheeps.
He planted a small vineyard by a river. Saint Dimitrij made a little hut there.
Spent his whole life alone. He pleased God with his holy life.
When time came for God to take out his rightous soul, died in the same place, where he spent his whole life and was buried there. 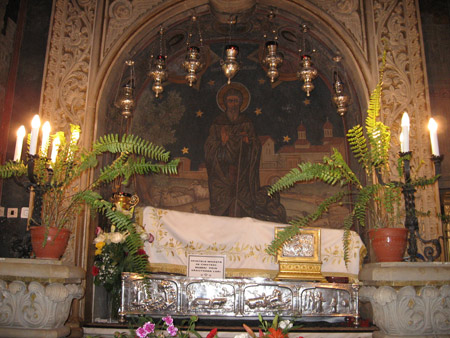 Later God revealed his incorruptable holy relics to some men. The latter were transferred to the village of Basarbovo, Rusensko. Healings took place near them.

Thus, with his simple life, Saint Demetrius shone among the Bulgarian people.
God glorified him posthumously with many miracles and glory as great intercessor of man in heaven.

According to the Romanian synaxar (The Church service book), he was a village herdsman. He had a sensitive conscience.Possessed a great fear of God.

Once, while driving the animals to the field, he inadvertently stepped on a bird's nest with the baby birds in.
This incident affected him so much and, he did not put on a shoe on the guilty foot for three years, during winter and summer, as a punishment.

Another tradition says that he was married but childless. After the death of his wife, he entered the cave monastery near his native village.

There he was ordained as a monk. He worked diligently.
Cultivated in himself all the sublime virtues of a true monk in the same fashion as the desert fathers. Foresawing his death, left the monastery, lay down between two stones on the bank of the nearby Lom river, and there he surrendered his soul to the Lord.

After a while a torrential rain fell. The water swept these two stones along with the holy relics of the reverend into the river. 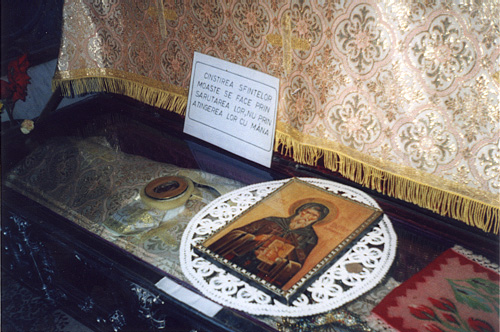 The relics lay in the water for some time. Venerable Dimitriy appeared to a raving (possessed) virgin from the village of Basarbovo and told her that he would cure her of her illness as soon as he took his relics out of the river.

The relics were taken out and placed in the village church. The frenzied virgin was cured.
Many other patients from various diseases also received such a gracious healing.

Two God-loving sisters from the nearby village of Chervena Voda reverently worshiped the reverend.

They secretly asked to steal a piece from his relics for their newly built temple.
But their car could not start until they repented and returned the stolen particle.

Nicephorus, Metropolitan of Tarnovo, came to worship the relics with a group of clergy.
Monk Lavrentiy was also in this group.
He tried to bite off a piece by kissing the relics, but his mouth remained open until he repented with tears in his eyes.

Preslav bishop Ioanikiy (Joachim) fell seriously ill. He asked to be taken to Venerable Demetrius of Basarabia.
They laid him by his coffin. After the Divine Liturgy was celebrated, he recovered completely.

A Turk decided one night to rob the reverend's church.
He touched the silver lamps.
His legs stiffened immediately.
In the morning worshipers carried him around the church in their arms.
This man until the end of his life crawled through the streets of the city of Ruse and begged for alms.

The Ugro-Wallachian voivode wished to have the relics of Venerable Demetrius in his home church. With such a mission he sent boyars and priests to Basarbovo. 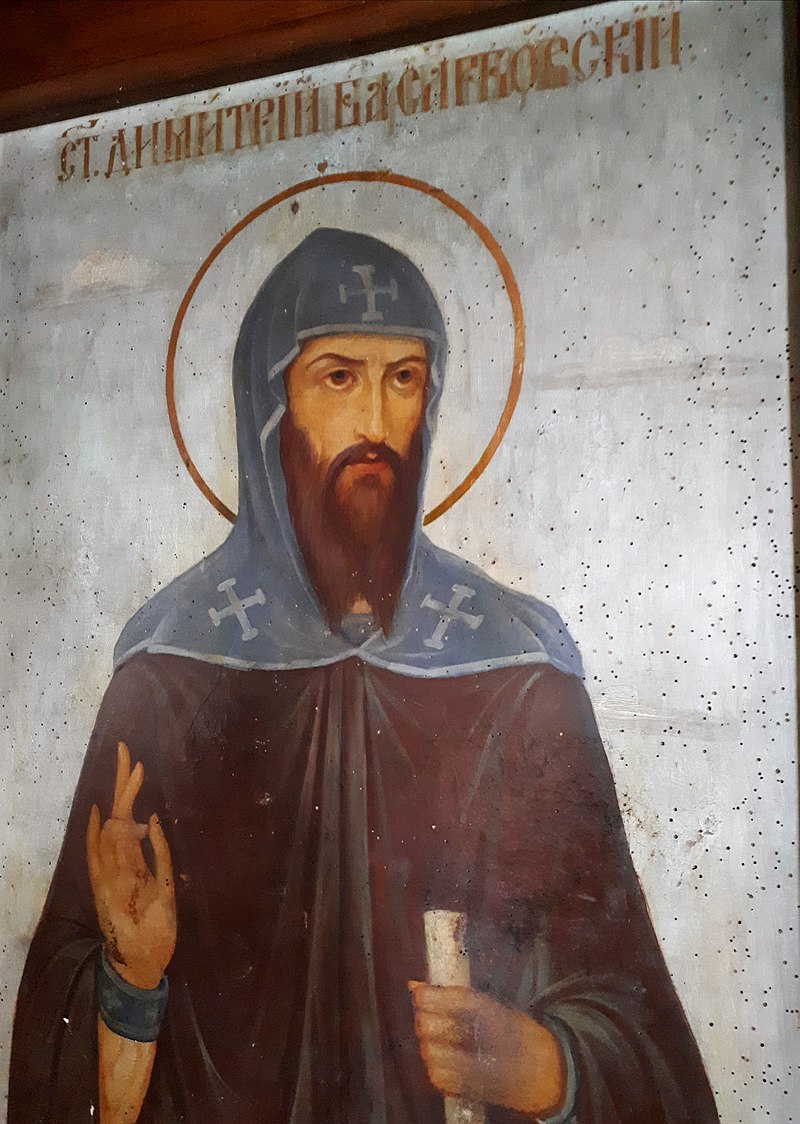 But the saint did not allow his relics to be transported across the Danube.
Amazed, the messengers decided to find out the will of the God-pleaser. They placed the relics in a cart with previously unharnessed bullocks.
They let the animals loose.
The youths drove the car straight to Basarbovo and stopped in front of the church.

In 1774, when one of the Russo-Turkish wars was raging, the Russian general Peter Saltykov ordered the relics of Venerable Dimitriy to be taken to Russia. Dimitar Poklonnik, a Bulgarian from Bucharest, who served as a translator for the general, asked him to leave them in Bucharest as compensation for the losses of the Romanian people in the war. The general agreed. Since then, these holy relics rest in Bucharest, in the Church of the Three Saints.

The monastery dates back to the period of the Second Bulgarian Kingdom (XII-XIV centuries), but the earliest data date from the Ottoman tax registers of 1431.

There it is marked as "Besaraba" – a property with 14 households.

At the same time, the monastery was marked as "the timar of the great voivode" – meaning Ivanko Besarab – father-in-law of Tsar (King) Ivan Alexander.

According to another legend, the Basarbov monastery was dedicated to St. Theodore Tiron and St. Theodore Stratilates.
The founder of the monastery was Queen Teodora Basarab – the first wife of Tsar Ivan Alexander and daughter of the Wallachian Duke Ivanko Basarab.

The nearby village of Basarbovo is also named after the voivode.

The most famous inhabitant and eternal abbot is Saint Dimitar Basarbovski, who spent a large part of his life in the monastery.

During the Russian-Turkish war (1768 – 1774), the relics of the saint were transferred by the Russian General Ivan P. Saltikov in Bucharest and placed in the Metropolitan and now Patriarchal Church "Saints Saints Constantine and Helena" on July 13, 1774, with the idea to later move them to Russia, saint Demitrios of Basarabia's desire was to remain in Bucharest where they are still laying today.

In 1937, monk Chrysant lived in the monastery and began to renovate it.
The  feast day of the monastery is on October 26, the day of St. Dimitar The Myrrh-bearer. 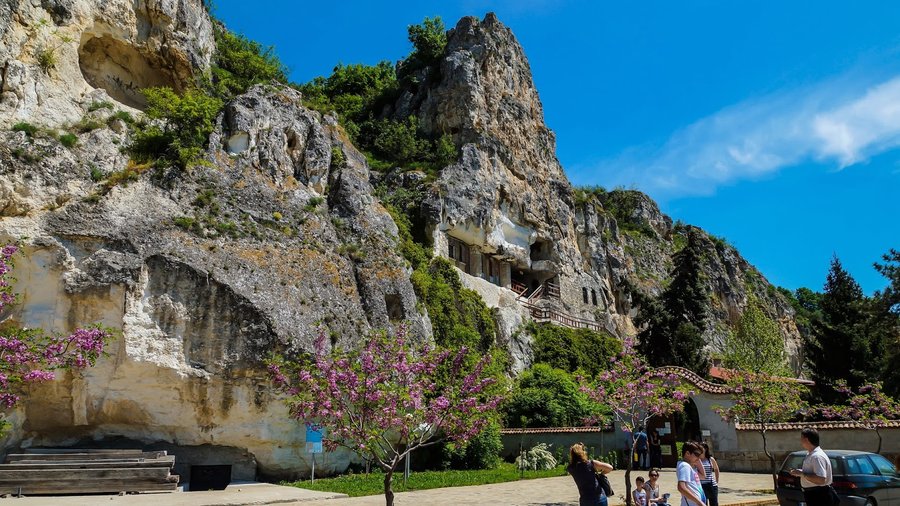 As Saint Dimitri Holy relics are currently away from the Bulgarian home land, obviosuly as the saint's memory was more more remembered and venerated in Romania. Today the monastery who was started by his prayers and veneration of his Holy relics "Basarbovski Monastery" near the Danube river Ruse, did not possess any more his holy relics. 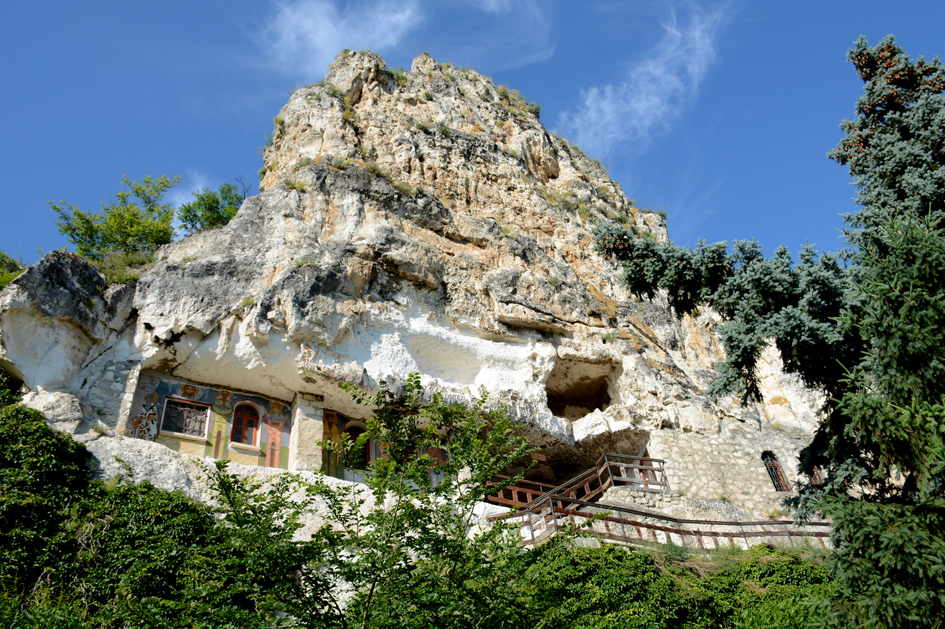 In 2005, at the request of the Bulgarian Patriarch Maxim, an icon with the image of St. Dimitar of Basarbov, in which a part of his holy relics is embedded was presented by the Romanian Patriarch Teoktist to the Basarbov Monastery. 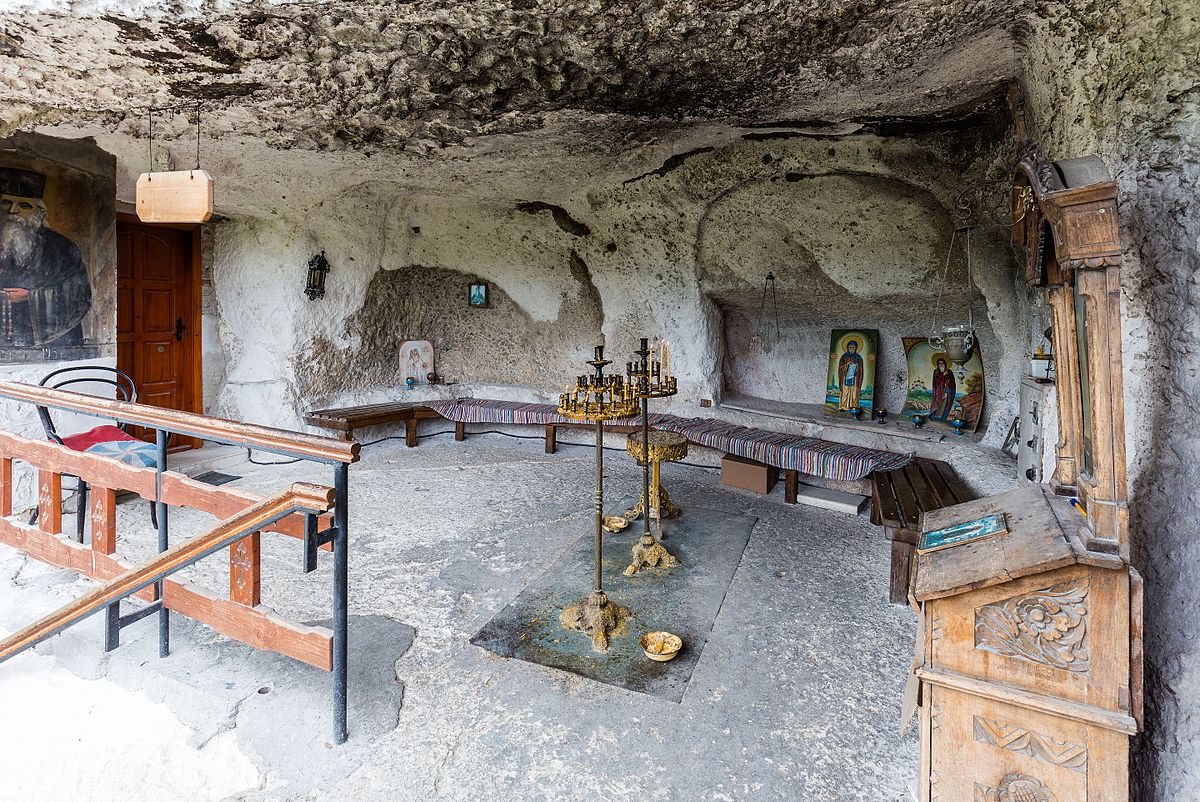 It is notable, to mention that according to the monk and one of most notable Ascetics and Saints of our times Saint Porphyrios of Kafsokalyvia († 1991), the prayer of the hermit monk works miracles and his contribution is greater than that of the most worthy preacher. 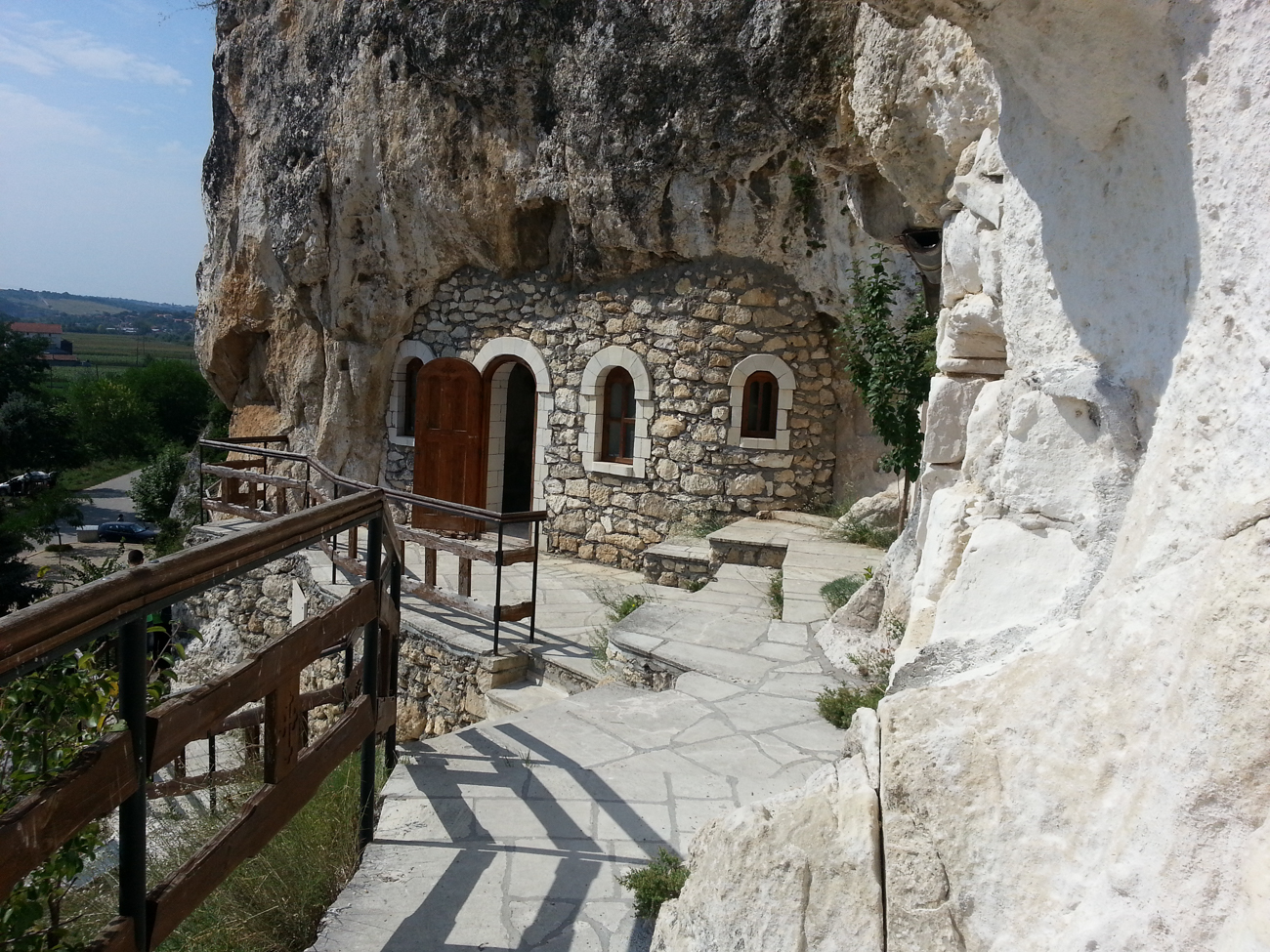 This entry was posted on Thursday, October 27th, 2022 at 6:00 pm and is filed under Christianity, Curious Facts. You can follow any responses to this entry through the RSS 2.0 feed. You can leave a response, or trackback from your own site.