St. Prohor Pshinski. Mural from the 15th century in the church "St. Archangel Michael" in Saparevo near Kyustendil. Source: bartol, bartol.blog.bg The Rev.

Prohor Pshinski was a Bulgarian by birth from pious parents in the Ovce Pole region of northern Macedonia. It was given by God to childless parents for their prayers and sucked in along with his mother's milk and her high piety. When he grew up, his parents insisted on marrying him. But he once heard in the temple the words of the Savior: "He that loveth father or mother more than me is not worthy of me," (Matt. 10:37). the town of Vranje in Yugoslavia. He lived in a cave where water springs for 32 years. Once a frightened deer ran to him, chased by a hunter who soon appeared.

At his first meeting, the monk called the hunter by name and predicted that he would soon become a Byzantine emperor. At that time Bulgaria was under Byzantine slavery (1018 – 1186). And indeed, after some time this man reigned under the name of Roman Diogenes (1067-1071). Astonished by the fulfillment of this prophecy, he discovered the incorruptible relics of the late Prohor Pshinski and built a large temple in the name of the saint on the site of his asceticism. His holy relics were laid there and a monastic fraternity gathered.

The prologue biography of St. Prohor Pshinski is an original ancient Bulgarian writting, known in a single transcript in the New Prologue from the beginning of the 14th century (GIM, Uvar. 70). Under the date of October 19, the Venerable Hermit Saint is mentioned next to St. Ivan Rilski. Both texts are published by Kl. Ivanova (1977). D. Chesmedjiev (2009) points out that the cult of St. Prohor Pshinski is poorly fixed in the written tradition. All the details about the saint are known from his prologue. St. Prohor lived in the 11th century, working in the Kozyak mountain (near the village of Staro Nagorichino). After his death, his relics were transferred to the church he founded, called Pshinya, where he was healed.

His cult probably originated during the Byzantine rule. His memory is celebrated on September 13 and October 19. In the New Prologue, in addition to biographies of St. Ivan Rilski and St. Prohor Pshinski, there are also biographies of St. Achilles of Larissa, St. Simeon of Serbia and others. 30 years ago Kl. Ivanova (Ivanova 1977: 59) has suggested that the manuscript was compiled in the Pshin Monastery itself, but the spelling and language features of the collection are Serbian. According to the latest research by the same researcher, Nora's prologue originates from Jerusalem and was created in the Serbian monastery "St. Archangel Michael ”(Ivanova 2008: 68–70).

Biography of Saint Joachim of Osogovo

Images of St. Ivan Rilski and St. Joachim of Sarandapor from the Poganovo Monastery, end of the 15th century. It is not known where he came from, from his life it is known that he came from the west, according to Ivan Snegarov, perhaps from Zeta, in the Osogovo Mountains, where he sought monastic asylum.

An unknown boyar from the village of Gradets, not far from Kriva Palanka, today in northern Macedonia, shows him the place he was looking for monastic solitude – a cave by the Sarandapor River, today's Kriva River. Here St. Joachim spends his life as a hermit, in fasting and prayer, and the local Bulgarians revere him as a holy man. 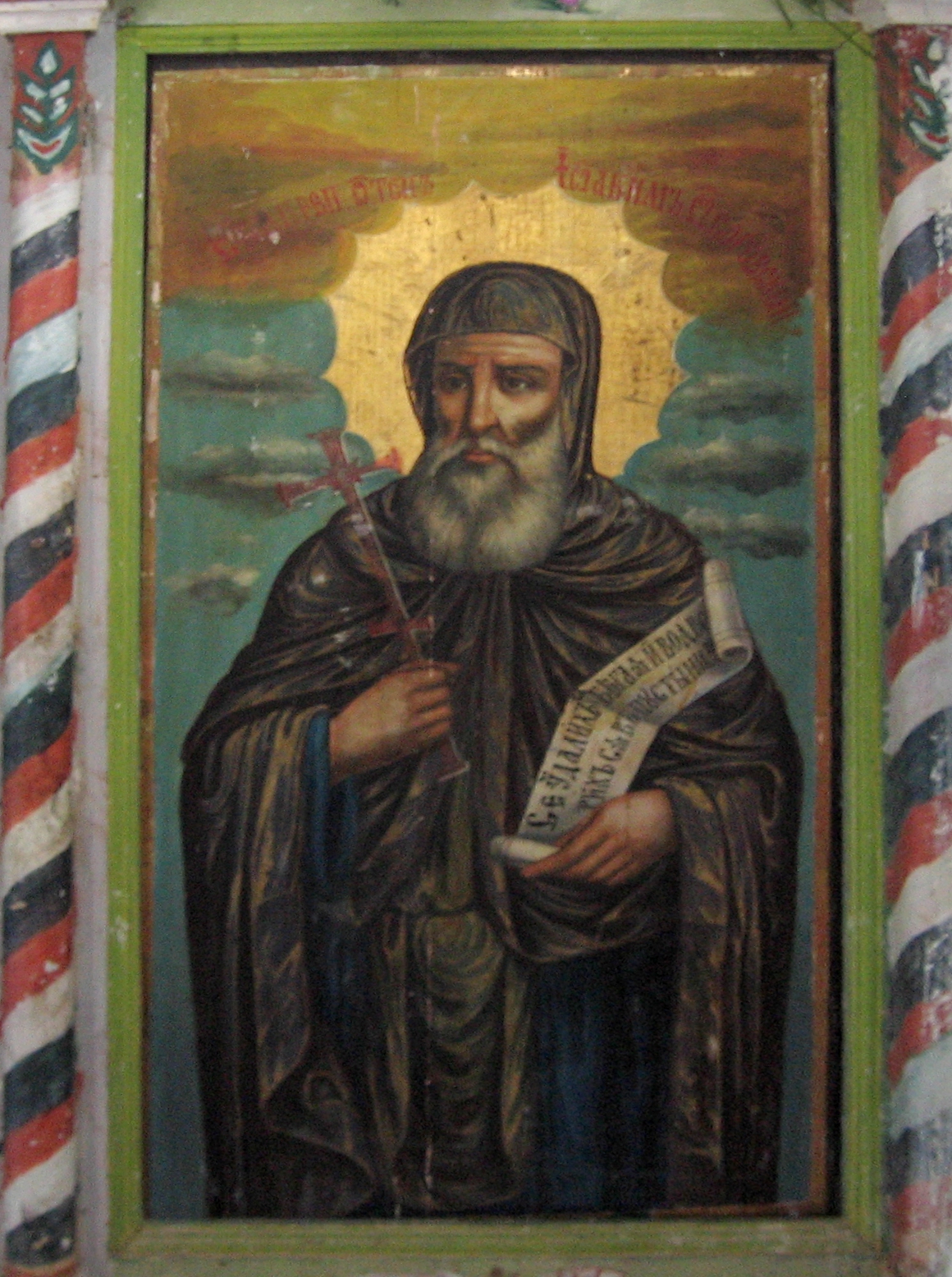 Joachim Osogowski died on August 16, 1105.On this date the Bulgarian Orthodox Church commemorates him.

Years later, the widowed priest Theodore of the Sheep Field settled in the place of Joachim's hermitage, adopting the monastic name Theophanes. After his saint appears, he discovers his miraculous relics, which are laid in the church built in his memory. In the 12th century, the cult of St. Joachim became so popular in northwestern Macedonia that a monastery of the same name was built around the temple. 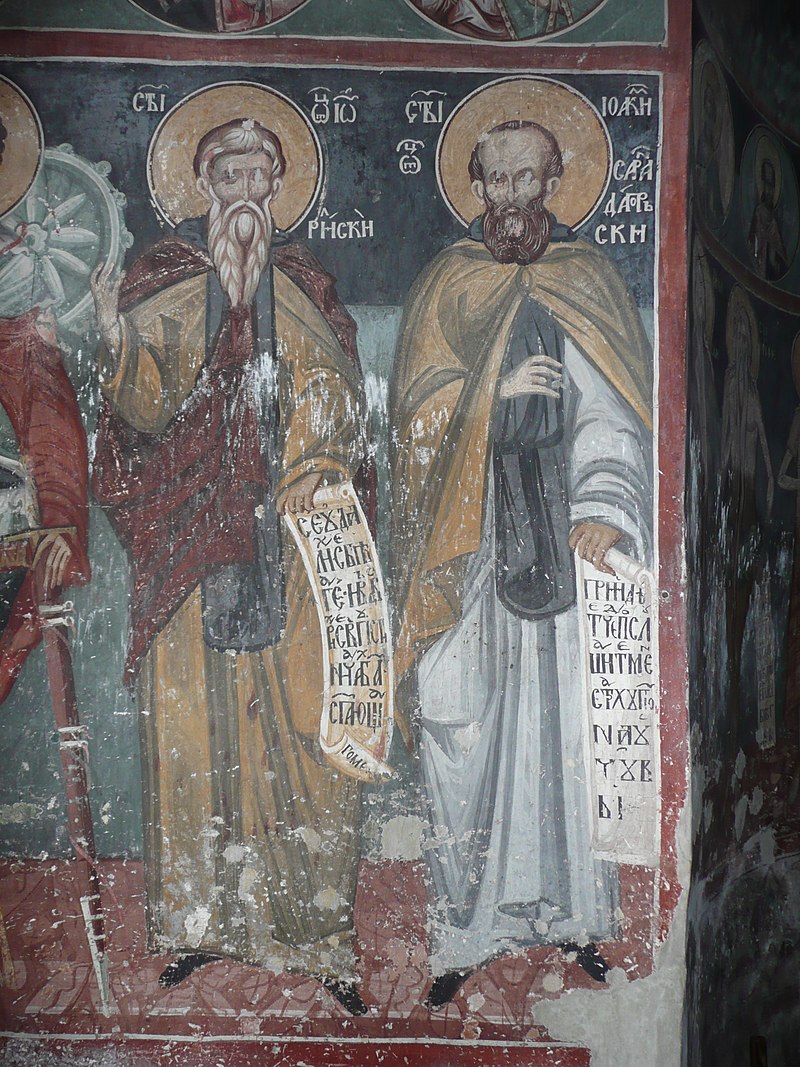 Images of St. Ivan Rilski and St. Joachim of Sarandapor from the Poganovo Monastery, end of the XV-th century ( the three most famous spiritual pupils of Saint John of Rila )

Reverend Gavriil Lesnovski is one of the three great followers of the Rila desert dweller St. Ivan Rilski. He lived in the XI – XII century. He was born in the village of Osiche, Palaneshko (Macedonia). He came from rich Bulgarian parents and received a good education. When he was old, his parents betrothed him to a good-looking bride. Soon, however, his fiancée died. Then he entered a monastery and became a monk. With the inheritance he received from his parents, Gabriel built a monastery with a church named after St. Archangel Michael in the Lesnovo Mountains, northern Macedonia, near the present town of Kratovo.

The Venerable Father gathered monks, appointed an abbot, and he himself secluded himself in the mountains of desert life and silence, doing so for 30 years. He then returned to his monastery and died on January 15. Thirty years after the death of the Venerable Gabriel, a Russian monk named Joseph in the town of Sredets (Sofia) – at the suggestion of the saint – went to the place where the Venerable struggled, found his grave, found his incorruptible relics, laid them in a coffin and provided for prayer worship to believers.

For many years the holy relics of the Reverend Gabriel rested in the Lesnovo Monastery and performed many miracles. Probably in the thirteenth century one of the Bulgarian kings of the Assen dynasty brought them to his capital Tarnovo and laid them in the church "Holy Apostles" in Trapezitsa. According to the Reverend's prologue of 1330, "they have lain there until now and give healing." After the Ottoman invasion of Bulgaria, traces of the holy relics of the Venerable Gavriil Lesnovski are lost. The monastery he founded was later named after him and became an important literary center. © Lives of the Saints. Synodal Publishing House, Sofia, 1991, edited by Parthenius, Bishop of Lefkada (Levkijski) and Archimandrite Dr. Athanasius (Bonchev).

The Saints Prohor Pchinski, Joachim of Osogovo together with Saint Gabriel of Lesnovo according to Bulgarian Orthodox Church tradition are considered to be 3 of the many pupil monks of Saint John of Rila who spread the light of Holy Eastern Orthodox Christian faith in whole Bulgarian lands and from there towards Russia and far west Serbia, Croatia, Hungary who historically has been orthodox and later converted to Roman Catholicism.

I was interested how Ancient Bulgarian writting letter used to be and found a video and youtube worthy to share.
Ancient Bulgarian, became the basis for many Slavonic languages – modern Serbian, Macedonian, Slovenian, Croation and maybe most importantly modern Russian. In practice the so called Church Slavonic is Ancient Bulgarian language. Back in the day Ancient Bulgarian writing was invented by the Holy Brothers St. Cyril and St. Methodius for reasons to translate the Holy Bible for Slavonic people who lived in territory of nowadays Bulgaria and Serbia. Their pupils later spread the Church books and Christianity as well as writting and all translations to nowadays Russia, Belarus, Ukraine, Moldova and Romania. Romanians just until recently used cyrillic until 1920, and still cyrillic is widely used in Church. The video above is very interesting, as some of the words mentioned as ancient Bulgarian words are still figurating in Russian and Serbian language, but for some reason evolved or disappeared from modern Bulgarian. People should know their roots, especially Bulgarian who was so great nation and still are but because of western influence and global consumerism, our national identity and significance is tried to be diminished. If you're a Bulgarian read this, know your roots and How great nation we were and we continuously are and will be! Don't be ashamed to be Bulgarian on the contrary consider it as a great honour. There is no other nation in the Balkans who survived under 500 years of Ottoman Turkish Slavery except us Bulgarians and Serbs. Over this V centuries of slavery we kept our Christian faith, language and writting intact. This is a nation heroism worthy for praise and astonishment! We Bulgarians are nation worthy to respect, we are not stupid or inferior as often modern world progress is trying to convince us. Our nation is not among the top developed countries, for the reason, we Bulgarians are more spiritual oriented and most of time in history our ancestors looked and lived taking in their mind and heart eternal life in Christ and not the temporary earthly progress. Still there are plenty of Bulgaria, who are like this, still Bulgarians have great spirituality, but we forget our faith, we forgot what kept us alive as nation over the last 13 centuries of existence. Go back to the roots, read the history and learn the old alphabet and words, all this will enrich you and give you easier way to learn the other Slavonic nations. Next time they ask you about nationality say you're Bulgarian with dignity!