Life was easier when Blackberry and Apple were just fruits 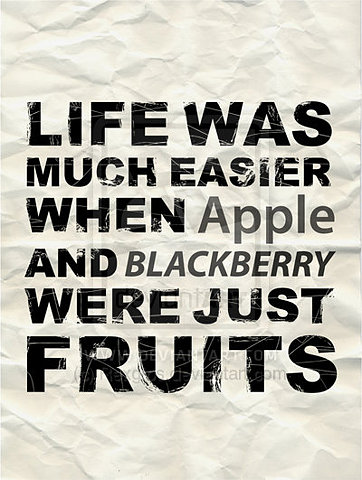 Sad but true fact Life was much easier when BlackBerry and Apple were just fruits!.

I don’t know about others but I have difficulties to adjust my body to the fast pace life has taken. Life would was easy and more fun without all this technology. Now even going to a pub you can’t escape the “doom” of technology. If the tech hype continues the way it does or something drastic doesn’t happen I guess all people on earth will get completely crazy …

I thougth about how this techno-mambo jumbo can be stopped on a wide scale and the only idea I have is a weapon that blocks all tech equipment world-wide. I hope someone will develop it soon and press the destory button SOON ! 🙂

Today I have Marketing exam. Ofcourse as usual when I have exams I haven’t studied enough, and again I’m in the situation realizing I don’t know anything. I depend 100% on God’s grace to take that exam. Why I’m so dumb never study when

I have what I have. I can’t change my self I can’t study something I’m not interested into. Marketing is a subject which is simple but for Jerks IMHO :]. The logic of marketing is too abstract.

And yes what’s happening with me the last days. Well I’m feeling good now Praise the Lord. I’ve no idea what I should do with my life. I have 2 re-exams for now or maybe 3 ( I don’t know the results from the Research & Statistics Exam ).

The last few days I ran FreeDOS and Windows 2000 Pro SP4 under FreeBSD 6.2 with qemu. FreeDOS’s performance is very nice despite the fact it is emulated. The Windows is running a little laggish although I ran it with kqemu ( Experimental Module for qemu which enhances the typical qemu speed ). Yesterday we drink a dark beer with Nomen into the “Happy Person” Pub. My passion for computers is starting to come back again.