Saint Methodius was the bigger child of the two brothers enlighteners of Bulgarian Lands and the Slavonic nations Saint Cyril (known as The Philosopher) and Saint Methodius born in Thessaloniki
a region of the Byzantine empire. Thessaloniki and its regions according to manuscripts has been mostly inhabited by Slavs at IX century.

In his young age he has chosen to be a Byzantine army man. For 10 years he has been assigned to govern a region of Slavonic lands part of Byzantine Eastern Empire.
Even though he had been a successful in his worldly career and has been taking a respectful service for the Byzantine Emperor he felt the calling of God, gave up his high position in
aristocracy and entered one of the many monasteries of the empire in mount of Olympus Asia Minor region. Soon after to the same monastery came his younger brother Constantine
Since that moment the two brothers never departed until death of Cyril who died in Rome. And even in his death has been highly venerated by the Pope and considered saint even in
time of his burial at the famous Basillica Church San Clemente where they reside for veneration by Slavs even to this day. 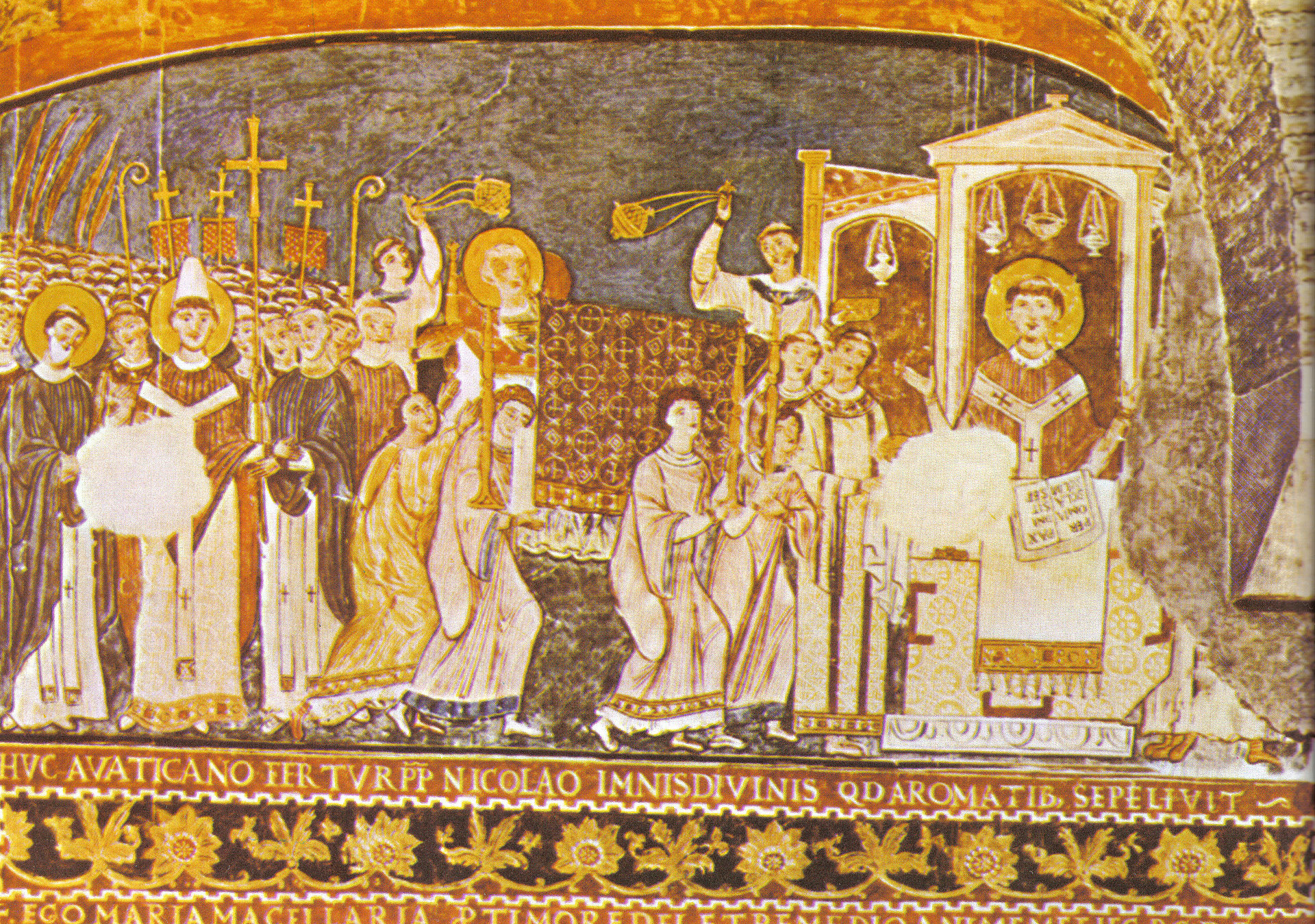 The two God chosen man also achieved a glorious deed which was not achieved by anyone before. The creation of the Glagolic Alphabet which become the foundation of the Cyrillic alphabet
currently used of about 300 000 000 people worldwide including by us Bulgarians. The new language was developed to be able to share the high truths of Christ the Gospel and his Church services and books  and
most impotantly the eternal salvation prepared by God The Holy Trinity The Father the Son and the Holy Spirit for all those who love him and servce him. 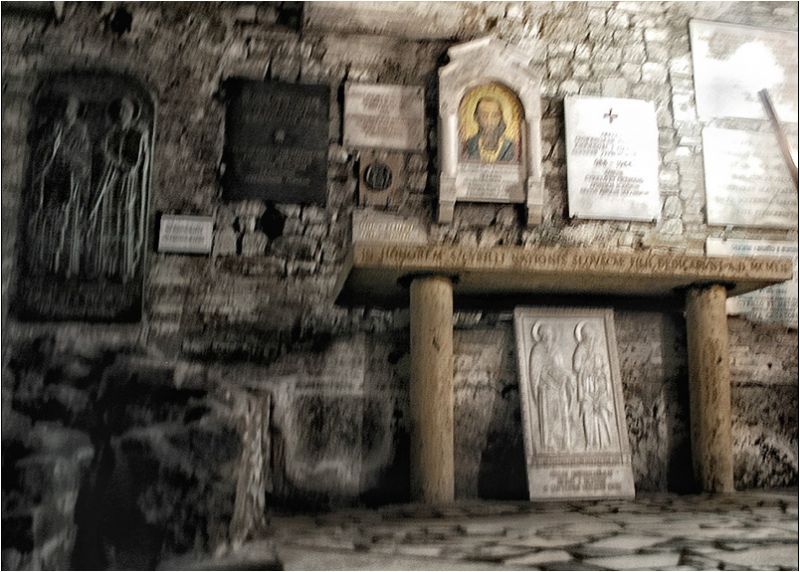 The Holy relics of Saint Cyril in San Clemente Crypt

As knowing the truth about Heaven and Hell and the Heavenly
kingdom they were highly conserned for the high see of Slavs in the Empire who still have been in darkness of idolatry and paganism. Inspired by God they soon creating an Alphabet in which  translated the whole Holy Bible (The Gospel of Christ the Epistle books and Old Testament book  and Church service books translating the Eastern Orthodox Holy Liturgy of Saint John The Crysostom and Saint John The Basil.
in language understandable for the Slavs. The glagolic alphabet has been soon translated to the Cyrillic Alphabet by the 7 pupils of Saint Cyril and Methodius and has been spread in Bulgarian lands first then in Serbia, Kiev
and rest of Slavonic nations. 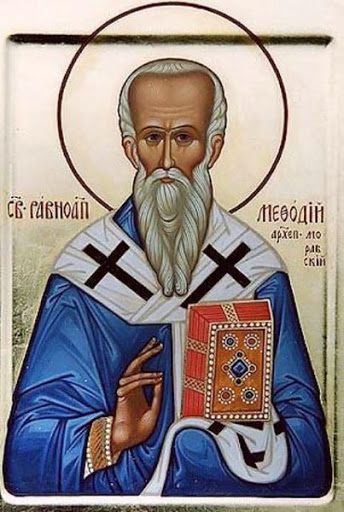 In Great Moravia a region today situated in Chech Republic the two saint brothers teached and baptized the local Slavs , teaching them the Eternal heavenly truths of the Gospel.
The German clergy envied the two apostle equal mans mission great success and tried to rebaptize and teach the already baptized according to a Roman Rite and spread their own influence pushed by a lust for power.
Hence Methodius (also called by Western histographs Method) has been chased away from Moravia by the German clergy to the nearby Pannonia, where king Kocel  who appreciated St. Methodius great deeds for his people and
not understanding why the German-clergy is chasing such a saintly man has moved him to Rome to Pope Adrian II-nd with an enquiry to ordain him a Bishop. The Pope ordained him almost immediately and accepted St. Methodius
and St Cyrilus with all his clergy in honour, because the 2 saints were bringing a highly esteemed gift the Holy Relics who were attained by them earlier in their Baptizmal Mission to The Hazars (an assignment given to them by the Eastern Byzantine Emperor
and successfully achieved).
During their travel in Herzon the two saints has found the Holy Relics of Saint Clement Ist the 4th Pope of Rome who has been exiled and passed away to Christ as a martyr in Herzon (Today's Crimea) in the distant 2nd century.
After his consecration in Rome saint  Metho has been raised from a simple Gospel preacher to the high clergy rank of Archibishop for Pannonia and Moravia, a region who has been under the rule of the Bishop of Rome.

The fight against the clean life of the saint continued with full power even after his raise to the throne of archibishopship. The envious pseudo spiritual missioners sent by the Pope hungering not for Christ but for earthly power slandered
frequently against Method. to the local prince. because Methodius was publicly rebuke their unclean life being filled with the power of Christ spirit who detests all uncleanness in man. At other times suggested to the pope that Methodius is
against the Western Church and eagers to cut Moravia and Pannonia from the diocese of Rome and give it to the Byzantines. In parallel the German "clergy" was frequetnly sending letters slandering against Methodius accusing him in inobedience to the Eastern Christian Emperor
and the The Great Church of Byzantium the homechurch of st. Cyril and Method. and to whom they were obedient still …
Methodius being already in advanced age had to go everywhere by person and rebuke and testify about himself that all this is a far away from truth. His enemies succeeded eventually and for 2 years and a half he has been thrown in prison without the knowledge of the pope.
Finding out about this ungodly deed of his inobedient power-lust german clergy Pope John VIII issued a special order bulla for the immediate liberation of his archibishop. 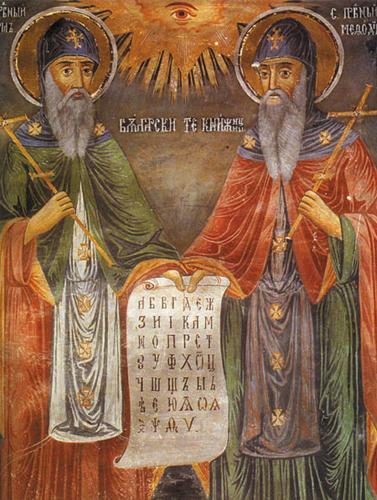 Icon of Saint Cyril and Methodius painting from 1848 y.

Even in this hardships saint Methodius never stopped to preach the Gospel to the Slavs and spread the Good news of Jesus Christ The Son of God enbodiment, life, Crucifix for the sins of all mankind anf Glorious Resurrection through which all those who believe are saved if they persist in the good deeds of Christ and stick to the trutfullness  of the Church of Christ which at the time of St. Cyrilus was before the Great Schism in year 1054, when the Roman Catholics has fallen away from the One Church who kept and preserved the head of the Church Jesus Christ teaching the Holy Eastern Orthodox Church.
Being even in prison Saint Methodius continued to translate The Holy books from Greek to the new language invented and adjusted for the Slavs talk.
He left us as a heritage the Translation Copy of All Books of Holy Bible except the book of Maccabees which is today only present in the Orthodox Bible and considered one of the non-canonical but God inspired books, as well as the Nomocanon (the book with rules and Church laws of the Church and the clergy).
Nomocanon comes from .(Greek: Νομοκανών, Nomokanōn; from the Greek nomos – law and kanon – a rule). It is  a collection of ecclesiastical law, consisting of the elements from both the Civil law and the Canon law.
Nomocanons even today forms part of the canon law of the Eastern Catholic Churches (through the Eastern Catholic canon law) and of the Eastern Orthodox Churches. 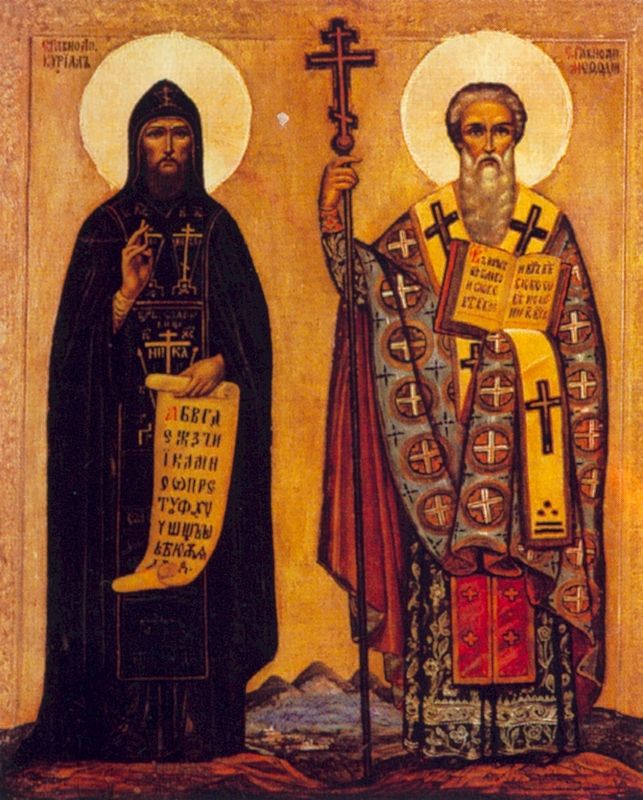 Saint Methodius the Slav-Bulgarian enlighter passed silently to Christ full of God''s Grace in saintship on 6th of April year 885 A.D. His burial was in Velegrad Chech Republic, and according to the Church tradition about his living  he "lays in the Great Moravian Church in the left side of the wall behind the alter dedicated to the Mother of God the Holy Theotokos Virgin Maria". A church service dedicated to him is still presented in the Bulgarian Church's manuscripts and a copies of it in preservation museums in Russia.

The deeds of Saint Methodius and Saint Cyrilus has a mark on the whole world's events. Even to this day as in Bulgaria, we have a translation of the Bible based on the Cyrillic language named after saint Cyrilus the brother of Methodius based on his started work to translate Glagolic alphabet to Cyrillic, continued by his pupils and fully completed by Saint Clement (Kliment) of Ohrid, who was warmly accepted by Saint Apostle equal King Boris I of Bulgaria. Thanks to him the deeds of Saint Methodius and their pupils and we have the cyrillic alphabet and Bulgarian Orthodox Church and spirituality even today. The deeds of Saint Cyrilus and the Cyrillic are recognizable worldwide in the face of the strange for the Western and the Asians Cyrillic language used by Russians.

Two Saints Cyril and Methodius has were officially proclaimed as a protectors of Europe recently by Pope John Paul II, for a reason as the ex-Pope has seen and experienced the powerness of prayers of the two saints while he was a cardinal in Bulgaria before his raise to the Roman Popeship throne about little know nowadays.

The Memory and veneration of Saint Methodius and Cyrilus logically are mostly observed in Bulgaria logically as Bulgaria was the first Empire country historically to accept the spiritual fruits the new language.  Many Schools and institutions, streets are named after the two saints.
The official Church veneration of St. St. Cyril and Methodius is on 11 in Church and  May in secular tradition. The Bulgarian Orthodox church has established a number of feasts connected to the two saints as they''re the prime patron saints thanks to whose prayers the Bulgarian Church has been established survived through centuries and conitnues its triumphal march towards the kingdom of heaven.

Let by the two saints Methodius and Cyril Bulgaria and Europe have Peace, Faith and Love and Enlightenment about the true teaching of Christ the Holy Orthodoxy!

Tags: about, after, against, age, ALL, and, Apostle, are, Army, army man, assignment, based, being, bible, bishop, bishop of rome, books, brother, Bulgarian, two

Tags: about, after, against, age, ALL, and, Apostle, are, Army, army man, assignment, based, being, bible, bishop, bishop of rome, books, brother, Bulgarian, two
Posted in Christianity, Everyday Life | No Comments »